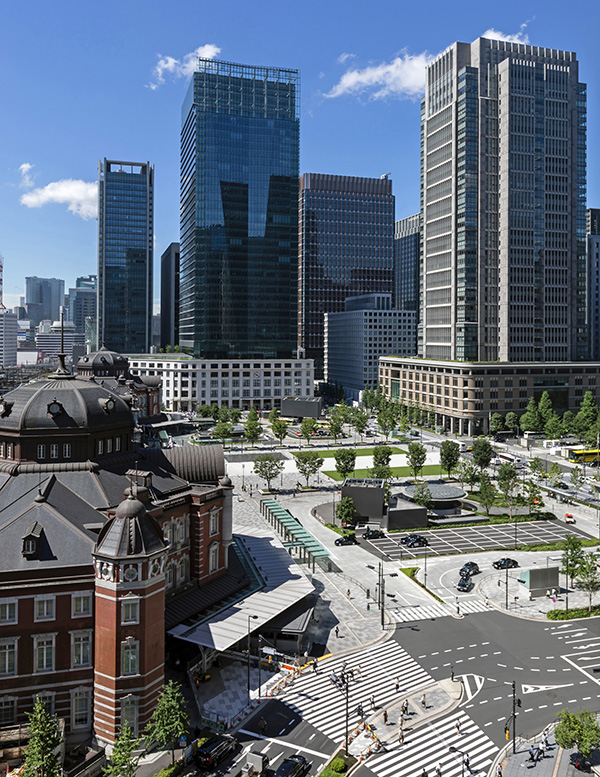 On a fine November morning, a group of senior executives from CEO Insights Group was privileged to take an exclusive walking tour of Tokyo’s Marunouchi district. Con­ducted by Mitsubishi Estate Co., Ltd., one of the largest real-estate developers in Japan involved in property management and architecture research and design, the tour was designed to show the deep history of Marunouchi and why it’s one of the most desirable places to work in Tokyo. The time our group spent going through the area brought insights to the CEOs and also exposed Mitsubishi Estate to the interests and priorities of the multinational corporations as they conduct business in Japan and greater Asia.

Established in 2004 by Spencer Wolfe, chief executive officer of AINEO Networks, CEO Insights is an informal, monthly gathering of C-level executives. On these occasions, the leaders share knowledge and discuss trends on a wide range of topics while keeping up on the latest in human resources, legal matters, taxation, government, media, and virtually any other area of interest.

At the Otemachi Park Building, home to Mitsubishi Estate’s head office, team members from the company gave the exe­cutives a brief introduction to the history of Marunouchi, a commercial district located between Tokyo Station and the Imperial Palace in Chiyoda Ward. The name, meaning “inside the circle,” derives from its location within the palace’s outer moat.

It is also Tokyo’s financial district, and the country’s three largest banks are headquartered there. During the Edo Period (1603–1867), the area belonged to military lords. Following the Meiji Restoration in 1868, it came under the control of the national government, which erected barracks and parade grounds for the army. The land was later purchased by Mitsubishi for the development of office buildings fashioned in the style of 19th-century Western architecture. The area was later redeveloped to a modernized, concrete design and, eventually, to high-rise buildings we see today.

The first stop on the walking tour was the historic Otemachi Building. Built in 1958, it is one of the oldest in the area and is only now undergoing renovation. Several other buildings from that period have already been redeveloped, but the high-quality materials used in the construction of the Otemachi Building—along with careful maintenance—has allowed it to last longer than other buildings. In fact, it is aiming to become the first 100-year-old office building in the Marunouchi area. It also has a shrine dedicated to the goddess Otemachi Kannon, who brings prosperity and safety to those who work in the area.

With its wide 200-meter-long corridors, the building is home to Inspired.Lab, a new creative work­space designed to increase communication and collabora­tion between large companies and start­ups with cutting-edge technologies. Acting as a hub, Inspired.Lab offers business facilities, including a design thinking space, Makerspace with 3D printers as well as moulding and produc­tion equip­­ment offering the latest technologies. Tenants can use these to create prototypes and products, and have access to the free workspace and community lounge that encou­rages dialogue and idea-sharing. Private offices and hot desks, where concentrated and confi­dential work can be done, are also available.

The next stop was the famous Marunouchi Building. Walking along the spacious Nakadori Street, the executives learned about how land­owners in the area joining together to main­tain a neat, aesthetically pleasing landscape. An historic guideline among developers in the region ensures that the area’s skyline remains tidy.

The Marunouchi Building was designed to meet the original height limit of 31 meters (100 feet), and Nakadori’s 20-meter-wide sidewalks were purposefully designed following the golden ratio to make them aesthetically pleasing.

Also in the area is Tokyo Station, which is connected to the Imperial Palace by Gyoko-dori Avenue, which, in the past, was closed to the public and only used for ceremonial occasions such as the Emperor’s official travel—which is called gyoko in Japanese—or when foreign diplomats visited the Emperor to provide their accreditation.

On the 34th floor, at the top of the Marunouchi Building’s office zone, The Premier Floor features modestly sized office compartments and boasts a modern urban interior design with marble flooring and walls. Equipped with a lounge akin to that of a top-notch hotel, the floor offers prestige services, with bilingual concierges on call during office hours. Tenants include up-and-coming venture companies operating globally, as well as international companies who started their business in the Japanese market. This fully serviced, luxurious office space—complete with reception, lounge, and meeting rooms—is ideal for growing companies of all sizes looking to accelerate their reach into one of the world’s most vibrant markets.

Designed by British architect Josiah Conder, the original building—with its 19th-century, Western-style red-brick design—was completed in 1894 as one of the first Western-style office buildings in the Marunouchi district. It was demo­lished in 1968 to make way for a modern building. The building was rebuilt in 2010 and was recreated as faithfully as possible using as reference photographs believed to date from the building’s construction, blueprints, drawings, and extant structural components.

The original specifications were followed down to the last detail. For example, the red bricks used were specially ordered and produced in the exact same handmade way as in the 19th century. Even details such as the doorknobs being placed lower, because the average height of a Japanese person at the time was 15 centimeters shorter than now, have been followed to a tee.

And during a visit, you can enjoy a meal at the Café 1894, located in the hall originally occupied by the banking depart­ment featuring the original bank counter windows.

Following the tour, there was one thing on which all the CEOs could agree: their understanding of the Marunouchi area’s rich history and business appeal had been expanded.

“I was very impressed to see the vision Mitsubishi Estate has for the area near Tokyo Station,” said Wolfe. “Not only are they a building owner, but you can see they are a real estate devel­oper with vision—from the innova­tion business center type places to the vision of Tokyo itself”.

Another participant echoed those comments, saying it was inspiring to see that vision, from the water purification systems below to the beautiful office spaces above that are so conveniently located near Tokyo Station. Because of Mitsubishi Estate’s approach to development, they said that it isn’t Shinjuku or Shibuya that comes to mind when thinking of the center of the city, but rather Marunouchi.

And that’s why one CEO left the tour saying: “Our next Tokyo office should be here. Being in Marunouchi shows that your company is a serious player in the Japan market”.