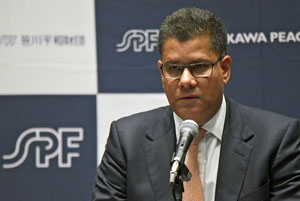 “I know some concerns have been expressed here in Japan about what might change when we leave the EU, and what the effect might be on UK–Japan co-operation.

That co-operation has been strengthening in recent years. It now covers a huge range of activity, from trade and investment, through research and innovation to security and defence. Prime Minister Theresa May is determined to strengthen our co-operation still further. Her commitment to the relationship with Japan is clear. She has already met Prime Minister Shinzo Abe twice since her appointment.

One of the most important elements of our bilateral co-operation is our defence and security partnership.

As our most recent [National Security Strategy and] Strategic Defence and Security Review states publicly, Japan is the UK’s closest security partner in Asia. We share the same objectives and co-operate in many areas—in this region, and further afield. We consider Japan a great asset to the UN Security Council and we continue to support reform that would see Japan become a permanent member.

Our security co-operation is broad ranging. We work together to frame the international response to North Korea’s continued pursuit of nuclear weapons, [and] on a new UN Security Council resolution; collaborate on counterterrorism and cyber security; and co-operate on special forces training and land mine countermeasures in the Gulf.

In the field of defence we are also working ever more closely together. Over the coming months, you will see Royal Air Force Typhoon fighter jets exercising with their Japanese counterparts here in Japan. This will be the very first joint military exercise in Japan with a country other than the US. It will be a fantastic opportunity for our air forces to work together and build the personal links, mutual trust, and understanding that help to underpin our security.

Last year, we began a range of joint capacity building projects in South-East Asia. This included running our very first joint seminar to Association of Southeast Asian Nations member states on humanitarian assistance and disaster relief, as well as working together to counter violent extremism in Indonesia.

This year, we expanded our joint work into Africa—from demining in Angola to tackling terrorism in Tunisia. We are also working together in Sri Lanka, Burma [Myanmar] and Nepal to promote the involvement of women in post-conflict reconciliation. This international co-operation is an exciting new aspect of our relationship and an area we hope will continue to grow.

There is plenty of scope to do more together in Japan, too, for example on non-combatant evacuation operations and on emergency response. In particular, we would be willing to share our experience of the London 2012 Olympic and Paralympic Games with the organisers of Tokyo 2020. 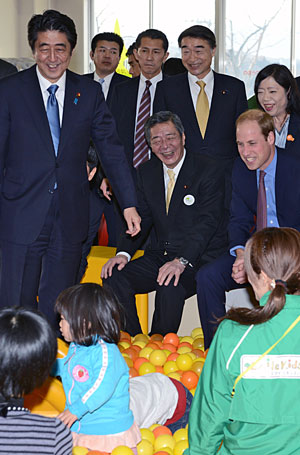 Sport
We are already sharing our experiences about the Rugby World Cup, ahead of Japan’s hosting in 2019. Last year at the World Cup in England, Japan’s Brave Blossoms stunned the world with their opening victory over a top-ranked South African team. We hope Japanese rugby will continue to grow in stature and popularity ahead of 2019.

We both recognise the serious threat it poses—to developed and developing countries alike. It is a threat that the international community must address. We welcome Japan’s leadership on the issue under their G7 presidency.

In addition to our security, as well as research and development collaboration, we are working together on commercial projects in the region. This year, these have ranged from supporting city planning in Burma and investment in Laos, to high-speed rail in Malaysia.

Culture
Cultural exchange is also an incredibly important part of our bilateral relationship. Some of you may follow the Twitter account of British Ambassador Tim Hitchens CMG LVO, where he releases a regular stream of “twaiku”—twitter haiku poems in Japanese. In return, Japan has given the UK Babymetal—who recently secured the highest ever UK chart ranking by a Japanese band.

Monarchy
The important relationship between the Royal Family and the Imperial Household is a unique aspect of the close and very special ties between our people. I’m particularly pleased that Prince William Park in Fukushima Prefecture—which Prince William visited in February 2015 as part of his tour of areas affected by the Great East Japan Earthquake—has now opened.

Education
We’re proud that the UK is increasingly a destination of choice in the field of education. Today there are around 15,000 Japanese students studying in the UK. It is only 154 years since the very first Japanese students to study in the UK defied the shogunate to travel to our shores. We hope they will be remembered next year, as Japan prepares to commemorate the 150th anniversary of the Meiji Restoration.

To me it is clear that UK–Japan co-operation is flourishing, and that there is plenty of scope for our two countries to do even more together.

I know this is an area where Japan has expressed views about the possible impact of Brexit, and I would like to share with you what I have been saying—and what all my ministerial colleagues have also been saying—to Japanese business leaders, both here and in London.

We place great importance on our trade and investment relationship with Japan. We want that relationship to remain as strong as possible. We recognise Japanese investors’ concerns and we are listening to them.

But we are also sharing with them our vision for the future and the many opportunities we see for the UK and Japan.

Most of all, I know that Britain is at heart a trading nation, with a long track record of engagement and openness and we will make Brexit a great opportunity for business and trade. Therein lies the opportunity for the UK and for Japan, as we dedicate more time and energy to exploring new areas for collaboration.

I have also been making clear our desire to become the global leader in free trade, as the prime minister set out at the G20 Summit, and assuring Japanese government and businesses that we will continue to be a strong advocate for the EU’s Economic Partnership Agreement with Japan, while we remain a member of the EU. We hope it will be concluded by the end of the year.

The UK is leaving the EU. That means change in some areas. But our co-operation in Japan covers a broad range of fields which are unaffected by the UK’s position in Europe. We value greatly this cooperation. We value greatly our special relationship. And we see opportunities to take it further, in ways that will benefit both our countries.

With energy and in great friendship and co-operation, let’s seize those opportunities together”.