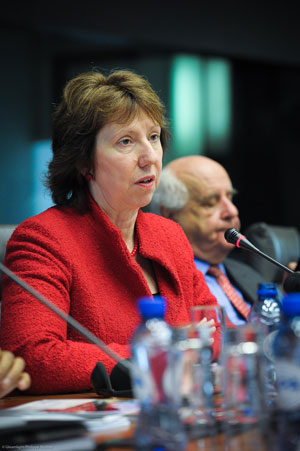 In a world that appears to be fragmenting—with nations increasingly looking inwards and acting for short-term gains rather than for the promise of long-term stability and prosperity—the international community needs to reconnect and work together, said Catherine Ashton, Baroness Ashton of Upholland, GCMG PC, in her keynote address to the UK–Japan Global Seminar 2016.

Held at the headquarters of the Nippon Foundation on 12–13 October, in conjunction with the Royal Institute of International Affairs and the Great Britain Sasakawa Foundation, the event took as its theme “Challenge and Uncertainty in a Volatile World: Japan–UK Perspectives”.

The baroness, the high representative of the European Union for foreign affairs and security policy between 2009 and 2014, and vice president of the European Commission for four years from 2010, opened her comments by stating that, “The quantity, the intensity and the complexity of the issues that are faced now in this more interconnected world are truly daunting”.

Geo-political clashes, civil wars, simmering conflicts and regional disputes mark our present world, she said, adding that nations need to become more creative to ensure that diplomacy does not go into retreat.

And that is possible, she added, pointing to her own work connected to security in the Horn of Africa, where the international community came together to combat piracy. The problem was becoming an epidemic due to the wealth that pirates were able to accrue and the appeal that had for young people in particular.

“You can address not just the challenges created through piracy at sea, but also the difficulties for these young people on the land, the prospects for their future”, she said. “And if you can work with African Union troops as they tackle [the Islamist military group] Al-Shabab and those who would cause terror in a country like Somalia, you can replace them with those who can provide education, healthcare and jobs”.

Education was at the heart of the success of the campaign against pirates in Somalia, with the slogan “Give up your guns and go to school” playing a part in reducing the number of youngsters becoming child soldiers.

But the key element, she emphasised, was multilateral collaboration between all of the people and players with a stake in a positive outcome. And that same principle needs to be applied to any number of crises that we face now. “I cannot think of an issue—from climate change, to energy needs, to development requirements, to trying to solve the conflict in Syria; from dealing with what is happening in Yemen and North Korea, to thinking about the rise of China, to what Russia might be doing in Ukraine—that does not require collaboration”, Baroness Ashton said.

“And that is especially relevant, of course, as the UK has decided in one aspect of its collaboration to think differently”, she said, alluding to the referendum on Britain’s membership of the European Union.

“And then you look at the American election and the Republican Party candidate [Donald Trump]—who is hugely popular in many parts of the country—querying the role of NATO, America’s place in the world, what the role of the United Nations should be and supporting the UK in its Brexit journey”, she pointed out.

“There are many politicians who are saying that many of the mechanisms by which we have traditionally collaborated need, at best, to be rethought or, at worst, to be undone”.

Such demands are “slogan solutions”, Ashton said, because “it’s easier to be against something than for it”, while reducing complex issues to a sound bite resonates far too easily.

Given the British public’s position on the EU, the focus must now turn to ways in which the British government, British institutions and businesses, as well as the British people can continue to interconnect with the Continent and the rest of the world.

“Whatever framework you are working in, we are going to need to be faster, smarter and better at what we do to bring collaborative processes to bear on some of the biggest problems that we face”, she said. 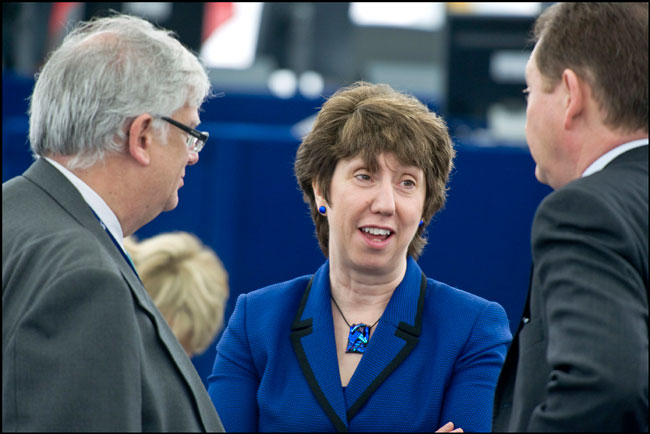 Baroness Ashton said that the need for collaborative thinking is paramount.

And Japan shares concerns over many of those same problems.

“As you in Japan think about your neighbourhood, you will see lots of opportunities for collaboration with your partners here and further afield”, Baroness Ashton said. “And you will see the challenges that you are most concerned about right now, whether that is China or what to do about the problem of North Korea”.

But given the obvious—that the world is an unpredictable place—the need for collaborative thinking is paramount, she added.

“None of us know what the future will throw up and none of us could have foreseen recent events”, she said.

“We don’t know what the future holds”, she concluded. “But what we can do is to prepare for it, and that means being flexible and smart and, above all, collaborative in our long-term thinking”.