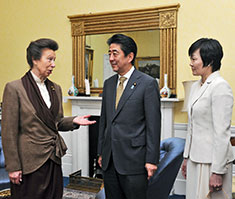 Prime Minister Shinzo Abe paid his first official visit to London at the start of May. UK Prime Minister David Cameron welcomed Abe to Downing Street, where they discussed the nations’ “dynamic strategic partnership for the 21st century”.

A joint statement was issued following the meeting, which covered several key points including defence, growth and prosperity, energy and ways to collaborate on major upcoming sport events. The following summary is drawn from the UK government’s official statement.

Defence
A mutual commitment to protecting the high seas and cyberspace was key to discussions. Both nations acknowledged the rising importance of East Asia, and how stability in the nations located in that region is crucial to global prosperity and security.

London and Tokyo recognised the right to freedom and safety of navigation, as outlined in the United Nations Convention on the Law of the Sea.

Abe described Japan’s “Proactive Contributor to Peace” policy to Cameron, who assured him the UK welcomes a more active role for Japan in international security efforts. The parties committed to negotiations on an Acquisition and Cross-Servicing Agreement, which would provide logistic, technical and administrative support to the armed forces of both countries.

A meeting in London will be scheduled in the near future with foreign service and defence ministers, to make specific proposals on developing a framework for cooperation.

In the field of defence equipment, already an industry with strong UK–Japan ties, the governments will seek to identify further projects for joint development and production. This will build on two of the defence pacts signed in July 2013.

Growth and prosperity
The UK side encouraged Japan to continue deliberations on joining the Open Government Partnership, a platform launched in 2011 to make signatory governments more open, accountable and responsive to citizens. Japan considers this an important initiative.

The nations also reinforced their commitment to promoting the establishment of rules on corporate governance.

Beef exports from the UK to Japan were discussed. London will actively participate in the European Commission’s review of the remaining restrictions on food and feed originating in Japan, with the aim of reducing trade barriers.

Regarding broader economic issues, both nations noted their goal of reaching agreement, in principle, on the key issues surrounding the signing of an EU–Japan Economic Partnership Agreement in 2015.

Both nations called for swift adoption of the new global standard concerning automatic information exchanges on tax-related matters by all financial institutions.

Each country has implementation plans to be finalised at the September meeting of Group of 20 finance ministers and central bank governors. Japan stressed the benefits of early adoption of the standard.

Cameron and Abe also announced plans for an exchange of staff between the UK Prudential Regulation Authority and Japan’s Financial Services Agency, to help spread the use of best practices on a global scale.

Energy: nuclear and renewable
In accordance with the Japan–UK Framework on Civil Nuclear Cooperation and the annual UK–Japan Nuclear Dialogue, the nations will work together regarding the ongoing decommissioning efforts at the Fukushima Dai-Ichi Nuclear Power Plant.

Both countries affirmed their support of nuclear energy as a crucial part of a low-carbon, affordable and secure energy mix.

Olympic collaboration
A special “host-to-host” memorandum of cooperation was signed during Abe’s visit, in light of several upcoming sporting events in Japan and the UK. London agreed to share insights from its experience in planning the 2012 Olympic and Paralympic Games, to support the Tokyo 2020 Olympics.

Both nations will also share best practices regarding the planning and hosting of the Rugby World Cup, to be held in England in 2015 and Japan in 2019.

Trade and Investment Minister Lord Livingston said, “I am delighted that Japan has signalled that it wants to use UK expertise to help deliver both the Tokyo Olympics and Rugby World Cup. The delivery of London 2012 on time and under budget has shown the world that the UK has a significant amount of expertise in staging large-scale events”.

Cyber-security is an area in which London has pledged support for Tokyo, in preparation for the 2020 Games and beyond. This will be regularly discussed at upcoming sessions of the UK–Japan Cyber Dialogue.

In addition, English-language teaching is in focus as the 2020 Games approach. The UK will continue working closely with Japan on this front, partly through the provision of globally validated assessments such as the IELTS (International English Language Testing System).