In scenes described as reminiscent of a One Direction concert, Prince William, The Duke of Cambridge, was politely mobbed by local residents of Onagawa, Miyagi Prefecture, during a visit to areas hardest hit by the March 2011 Great East Japan Earthquake.

The prince described his trip to Tohoku—co-organised by the British Chamber of Commerce in Japan—as the most important part of his four-day state visit to Japan, said Jamie El-Banna, founder of It’s Not Just Mud, who spoke with him for several minutes.

“All the people had lined up well in advance of his arrival and it was all very organised”, said El-Banna, who set up the non-profit organisation after arriving in Tohoku to volunteer in the summer of 2011. 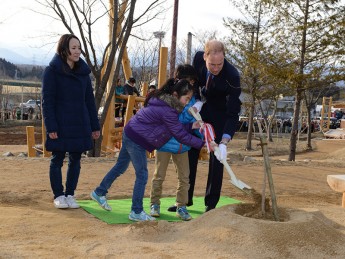 “But as soon as Prince William had rung the bell of hope at the Onagawa shopping centre, everyone was pushing forward to shake his hand and say a word or two.

“It really was most un-Japanese”, he added. “It was like a One Direction concert with royalty”.

As well as ringing the bell, which was recovered from the mud in the aftermath of the tsunami, the prince admired lion dance performances, including one by children.

“I guess I spoke to him for three or four minutes”, said El-Banna. “He asked me my story and about the work we have been doing for the last three-and-a-half years. When I told him how important it was to local people that he had actually come to Tohoku to see them, he shrugged it off.

“And that importance goes for Fukushima as well”, El-Banna added.

“When people are steering clear of the area, including Japanese people, his visit came as a huge boost to them. There was a real sense that, if it was safe for the future king of England to come here, then it should be safe enough for anyone”.

El-Banna said the prince told him that the visit to Tohoku was something he had insisted upon.

On the same day, the prince met Shinichi and Ryoko Endo, a couple from Ishinomaki City, also in Miyagi Prefecture, who had lost their children in the disaster. He expressed his sorrow, adding that he could understand their feelings as he had also lost a loved one.

The couple gave him some decorations carved from wooden debris washed up by the tsunami.

The prince later laid a bouquet of flowers beneath a torii gateway to the Shinto shrine atop the hill that looks out across the waterfront district of the city that was devastated. A group of children presented him with folded-paper cranes, symbolising hope for the future.

In reply, he said arigato and told them that he would take the gifts home as a souvenir for 1-year-old Prince George, who remained in England with his mother Catherine, The Duchess of Cambridge.

In the capital
The prince was welcomed to Tokyo by Governor Yoichi Masuzoe on 26 February.

The occasion marked the prince’s first visit to Japan—a destination his father, Prince Charles, most recently visited in 2008 and which his late mother, Princess Diana, toured in 1995.

Masuzoe then escorted him on a boat ride from Tokyo International Airport Haneda to Hamarikyu Gardens, where he enjoyed traditionally prepared green tea.

The governor pointed out a number of locations along the waterfront that will be developed as venues for the 2020 Tokyo Olympic and Paralympic Games, with the prince commenting that he is certain that the entire event will be a success.

The following day, the prince visited the Commonwealth War Cemetery in Yokohama and laid a wreath at a memorial to over 1,700 servicemen from Commonwealth counties who died as prisoners of war in Japan during World War II.

The hand-written note on the wreath read, “May we never forget all those who paid the ultimate sacrifice for our freedom”.

After lunch with Emperor Akihito and Empress Michiko at the Imperial Palace in Tokyo, the prince went on to open the Innovation is GREAT campaign. This year-long initiative will showcase cutting-edge British technology in the fields of robotics, healthcare, big data and space (see page 18).

“In just 24 hours so far in Japan, I have had a chance to experience the blend of ancient and modern which so characterises this amazing country”, the prince said.

“I can barely think of another country on Earth which pays so much reverence to its ancient customs whilst also being so outwardly modern”.

Pointing out that the UK shares a similar respect for the ancient and modern, the prince said the two nations have many other things in common, as well as links that go back to 1600, when the first Briton, William Adams—known in Japanese as Miura Anjin—set foot on the island of Kyushu.

The prince identified the transfer of British technology to Japan in centuries past and the more recent collaborative relationship that exists today as being critical to the bilateral relationship.

“It is in that spirit of collaboration and a shared history that I am proud to open the Innovation is GREAT campaign here in Tokyo”, he concluded.

The Duke of Cambridge makes his first visit to Japan.