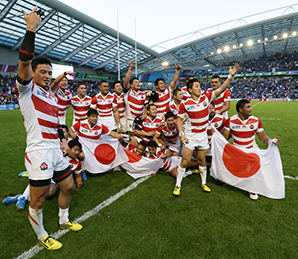 Japan celebrates a win over South Africa at Brighton Community Stadium in 2015.

When the Rugby World Cup 2019 kicks off, Shizuoka Prefecture will play host to four matches, two of which will feature teams from the UK, Scotland and Ireland which represents the island of Ireland including Northern Ireland. British Ambassador to Japan Paul Madden CMG and Shizuoka Prefecture Governor Heita Kawakatsu touched on rugby and the connections between the prefecture and the UK in a wide-ranging October interview moderated by the Mainichi Shimbun.

Ambassador Madden, how did you get involved with Japan and what is your impression of Shizuoka Prefecture?

In 1982, I took part in an essay contest organised by the Ministry of Foreign Affairs of Japan. The prize was a two-week study tour of Japan, so I came here and travelled all over. I felt that Japan was a very exciting place that I wanted to be more associated with.

At the time, I was working in the Trade Ministry. I persuaded them to transfer me to the Foreign Office, send me to London University to learn Japanese, and then post me to Japan. Living in Japan from 1988 to 1992, I spent the first year in Kamakura, where the British Embassy Tokyo ran a language school. Every morning, as I went to school, I could see the beauty of Mt. Fuji across the bay. It was my first sighting of Shizuoka.

Sir Rutherford Alcock, the first British diplomat here, in 1868 became the first non-Japanese to climb Mt. Fuji. This gave me another connection with Shizuoka. And then looking ahead, we have both the Rugby World Cup in 2019 and the Olympics and Paralympics in 2020, when we’ll see a number of British athletes competing in Shizuoka.

Governor Kawakatsu, what can we expect from the Rugby World Cup 2019?

At the Rugby World Cup 2015 in London, the Japanese captain was Michael Leitch. His father is a New Zealander and his mother Fijian. He came to Japan when he was a high school student and loved the country—so he became a Japanese citizen. Sport can do a lot to make such things possible, to allow anybody to make their dreams a reality.

This is a time when we open Japan to everyone. Even if their mothers or fathers are not Japanese, they are all applauded. So, 2019 and 2020 should be important occasions when we become multicultural through sport and all people are treated equally.

This is the kind of society we are trying to create with our friends from around the globe. It is, I believe, one of the United Nations’ goals, as well. So this is not a single event—rugby, or the Olympics, or the Paralympics—but the starting point, or a pivot, from which Japan can change.

Shizuoka is a small prefecture—only 3.7 million people—but quite an important region. For instance, Sakichi Toyoda, founder of Toyota Motor Corporation, was born in Shizuoka. Soichiro Honda, who founded Honda Motor Co., Ltd., was also born here. And we have beautiful nature which, like a gallery of seascapes and mountainscapes, is itself art.

Fukuroi City’s ECOPA, one of our stadiums, was chosen for the Rugby World Cup 2019, thereby placing Shizuoka on the world stage. There will be four matches, the first of which will pitch Japan against Ireland.

In addition to looking forward to watching the match, the Japanese are beginning to understand that the UK and Ireland are separate countries, albeit English is spoken in both. This realisation is special, since it is in ways such as this that the Japanese are opening their eyes to the world.

Ambassador Madden: I believe cultural exchanges are really important, and the thing to remember when you’re hosting a major world event such as the Olympics and Paralympics is that, for a period of time, you become the focus of the world’s media.

There are so many journalists who attend events and—although princi­pally there to cover the sport—can’t avoid also writing stories and making films about other aspects of the country. So, it’s a really good opportunity for a nation to showcase what it can do.

Many people remember the London 2012 Olympic and Paralympic Games opening ceremony. But we also had a major cultural festival featuring many aspects of the creative arts and industries.

In fact, we are going to be holding “Seasons of Culture”, a cultural festival here in Japan to showcase UK arts, as well as collaboration with Japan. It will run from the Rugby World Cup in 2019 until the end of the Olympic and Paralympic Games. And it will, of course, have some big blockbuster elements, reflecting the long tradition of top British performing arts, music, dance and visual arts, as well as the exchanges between our great museums.

Parallel with this, Japan is going to be hosting a cultural festival in the UK. And London’s recently opened Japan House—an initiative of Prime Minister Shinzo Abe—will also play a part.

Ambassador Madden: In addition to the “blockbuster shows”, the events will focus on the three themes of inclusion, open space and digital. We will aim to engage all around Japan. I think the thing that is interesting about the Rugby World Cup, by comparison with the Olympics and Paralympics, is that the Rugby World Cup is spread right across the country: twelve cities from Hokkaido to Kyushu.

Whenever I have travelled around Japan and visited places that are to host events, the people have been very excited. I remember calling on Kumamoto Mayor Kazufumi Onishi, who was telling me how they are very keen to get the central six-storey keep of Kumamoto Castle restored, following the damage caused by the major 2016 earthquake. It is hoped that restoration will be completed by the start of the matches, because the castle is a symbol of their city.

I think that we are going to have many British fans coming to watch games; probably more than 40,000. I have four teams to support. Besides the England, Scotland and Wales teams, there will be the Ireland team, representing the whole of Ireland—both the Republic of Ireland and Northern Ireland, which is part of the UK.

Two of the teams, Scotland and Ireland, will be playing in Shizuoka. I think that, for Shizuoka, it is going to be the most wonderful opportunity for free advertising. All around the world people are going to see beautiful Shizuoka Prefecture. I am confident it is going to be great for your tourism. 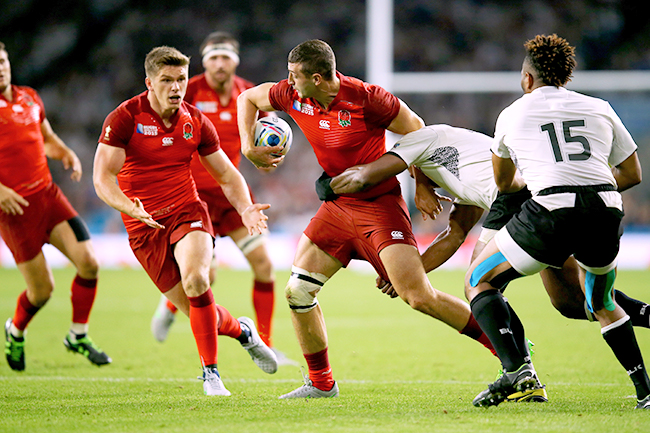