Sixty-five years of diversity, charity and business make the BCCJ better than ever

In the early months of 1948 a handful of British businessmen—early post-war pioneers—met in Tokyo to discuss ways in which they might help each other take advantage of the clear business opportunities that peace and the Occupation afforded.

Among them were the late William Salter and the late Douglas Kenrick, two men who essentially spawned the idea of creating a British chamber of commerce here.

Towards the start of my executive directorship, I learned about the BCCJ’s beginnings chiefly from Kenrick. 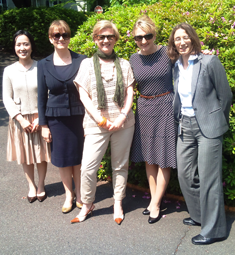 Today there are five female members of the Executive Committee.

Though founded in 1948, it wasn’t until 1955 that the then Ministry of Trade and Industry permitted the use of the name British Chamber of Commerce in Japan. This granted the organisation Foreign Juridical Person status under Article 36 of the Civil Code.

The Treaty of Commerce, Establishment and Navigation between Japan and the UK ratified that status in 1963. Only then did the chamber set up a permanent secretariat.

Sadly, much of the chamber’s archive was lost during a move, so we can only speculate about the sorts of issues that prevailed at the time.

It would be fascinating to know, for example, what the BCCJ’s position was with regard to the 1964 Olympics, which was a catalyst for the rapid development of the capital.

A similar effect is expected as a result of Tokyo having won its bid to host the 2020 Olympic and Paralympic Games, which should generate renewed investment and growth in the nation.

The British Embassy Tokyo’s former Commercial Counsellor Ben Thorne recalls: “In 1968 I was posted from the British Trade Commissioner’s Office in Hong Kong to the embassy in Tokyo as director of the newly conceived Office of the British Week in Tokyo, which was to be held the following year. That was my first contact with the BCCJ.

“Among the key members at the time were trading houses I recognised from Hong Kong, such as Jardines, Butterworth and Swire, Dodwells and so on, all of which made me feel very welcome”.

The British Week was considered a success, and the BCCJ featured prominently in the outcome of the event. But shortly afterwards, the Japanese prime minister commented that British business was not trying hard enough in the Japanese market.

The British Marketing Centre (BMC) was set up in Aoyama-itchome as a result.

Thorne was appointed director, concurrently serving under Ambassador Sir Fred Warner as commercial counsellor, in which capacity he was co-opted onto the chamber’s executive committee.

Also working at the BMC was Mrs Kazuko Kon, who spent her entire career with the British Embassy Tokyo.

“The BCCJ and the Commercial Section of the embassy were always extremely close. The British Market Council was also a key partner. I have happy memories of our collaboration on such things as the Opportunity Japan, Priority Japan and Action Japan campaigns that ran through the ’90s”, Kon said.

Martin Barrow, who for many years headed Jardines in Japan, was president of the chamber from 1979 to 1980 and he, too, remembers the close connection with the embassy.

“Of course we had very good connections. But at the time we had few links with the relevant people in the Japanese government—with MITI, the Gaimusho [Ministry of Foreign Affairs], the Ministry of Finance and so on. So we set out to build those links, as at the time there remained several barriers to trade and investment that we needed to bring to their attention”, Barrow said.

1980s: pivotal years
Through the 1980s, the chamber went from strength to strength, with important figures such as Ray Giles, then of Beecham Group plc, playing a key role in creating what would eventually become today’s European Business Council.

The year 1987 was particularly significant. The BCCJ Executive Committee made the decision to hire an executive director with a media and communications background.

At the same time, thanks to the generosity of Robin Maynard, then of Sedgwick & Co Ltd, the chamber office was moved to a central location with improved office space and a large meeting room at its disposal.

“My enthusiastic support for the BCCJ was based on what is known in the treaty reinsurance business as a reciprocal trade. Particularly during my extended spell as the Lloyd’s of London general representative in Japan, speakers at chamber events delivered helpful new business concepts and direction sourced from outside the financial services sector. My reciprocity was to have successive Lloyd’s chairmen, who were no longer simply selected from the insurance and reinsurance market, lift the shrouds on the workings of the city”, Maynard said.

In 1987, the chamber’s current operations manager, Sanae Samata, joined the BCCJ. She recalls that, “There was no PC, so our executive director brought in his own machine from home so I could work on an internally produced directory of members”.

By far the longest-serving employee, Samata is certain about the chamber’s greatest strength: the generosity of members.

“I think the volunteer spirit of our members, especially the contribution by the Executive Committee, is incredible. I have learnt such a lot from their attitude to service in the community”.

1990s: expansion and the BIC
The 1990s were years of great expansion. The chamber produced a number of publications such as Japan Posting, Research and Development in Japan, Seihinka, and Gaijin Scientist.

These were the result of initiatives such as the Science and Technology Action Group and the Small and Medium Business Initiative.

The London Club, later renamed the UK Kai, was formed to involve more Japanese members. Sukeyoshi Yamamoto of NSK Ltd. was the first Japanese to be asked to join the Executive Committee.

“I thought about my contribution and decided to prepare a monthly economic report from the perspective of the manufacturing sector. These are on-going, even though I have now stepped down from the committee”, Yamamoto said.

A significant development came with the establishment in 1997 of the British Industry Centre (BIC) in Yokohama. This initiative was designed to encourage British firms to set up and do business in Japan, by helping reduce set-up costs and potential difficulties.

The BIC was the result of collaboration among the BCCJ, the City of Yokohama and Nomura Real Estate, with the support of the British government and the British Embassy Tokyo.

It was formally opened in January 1998 by then Prime Minister Tony Blair. Mike Ingle, formerly with Sedgwick in Tokyo, was appointed to promote and market the idea.

“Initially, the centre had bilingual staff on hand to assist tenants. We could even answer telephones on their behalf. We set up in the prestigious Yokohama Business Park. Rents were heavily subsidised, there were grants to be had from the City of Yokohama and, of course, the BCCJ was there to support. The BIC attracted a huge amount of attention; other countries wondered if they might emulate it. It was without doubt a huge success”, Ingle said.

2000s: first female president
As with Yamamoto becoming the first Japanese member of the BCCJ Executive Committee, the time at last came for the BCCJ to elect a woman as president. In 2004, Alison Pockett, then of Magellan Financial Planning K.K. was that woman.

“I was very proud, but I was particularly conscious of meeting the expectations of so many different organisations so closely connected with the chamber; not because I was a woman, but because I ran my own small firm as opposed to being the head of a large British corporation”, Pockett said.

Now, the chamber is once again headed by a woman, Alison Jambert. We can be proud of the fact that the BCCJ is more active and involved today than it ever has been before.