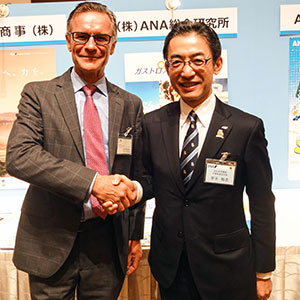 Although Japan’s major cities of Tokyo, Kyoto and Osaka are the entry point to the country for most tourists, a whole other world awaits the more intrepid traveller. Guiding visitors through the most historic and scenic spots is pioneer walking tour operator Walk Japan Limited, which this year celebrates its 25th anniversary.

Founded by the two academics Dick Irving and Tom Stanley, the firm got its start after they began taking students from the University of Hong Kong on study trips to Japan. Word soon spread and others asked if they could join.

But the firm’s origins run even further back, to when Irving, according to an apocryphal story, discovered an old map of the Nakasendo Way at Kyoto University while he was a research student there. With the document in hand, he set out to explore the historic route between Kyoto and Tokyo, laying the foundations for the student trips and, subsequently, Walk Japan’s signature Nakasendo Way tour.

Today, Walk Japan runs well over 300 tours from its roster of 23 different itineraries, both guided and self-guided, covering many regions of Japan between Hokkaido and Okinawa. It also provides tours for major travel firms based in the UK and United States, and has a strong presence in the school tours’ sector.

A path beyond
Underpinning that growth has been a commitment to constant improvement, with Walk Japan adapting the tours over time to reflect changes in the localities they cover, as well as the tastes and needs of their customers. In the words of Paul Christie, the firm’s chief executive officer, the tours are “living entities and need constant TLC”.

Since guides are a vital part of any tour experience, Walk Japan strives to provide the best possible. Prospective candidates are required to undergo a training programme, regardless of prior experience, to become one of the firm’s tour leaders. They come from a wide range of backgrounds including the media, agriculture, finance and education. The company also counts ex-salarymen and women, a shugenja monk, and the scion of a Mount Fuji guiding family among them.

Christie cites Walk Japan’s culture—a meld of Japanese and Western work styles—as being one key to its success. This combination helps the firm serve their customers—who primarily come from Western nations—with authenticity and Japanese levels of service.

“We are acutely aware of what makes a very enjoyable time for our customers in Japan. That has come from knowing well the Westerners’ interests and expectations, combined with our deep knowledge of Japan”.

Walk Japan makes a significant contribution to local economies with its tours. But more than that, through its Community Project, it is helping to revive a village in Kunisaki, Oita Prefecture. The project includes farming and restoring old buildings. Importantly, 25 members of its staff work there, making it a major local employer. On tours to the area, customers visit the Community Project.

“Everything we’re doing in this immediate locality is setting an example of what’s possible in rural Japan”, said Christie.
Taken together, these things mean that Walk Japan offers a truly multidimensional experience—something that other travel firms would find difficult to match.

These achievements have been acknowledged by municipalities and the central government, as well as some of Japan’s leading firms. Last year, Christie was chosen by the government to be a Cool Japan Ambassador, and in September this year he was appointed an ANA Ambassador by All Nippon Airways Co., Ltd. to advise on inbound tourism and the revival of the countryside.

Just the start
Walk Japan’s business was growing comfortably until 2010 and, positioned well to capitalise on the recent surge in Japan’s inbound tourism, it has developed at an even greater pace since then. As the nature of inbound tourism changes with more visitors pursuing trips beyond the big cities, in smaller groups or as independent travellers, Walk Japan looks set to benefit further, given its ability to show a more intimate side of the country.

Growth has also been driven by word of mouth among members of Japan’s expat community. Many have joined Walk Japan’s tours, some after winning prizes sponsored by the firm at the British Chamber of Commerce in Japan’s British Business Awards. Previous winners have included former British Ambassador to Japan Tim Hitchens CMG LVO and his wife Sara, who subsequently went on to join other tours with the firm.

“I like the notion of great oaks growing from little acorns”, said Christie. “As a firm, we’re still only at the beginning of what’s possible”.