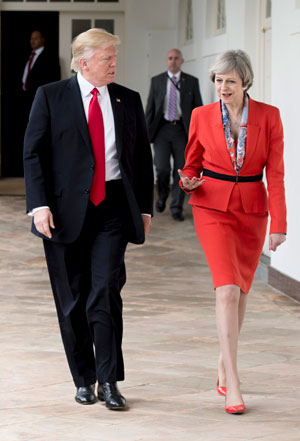 Prime Minister Theresa May met with US President Donald Trump in January.

Prime Minister Shinzo Abe appears to have earned brownie points following his recent trip to the United States for talks with President Donald Trump. Ahead of the visit, there was much scepticism in the Japanese media about the possible outcome, but afterwards a Kyodo news poll showed that 70% of Japanese people were satisfied with the results of the talks, and Abe’s personal approval ratings rose to around 62%, up slightly from a month earlier.

One of the most important issues for Japan is defence. Trump promised that the United States was “committed to the security of Japan and all areas under its administrative control”. This was seen as a reference to the American guarantee to defend Japan in any confrontation with China over the disputed Senkaku Islands—known in China as the Diaoyu—in the East China Sea.

The two leaders delegated responsibility for this dialogue to Vice-President Mike Pence and Deputy Prime Minister Taro Aso (who is also minister of finance). Pence was a supporter of the Trans-Pacific Partnership, a major trade deal strongly championed by Abe. But in one of his earliest acts as president, Trump pulled out.

No date has yet been set for Pence to visit Japan and for talks to begin.

A different reaction
Meanwhile, in the UK there is furious debate over another proposed visit. When Prime Minister Theresa May visited Washington in January, she invited Trump to pay a state visit to the UK. Many MPs feel this was premature and are calling for the invitation to be cancelled.

A state visit, they argue, is a rare privilege that, since the 1950s, has only been given to two other US presidents—George W Bush and Barack Obama—who were well into their terms in office. An online petition against a Trump state visit gathered more than 1.8 million signatures saying a formal visit “would cause embarrassment to her majesty the queen”.

State visits differ from official visits, as they see foreign guests welcomed with royal pomp and military ceremony. Most stay at Buckingham Palace as guests of the queen, and one opposition MP, Paul Flynn, said a state visit would make it appear as if the queen were “approving the acts of Donald J Trump”. He said that the president had displayed an “Orwellian” disregard for the truth and behaved “like a petulant child”.

No date has yet been set for the proposed visit, which is supported by an opposing petition that garnered 300,000 signatures. Speaking in favour of the visit, the Conservative Party politician Jacob Rees-Mogg questioned whether Flynn had complained on the occasion of Emperor Hirohito’s state visit in 1971.

The invitation to Trump has proved to be highly controversial, especially following his executive order barring citizens of seven majority-Muslim countries from entering the US. There have been protests and demonstrations in several UK towns and cities, and London Mayor Sadiq Khan has urged the government to reconsider. Even John Bercow, the House of Commons speaker, has come out against the invitation, although by convention, the role is politically neutral. He has said that Trump should not be invited to address parliament.

The British government, however, insists that the visit will go ahead later this year.