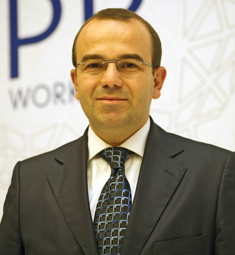 Halil Gunay is general manager of Turkish Airlines in Tokyo.

This city needs an airport that runs 24 hours. Then maybe prices would go down. It would not only help the airlines but the Japanese economy and the Ministry of Land, Infrastructure, Transport and Tourism; many things would be affected positively”.

Halil Gunay, general manager of Turkish Airlines in Tokyo, believes airports in Japan need to consider operating on a 24-hour basis in order for the country to be competitive on a global scale.

Gunay’s firm has been chosen as the “Best Airline in Europe” for the third year running by Skytrax World Airline Awards. The operator also won Skytrax’s 2013 title for “Best Airline in Southern Europe” and has been awarded “Best Business Class Catering”.

Many changes are in store for the airline industry with the announcement of Tokyo as the host city for the 2020 Olympic and Paralympic Games, including a potential extension of airport hours.

The Japanese government has also discussed expanding the departure and landing slots at both Narita and Haneda airports by 70,000 in the run up to the Games.

Turkish Airlines has plans to increase the frequency of its Narita flights to two a day, starting from 4 November.

“We saw great potential not only from Japanese consumers, but also due to increased demand from inbound foreign travellers”, Gunay said.

“Hosting the Olympics will force Japanese airports to further develop to accommodate international flights. For now, the flight times are limited and it is difficult to get slots at the times we want”, he said.

Turkish Airlines is planning to launch regular flights from Haneda and other Japanese cities in the near future, but it is first hoping for some regulatory and other changes to make things easier.

Partners in quality
Earning the Skytrax award and other accolades has been achieved in part through exclusive partnerships with high-profile brands and individuals.

The operator had consistently been recognised as a top provider in the Business Class category.

In August, Turkish Airlines announced the introduction of new luxury amenity kits made by Porsche Design, a firm whose founder can also be credited with the concept for the original sports car of the same name. The amenity kits contain products made by premium Italian skincare brand Acca Kappa.

The focus of the design, Porsche’s first collaboration with an airline, was on functionality and premium quality.

During the design phase special attention was given to post-flight use; the hard-shelled container now in use can provide storage for computer and mobile phone accessories or toiletries.

Until June, Turkish Airlines was also associated with sport clubs that are well known across the world such as Manchester United and FC Barcelona. Brand recognition increased dramatically with these two partnerships, according to the firm.

This May, Turkish Airlines announced an agreement with Borussia Dortmund (BVB), past champions of German football’s top league, Bundesliga.

“Our headquarters saw big potential with BVB as they played in the final of the Champions League last year, and the team agreed on the sponsorship”, Gunay said. The airline will carry the team to international matches and use players in their promotional material as part of the deal.

However, Gunay feels sponsorship must go deeper than a simple financial or barter transaction.

“We need to understand why we need to use sponsorship. Nobody wants to spend millions of dollars on marketing if you have nothing to back it up; you need to have the potential to make the most of it”, he said.

Local talent for the local market
Saori Kimura, a Japanese volleyball star who rose to fame for her performance in the London Olympics, recently moved to Turkey to join the VakifBank TT team. Since then, Turkish Airlines has initiated a partnership with the athlete.

“In Japan, sometimes international players are not well recognised, so we chose a Japanese player who was widely known in her home country”, Gunay explained.

Kimura’s appearance in ads has so far had a positive impact on the airline’s business in Japan. It seems the sky is truly the limit for this ambitious, growing brand.