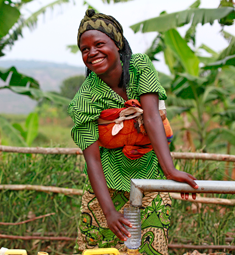 In October 1887, British engineer Henry Spencer Palmer completed work on the first modern waterworks system in Japan. It brought clean drinking water to the 87 households that made up Yokohama. In addition, it laid the groundwork for the coastal village to grow into the thriving modern city that it is today.


The Yokohama Waterworks Bureau last year marked the 125th anniversary of the occasion with a ceremony attended by representatives of the British Embassy Tokyo and the mayor of Yokohama. Also present was Kaoru Takahashi, the Japan representative of British aid organisation WaterAid, which is bringing the water wheel full circle.

“We only opened our [Japan] office last August and were registered as a legal entity in February. But we have already made progress and have high hopes for our organisation here”, Takahashi told BCCJ ACUMEN.

“In terms of bilateral aid, the Japanese government is still the largest donor in the world for the water and sanitation sector”, she explained. “We believe it will be helpful if WaterAid can provide information about poor communities of the developing countries in which we work, so that Japan remains a major contributor to water and sanitation projects”.

Set up in the UK in July 1981, WaterAid is today one of the world’s most respected non-profit organisations dedicated to dealing with water, sanitation and hygiene issues. 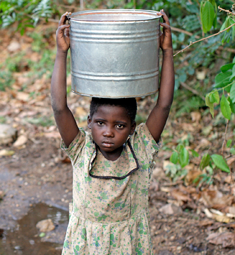 A lack of safe water close to home affects women and children’s ability to work and be educated.

The organisation currently operates in 27 countries—primarily in Africa and southern Asia—to combat the problem of communities that do not have access to arguably the most fundamental requirements of human life.

According to the United Nations (UN), 783mn people—about one in 10 of the world’s population—don’t have access to safe water supplies. In addition, close to two-fifths of the planet’s inhabitants (2.5bn people) do not have access to adequate sanitation.

Every year, about 700,000 children die as a result of diarrhoea caused by unsafe water and poor sanitation. Incredibly, diseases caused by dirty water and inadequate sanitation kill more children every year than AIDS, malaria and measles combined.

A lack of safe water close to their homes also forces women and children in developing states to devote time to collecting water. This affects their ability to both work and be educated.

“WaterAid is doing two things in parallel”, said 36-year-old Takahashi, who in 2004 completed a master’s degree at The School of Oriental and African Studies, the University of London.

“Our mission is to transform the lives of poor people through access to safe water and sanitation”, she explained. “To make our work effective, we work with local organisations to ensure sustainability”.

WaterAid invests in local organisa-tions to help them construct wells and boreholes, depending on local needs and the geographical situation. In addition, it helps develop alternative systems to harvest rainfall, and invests in helping local community groups by providing basic latrines and improving hygiene practices, such as hand washing.

“At the same time, we explain to decision makers around the world the importance of clean water to health, education, economic growth and gender equality.

“Some national leaders prefer to focus solely on economic growth for their countries, but we believe that access to water is a basic human right that will inevitably lead to better economic growth”, she said.

The issue is considered to be so critical that water and sanitation were added to the UN’s eight Millennium Development Goals, to be achieved by 2015. 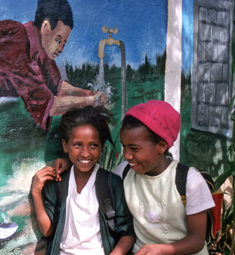 WaterAid educates communities about the importance of good hygiene.

According to the UN, there has been demonstrable progress, the number of people with access to better sources of water having climbed to 6.1bn in 2010—up more than 2bn people from the 1990 figure.

According to WaterAid, great strides have been made in China and India, although much still remains to be done in African countries.

Since the WaterAid office opened in Tokyo, Takahashi has held a series of meetings with representatives of the Ministry of Foreign Affairs of Japan and the Japan International Cooperation Agency to underline the importance of continued government assistance in this area.

At the fifth Tokyo International Conference on African Development—held in Yokohama over three days in early June—Takahashi organised a seminar at which a spokesman for WaterAid in Africa detailed just how important access to clean water, sanitation and hygiene are to one’s community.

Takahashi is also meeting with a number of corporations, both Japanese and international, to link their corporate social responsibility efforts to the water and sanitation issue. The responses to date, she said, have been very positive.

Once WaterAid is established in Japan, Takahashi plans to reach out to the Japanese public and to promote awareness of the issue that millions of people face on a daily basis.

“At the moment, not enough people in Japan know about WaterAid or the problems that so many people have in simply getting clean water”, she said. “Getting that across to the public and raising interest in the issue is the next step”.

To donate:
(By bank transfer)