Getting the message across in a crisis

Unfortunately, for many management consultants and change specialists, the word “crisis”, in either Chinese or Japanese, does not translate into “danger and opportunity”. But perhaps a better translation from the English—and a more accurate definition—is a dangerous moment when one’s full attention is needed.

This certainly chimes more closely with the Greek word, krisis, from which the English word is derived. Krisis means a turning point requiring judgement and sound decisions.

But how does one assess the kind of leadership needed during a crisis? 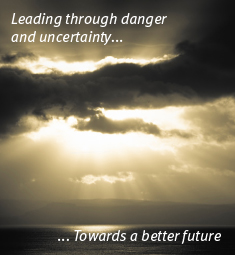 Having defined crisis, one next would do well to define leadership. While there are probably as many definitions of leadership as there are books on the subject, fortunately one author, John Adair, has given us the insight that, rather than try to define leadership, it is more useful to ask: what do leaders do? Or, put slightly differently, what does someone need to do to be seen as a leader?

Having thought about this for many years, my current hypothesis is that leaders need to achieve, and continuously display, four meta-behaviours—activities that integrate, adapt and coordinate other behaviours. They thus need to:

1) Communicate the future state of things towards which we are all moving, that is, the vision.
2) Show how we are going to get there (strategy) and help navigate the choppy waters of reality to ensure the whole enterprise stays on course (by making the right decisions at the right time, and communicating these in real time).
3) Ensure that those who are following want to go there (by being fully and personally engaged in the enterprise).
4) Give the followers the tools and resources they need to become entrusted and empowered.

The behaviours leaders tend to demonstrate during a crisis most closely resemble those of the second behavioural area: making the right decisions and communicating them in real time.

However, if my hypothesis is correct, a leader ignores the other three behavioural areas at their peril. This suggests that, during a time of crisis, a leader still must keep people focused on the “better future” towards which we are all working, as well as ensure that people are fully engaged and entrusted.

The “fire fighting” leader who loves to take charge of everything at times of operational necessity might find this hard, but so would the visionary leader who is less strong on day-to-day operational reality.

The leader who succeeds over the long term knows that they have to “flex” into other behaviours that may come less easily to them.

Put simply, the crisis leader must simultaneously recognise—and communicate—the seriousness of the situation and why action is required, as well as paint a picture of the long-term and better future that lies ahead. Only in this way is it possible to both engage and entrust others.

Many excellent examples of this crisis-leadership approach succeeding can be found throughout political and business history. Thus, for example, John F. Kennedy evoked the fear and the threat of the Soviet empire to inspire the American people to want to go to the moon. Rudy Giuliani showed incredible real-time focus on the morning of 11 September 2001, setting up a succession of communication centres, each a replacement as the previous centre became inoperable. Yet, from the start, he never forgot to focus on the strength and the solidarity of the people and the hope, optimism and better times to come.

In a canonical example from the business world, James Burke, CEO of Johnson & Johnson, led the firm through the Tylenol crisis in the 1980s. The immediate recall and plant shut-downs, coupled with open and detailed communication, showed that the firm’s first priority was protecting customers. But Burke also asked: “how do we save the product?” He saved both the brand and the broader reputation of the firm.