Now in its 27th year, the Japan Exchange and Teaching (JET) Programme has welcomed more than 55,000 people from 62 countries to deliver grassroots international exchange between Japan and other nations. Eleventh in our series, this column features former JETs, both in the UK and Japan, who keep the idea of fostering mutual understanding firmly at heart. 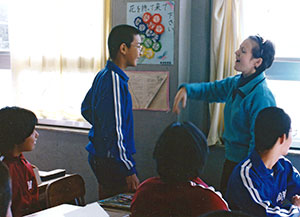 Joan Dixon’s main role was to interact with children living in rural areas.

In 1989, I became one of the first participants in the Japan Exchange and Teaching (JET) Programme. A country girl at heart, I was blessed to be placed in the small city of Ena in Gifu Prefecture.

My main role was to give children in rural areas experience of meeting a native English speaker. I visited schools located high in the mountains, from agricultural based colleges to traditional high schools. Every day was different and a challenge, but I will never forget the fun that I had teaching—and learning—with the students.

I thought Japanese people would be reserved, in a similar way to British people, but the kindness shown to me by people who didn’t know me was extraordinary. While on a street, I was, at different times, invited to a sake brewery, a pottery studio and to take part in a local festival. An old couple on a train insisted that I try one of their goheimochi (non-glutinous rice skewered and grilled with miso paste), a local delicacy. Bags of apples, persimmon and cabbage were left anonymously in my genkan (entrance hall). The baker saved my favourite cheese bread for me to collect every Friday.

The hospitality I was shown taught me a lot. Although I couldn’t speak much Japanese, I learned that a smile, a bow and a thank you go a long way.

On returning to the UK, I undertook post-graduate study, which culminated in the completion of my PhD. Today I work for a leading industry-based lobbying group, campaigning for the economic, social and environmental regeneration of former industrial communities.

In addition, I am a county councillor in Derbyshire. Derbyshire County and City Councils are twinned with Toyota City in Aichi Prefecture, due to the location of Toyota Motor Corporation’s manufacturing plant in the area, in Burnaston. Due to this connection, I have had many opportunities to reciprocate the welcome I received in Japan.

It was my pleasure to greet Toshihiko Ota, mayor of Toyota City, and work with him. We have hosted staff from his secretariat, who have helped develop even closer links. For example, a tourism website for Derbyshire was developed that specifically caters for Japanese travellers. The website was launched at the Toyota Festa—a big, local trade fair—and two of the county’s staff were present to promote tourism exchange between the two areas.

I have also had the chance to reconnect with JET alumni, and have participated in alumni events, particularly those promoting closer trade links between the East Midlands and Japan. Based on my experience, it would be good to get more UK firms to recruit former participants of the JET Programme due to their distinctive understanding of Japan and its people’s way of doing business.

One of my most pleasurable experiences is my return to Japan with my husband, who had not previously visited. Having studied Japanese before I departed the UK, I was able to talk much more easily, which was a real boost. As well as visiting sights in Tokyo, Kyoto and Nagoya, we made a special effort to return to Ena, where the flat that was my home still overlooks the town.

Rudyard Kipling once wrote: “And what should they know of England who only England know?” Living in Japan certainly helped me understand both Japanese culture and my own culture better. Working in Japan has taught me, in my professional life, the value of firstly building relationships with people and earning their trust. It has also taught me to appreciate Japanese culture; I am always stocked with meishi (business cards) and omiyage (souvenirs) when we have visitors at the office. Of course, like many Japanese meishi, mine are bilingual.

It is unfortunate that I cannot return to Japan as a JET Programme participant as the limit is 40 years of age. Older and wiser, I think I would enjoy time in Japan even more now.