Now in its 29th year, the Japan Exchange and Teaching (JET) Programme has welcomed more than 55,000 people from 62 countries to deliver grassroots international exchange between Japan and other nations. This column features former JET Programme participants who keep the idea of fostering mutual understanding firmly at heart. 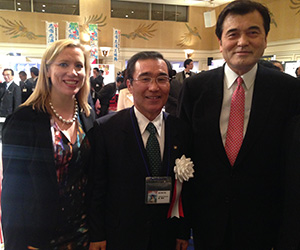 Anna Dingley, with attendees of a Kagoshima reunion in Tokyo in January

“Kagoshima? What on earth were you doing there?” I’m often asked this when I tell people where I lived the first time I moved to Japan. I love the fact that I lived on the “Land’s End of Japan”, and it was thanks to the Japan Exchange and Teaching (JET) Programme.

My connection with Japan started four years previously, when I read Japanese and business studies at the University of Sheffield. I knew that, to improve my spoken Japanese, I needed to be with native speakers so I applied for the JET Programme.

I requested posting to Hokkaido or Kyushu as I suspected that, in the future, I would have chances to visit the country’s main cities for work, while this would be a rare opportunity to experience country life. I was appointed to the most southern point of Kagoshima Prefecture, Sata, as the village’s first assistant language teacher.

At the time, Sata had a population of about 3,500, of whom 85% were over 65 years old. I stuck out like a sore thumb, but everyone was very kind-hearted and welcoming. My neighbours enjoyed introducing me to local delights such as shochu (distilled spirits) with hot water and an umeboshi (dried plum) dropped in; kurobuta (Berkshire pork); and bontan (a type of citrus fruit).

The JET Programme became a stepping stone for my career. In addition, being able to speak Japanese opened numerous doors to a wide variety of industries.

I have worked in Japanese business development roles for large corporations, including Bloomberg L.P., the London Stock Exchange and JPMorgan Chase & Co., as well as in public sector roles. I was pavilion manager for the British Pavilion at Expo 2005 Aichi in Nagoya Prefecture, and now am a consultant and Japan market specialist for UK Trade & Investment in London.

In this role, I introduced Prime Minister David Cameron to some of the largest Japanese investors in the UK; the chief executive of one grew up in Kagoshima.

After having lived in Japan for eight years, I returned to London in 2012 to establish Japan Connect Ltd., through which I work with a variety of firms. My experience working in global joint ventures, on public sector projects, in the finance sector, as well as with investor relations teams has shown me the challenges and opportunities faced by Japanese firms and their global counterparts.

I am privileged to be a board member of the Japan Society, which keeps me up to date with cultural and economic issues between our nations.

One of my first business conversations in London was with the chief operating officer of UK recruitment firm Robert Walters. We agreed that JET Programme alumni are a very talented group who are keen to work in Japan-related businesses, but often are not equipped with insights on the type of jobs available or vital connections required to break into industries.

We set up twice-yearly UK–Japan career and business seminars to help fill that gap. It has been a great way to link the wide UK–Japan business network and young professionals, in industries ranging from food and drink to high finance, government to infrastructure, and much more.

This year, in particular, I have been reminiscing about Kagoshima. It is the 150th anniversary of the UK arrival of the region’s Satsuma Students who studied science and technology at University College London.

It’s been a great opportunity to reflect on the long links between Kagoshima and the UK, which have grown stronger every year. Commemorative events have been held this year, supported by JET Programme alumni, and members of the Kagoshima community living in the UK.

In 2016, I will marry and move to Washington DC for a couple of years. Already, my friends from the JET Programme have said they can connect me with some of their alumni contacts. Even 20 years on, the JET Programme is still proving to be a stepping stone. And where are my future husband and I thinking of going on our honeymoon? Well, Kagoshima is high on the list.