Now in its 29th year, the Japan Exchange and Teaching (JET) Programme has welcomed more than 55,000 people from 62 countries to deliver grassroots international exchange between Japan and other nations. This column features former JET Programme participants who keep the idea of fostering mutual understanding firmly at heart.

While studying German and linguistics at university, I was delighted to see something different on the list of subsidiary subjects: Japanese. “Whenever are you going to use that?”, my friends asked. Little did they know that 10 years later I would be living and working in Japan, married to a Japanese. 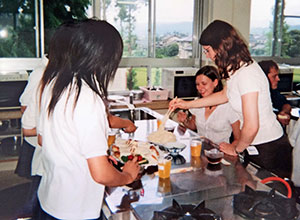 Joanna Lundt delivered cooking lessons to students while on the JET Programme.

In 2005, the Japan Exchange and Teaching (JET) Programme brought me to a sleepy town in Toyama Prefecture, nestled in a patchwork of rice fields and surrounded by the Fukumitsu mountains.

I still remember the moment I was dropped off at my little apartment in the middle of what seemed like nowhere; the air was heavy with humidity and cicada song, and local farmers were busy working in the fields.

Later that day, as I entered the village high school at which I was to work as an assistant language teacher, I asked myself how I, very much a European city girl, had landed in rural Japan.

My journey had begun three years earlier when the firm I was working for in Berlin became insolvent. On searching job advertisements, I found the Embassy of Japan was looking for a native English speaker with German and basic Japanese.

Within a month, I had started my new position as an advisor, delivering press briefings to the ambassador, writing speeches, editing and translating. The Japanese embassy resembled a mini Japan on German soil and I found it fascinating.

Three years of working there made me curious to learn more about Japan and, after a 10-day holiday in Tokyo and Kyoto, I was enchanted. Although I was settled, with friends and a job I loved, I decided it was time for a change.

Applying to the JET Programme turned out to be the beginning of a great adventure. The Japanese have a saying, oshieru wa manabu no nakaba (teaching is half learning).

While I taught children English and gave them insights into European life and culture, I learned from the community the secret of a good nabe (hotpot), methods of cockroach extermination, and how silence in a conversation is as important as words. As it turned out, this European city girl had a lot to learn.

My adventure continued to Tokyo, where I taught Japanese returnee students at a high school. The teaching advice and cultural insights I gained during the JET Programme were invaluable. I became increasingly aware of the different educational needs of various cultures and minority groups, and how important the adoption of intercultural policies is, not only in schools, but at a national level.

I developed an interest in diversity issues, the challenges faced by minorities in Japan, and intercultural communication. I realised this interest in my next career step working for a PR firm as a member of an international team implementing communication campaigns for foreign firms entering the Japan market.

In 2007, I married. As my husband works for the Japanese foreign office, we were posted to Vienna and Berlin between 2009 and 2014. At the Freie Universität Berlin, I attained a Master of Education in intercultural education. My thesis focused on Japanese burakumin (descendants of outcast communities who are often victims of discrimination).

Upon our return to Japan, I provided intercultural business training to both Japanese staff and foreign clients as a communications specialist at a PR consultancy in Tokyo.

This year marks my 10th anniversary since arriving in Japan with the JET Programme and I continue to contribute to international exchange.

I am now working at the British Chamber of Commerce in Japan where I am delighted to play a part in the promotion of business and cultural ties between the UK and Japan, and to be working in an organisation that promotes diversity and inclusion in the workplace.

My path will continue to lead me to many more countries and exciting experiences. But the path will also always return to Japan, which has now become my home.