A journey towards assimilation

Now in its 27th year, the Japan Exchange and Teaching (JET) Programme has welcomed more than 55,000 people from 62 countries to deliver grassroots international exchange between Japan and other nations. Ninth in our series, this column features former JETs, both in the UK and Japan, who keep the idea of fostering mutual understanding firmly at heart.

Readers of BCCJ ACUMEN will have no doubt heard quite a few Japan stories, especially those involving the Japan Exchange and Teaching (JET) Programme.

Many of you will have travelled along a similar path and have your own set of equally fascinating tales to tell. But I hope that you will indulge me and allow me to tell my own story and how I arrived at the BBC in Tokyo.

My tale begins in secondary school, when a good friend of mine introduced me to Japanese anime. We would set the VCR to record late-night sci-fi channel airings of B-grade shows and study intently the unfamiliar art styles and mature themes that were in stark contrast to the Saturday morning television we usually watched.

We soon realised, however, that we would need a teacher in order to really understand the language.

With that in mind, we petitioned the school to hire one and, with a small band of like-minded peers, we succeeded in beginning a 10-year legacy at Chatham Grammar School for Boys in Kent: a Japanese GCSE course. My experience culminated in a short trip to Japan that would forever alter my life path.

Five years later, after a gap year spent deep in the Japanese countryside at a care home run by Leonard Cheshire Disability, the UK’s leading charity supporting disabled people, and having graduated with a first class degree in Japanese and philosophy from the University of Leeds, I found myself very apprehensive.

Despite my success and newfound ability to read manga, I desperately wanted to employ my Japanese in the workplace, but was faced with the immense hurdle of trying to find a job in Japan.

The JET Programme offered a golden ticket back to the country. I was appointed one of only six coordinators of international relations from the UK, and was stationed in Okazaki, Aichi Prefecture, in 2009–12.

The staff at the local council welcomed this fresh-faced graduate with open arms and gave me the freedom to pursue many projects. I had the honour of interpreting for sister-city government delegations and hosting a variety of classes, including teaching local residents British English pronunciation. 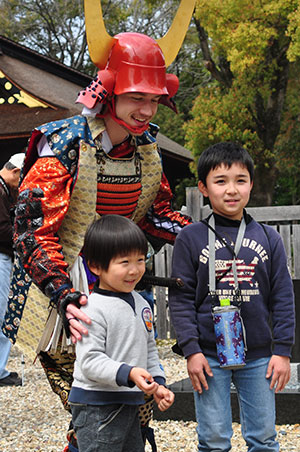 A festival brought opportunities to interact with local children.

I remember earnestly the time my samurai aspirations were fulfilled in a central role at the municipal festival. Donning full vermillion samurai armour, I played the part of Ii Naomasa (1561–1602), one of the four legendary guardians of the Tokugawa Shogunate, parading down local streets atop a horse named Rabbit.

It was during those few hours grinning on horseback that I learned there are few better ways to foster grassroots internationalisation than to stick a foreign national right in the thick of a buzzing Japanese festival. Another lesson was that growing a full-bodied manly moustache takes me much longer than a month.

The time spent maturing my Japanese on the JET Programme proved invaluable to my future career development. Afterwards, I went through the Japanese job-hunting scenario alongside university students, and after a laborious five-stage interview process, I landed my next job at BEENOS Inc. working for www.tenso.com, a forwarding firm. Then I moved on to work in digital marketing at DMM Corporation before arriving in my current role as digital business manager for BBC World Japan.

It is an exciting time to be working for the BBC. For some 20 years, the commercial side of the company has had a presence in Japan as a cable television channel, broadcasting breaking news around the clock in Japanese.

However, fast-paced developments online see people increasingly looking for news in the online environments with which they feel most comfortable. Video is at the heart of the BBC’s digital strategy to react to the changing environment, and here in Japan we have set our ambitions towards the launch of a Japanese language version of www.bbc.com.

I am fast approaching my eighth year in Japan. Curiously, it feels as though things have already weaved themselves into a full circle. I have arrived at a point where I can finally give something back to the UK, using my knowledge of a language and culture I love.

The JET Programme was an invaluable part of my journey towards assimilation here. It serves as a shining example showing just how crucial bridges between the UK and Japan are to building a strong foundation of trust and understanding, which ultimately fosters better relations and prosperity for both sides.