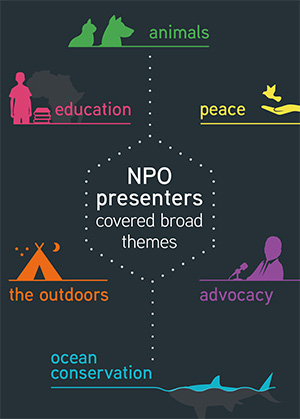 On 15 October, for a second consecutive year, the British Chamber of Commerce in Japan (BCCJ) organised a community hub evening. More than 70 people gathered at SuperDeluxe in Nishi-Azabu, Minato Ward, to hear presentations by six local non-profit organisations (NPOs).

The evening was powered by PechaKucha, appropriately since this format was first launched at SuperDeluxe in 2003. Co-founder of PechaKucha and director of Klein-Dytham architecture (KDa) Mark Dytham MBE, was on hand to explain the system: each presenter has 20 slides, which are shown on screen for 20 seconds—no more and no less, and there is no going back.

PechaKucha, which KDa had seen as a one-off event, has proved so popular that there are now PechaKucha nights in more than 800 cities worldwide. Dytham said that KDa permits one licence per city, and oversees an astonishing number of events: 124 in November alone.

Perhaps it is the discipline of the format that makes it so successful. Certainly the presenters at the BCCJ Community Hub event rose to the occasion. BCCJ members and guests listened to the presentations, which were delivered in a relaxed and friendly atmosphere.

Kicking off the proceedings was Elizabeth Oliver MBE, the founder of Animal Refuge Kansai (ARK). Its first animal shelter was built by volunteers 25 years ago.

Now, with 25 staff, the organisation looks after more than 300 abused or homeless dogs, cats and other pets.

Oliver spoke about the plight of such animals, many of them products of puppy farms. She urged people not to buy from pet shops.

ARK also has an office in Tokyo, which was set up 10 years ago. She said that following the Kobe and Great East Japan earthquakes many animals had been rescued and given refuge.

Ai Yamamoto had a similar story to tell. The representative of HEART Tokushima, an animal rescue and shelter facility serving Shikoku, Yamamoto said the centre had been set up there in 2006, but that the Great East Japan earthquake of 2011 had been a major turning point for its operation.

Jonathan Travis of the British School in Tokyo (BST) spoke of the school’s partnership with United World Schools, an organisation providing education for children in remote and post-conflict areas. The joint project aims to teach BST students that it is possible for them to change the world.

In particular, he focused on the way in which BST has raised funds to enable a school to be built in northern Cambodia. With 130 students and two teachers, Travis said thoughts are now on what is to happen next.

One possible move is to bring BST students to the Cambodian classroom in some form of reciprocal agreement.

Using education and art is the basis of work by PangeaSeed Japan, which is concerned with ocean conservation.

While sharks have been demonised in the public imagination, Lincoln spoke of their intrinsic beauty.

Another presenter was Dave Paddock, chairman of Mirai no Mori, an organisation that creates life-changing outdoor programmes for abused, neglected and orphaned children in Japan.

This organisation had its origins in 2003, Paddock said, when he founded a Tokyo-based firm, English Adventure Y.K., which offered the classic American summer camp experience to Japanese children.

A few years later, the firm partnered with the NPO Living Dreams—dedicated to empowering children living in welfare institutions—to invite such children to the camps free of charge.

Originally centred on the Greater Tokyo area, the project was expanded after the 2011 Great East Japan Earthquake and tsunami. Mirai no Mori was set up to ensure the continuity and effectiveness of such camps.

“People need people”, said Anjeli Narandran, international coordinator at Peace Boat, adding that this is what the Japan-based international non-governmental organisation is all about.

Peace Boat, she said, works to promote peace, human rights, equal and sustainable development, as well as respect for the environment.

It was founded in 1983 and seeks to create awareness and action based on effecting positive social and political change in the world.

Narandran said this is done through the organisation of global educational programmes, responsible travel, cooperative projects and advocacy activities.

In addition to the presenters, attendees included representatives of O.G.A. for Aid, which helps disaster survivors; Refugees International Japan, which supports the health, education and economic livelihoods of people displaced by conflict worldwide; and TELL, which provides counselling services and mental health support.