Pledge plea by a Scot whose manga has Chomsky nod 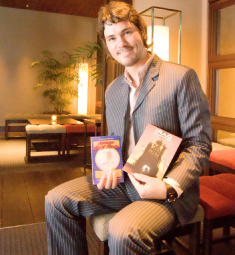 The only professional British manga writer based in Japan has launched Kickstarter campaign to drum up pledges for a new graphic novel that will tell the tale of US left-wing activist, economist, speaker and writer Michael Albert and have an introduction by Noam Chomsky.

Sean Michael Wilson has teamed up with artist Carl Thompson for the project—titled “Parecomic: Michael Albert and the Story of Participatory Economics”. Chomsky, one of the world’s best-known liberal thinkers, taught Albert at the Massachusetts Institute of Technology in the 1960s and is mentioned in the book several times.

The novel focuses on something that affects us all, says Wilson: the system that we live under, what is wrong with it, and how we might be able to change it for the better.

“It is interesting for me to consider and learn about these social issues. Doing a book of this type is like writing a thesis at university; I need to read a lot, do research and ask questions”, Wilson explained.

“It’s good to do stories that show the range of topics and issues that can be covered in comics, beyond both the usual material and the incorrect image of comic books being for kids”, he said.

“Second, it’s interesting to do documentary, social-issue, historical books, because I learn a lot in the process”, he added. “Specifically, in this book we use the visual medium to consider issues surrounding how we organise our societies and economies”.

To get the project off the drawing board, Wilson and Thompson are seeking support in the form of pledges made through the Kickstarter website.

The money is initially a pledge, and only will be taken out of a supporter’s account if the total target figure is reached. So far, 44 people have promised to chip in a total of $2,115. The target is to have $8,000 pledged—and that has to be achieved by 23 April, Wilson explained. 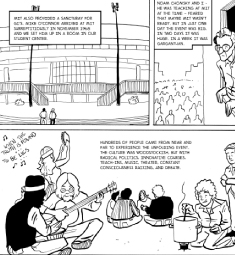 “Our Parecomic book drive is going pretty well so far; we’ve had lots of support and are on the money target so far”, he added. “The problem is that, if we don’t make the full target amount in the 60-day time limit, the creators get nothing at all and the money all goes back to the people who have pledged it—so please consider supporting the book!”

Wilson says he first developed a taste for graphic novels as a boy growing up in Edinburgh, and can still remember the moment he first saw the cover of the cult British comic 2000 A.D. in his local newsagent.

He arrived in Japan in 2004, after studying sociology and psychology, and completing a teacher-training course. Wilson lives in Kumamoto City and, so far, has had 15 works appear as graphic novels.

Yet, nothing he has tried previously is quite like this project, which examines the development, in the 1960s, of the anti-war movement in the US, civil rights issues, the women’s movement, the emergence of the Black Panthers group, as well as alternative media, such as the South End Press and ZNet.

“Parecomic shows us Michael’s story and, at the same time, the ideas and issues that influence both our society and the better alternative that we could build were we to apply the anarchist-influenced system of participatory economics—or Parecon, for short”, said Wilson. “And hence the title of our book, which rather started out as a joke, but has stuck”.

Albert has worked closely with Wilson on the words and Thompson on the images, verifying the authenticity of the scenes and the information. He will also be contributing a text section to the rear of the book about his Parecon ideas.

“The recent upsurge in popular protests in the US and around the world shows that people are not happy with the state of capitalism”, Wilson said. “The Occupy movements indeed show us that many people would prefer a better system, a model that will work for 99%, not just for 1%, of the population”.