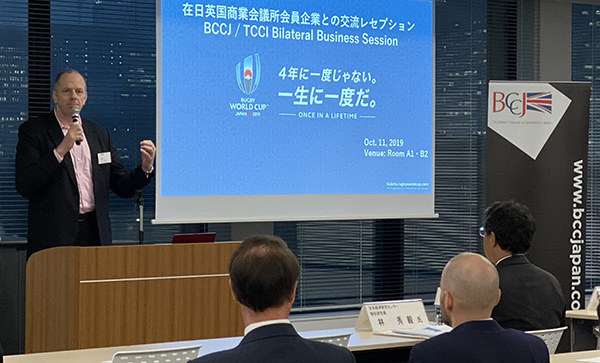 Everywhere you look, UK–Japan collabora­tion is blossoming. The year began with an announcement by Japanese Prime Minister Shinzo Abe and then-UK Prime Minister Theresa May that the two nations had agreed to a new partner­ship to promote technology and innovation. The agreement came during Abe’s January visit to London and aims to tackle the grand challenges identified by the UK’s modern Industrial Strategy and Japan’s Society 5.0 by finding ways for British and Japanese researchers and industry experts to work side by side.

In the nine months since, many stories of bilateral partnerships have emerged, and the British Chamber of Commerce in Japan (BCCJ) has worked to foster more. Building stronger ties between UK and Japanese businesses in Japan is key to success, and on 11 October the BCCJ hosted its first business matching session with the Tokyo Chamber of Commerce and Industry (TCCI) at the TCCI headquarters, overlooking the Imperial Palace.

She started off with the grand challenges of Society 5.0 and how the UK and Japan can tackle them together. These challenges include:

“These are the four areas that we’ve chosen to focus on, and where I would suggest there is lots of opportunity for UK and Japanese companies to collaborate,” she said. “As far as the govern­ment role goes, we are already collaborating very closely with the Japanese government to align our policies, to align regulations and to develop new regulatory frameworks for emerging technologies. There is no regulatory framework for the transfer of data or for autonomous vehicles. We need to be developing the policy frameworks and regulatory frameworks that will allow those to be exploited for the benefit of society.

“We’re working together to create global norms, global standards, and we’re doing that multilaterally of course, through the G20. Particularly this year, we’ve been very pleased to be able to work closely with Japan as it has held the presidency of the G20”.

Kinoshita also presented the concept of the Tech Rocketship Awards (TRA), which are designed to assist Japanese start-ups with global expansion. The TRA involve working with Japan’s Ministry of Economy, Trade and Industry’s start-up pro­gramme and hosting events with the Japan External Trade Organization and sector specialists.

“We could do so much better than we do things together rather than separately. My favourite example of that, actually, is in the science field. There is a recognised way of measuring the quality of research projects and, if you look at the data, UK–Japan joint research is of a higher quality than UK research on its own, or Japanese research on its own, or, indeed, UK–US research, UK–German research, Japanese–US research,” she said. “Which­ever partnership you look at, it’s UK–Japan research that has the highest quality, objectively measured by scientists. I think it’s very clear that there are synergies between what each of our countries can offer”.

The second speaker of the evening was Hideki Hayashi of the Japan Center for Economic Research and the Hitachi Research Institute. Noting the business opportunities presented by the Tokyo 2020 Olympic and Paralympic Games, he said: “Society 5.0 has not been acknowledged so much by the citizens of Japanese society, but the Tokyo 2020 Olympics and Paralympics can be a good chance”.

He outlined a plan that has been formulated to capitalise on that opportunity—the Tokyo 2020 Nationwide Participation Programme—and how it can help chart a prosperous course for the city after the Games have gone.

The first is implemented by government agencies, the host city, official sponsors, the Japanese Olympic and Paralympic Committees, muni­ci­palities in which venues are located and broad­casters who hold rights to the Games. The second is implemented by non-commercial bodies and other related parties and aims to encourage widespread public participation. Both cover eight key areas of business opportunity:

Hayashi also talked about the World Expo 2025, the second to be held in Osaka since 1970, and noted the coincidence that the last time Tokyo hosted the Olympics, in 1964, Osaka hosted the World Expo just six years later. As Japan attempts to bring greater business prosperity to regions beyond Tokyo, this event will boost the Kansai region.

Not to be left out, the Chubu region also looks to blossom as a location for UK–Japan business collaboration in the coming decade when the linear Shinkansen goes into service in 2027, shortening the travel time between Tokyo and Nagoya to just 40 minutes, considerably shorter than the current 100–120 minutes. And by 2037, this service will be extended to Osaka, making a short 67-minute trip between the city and Tokyo possible—much better than the two-and-a-half to three hours it now takes.

This is important because the Chubu and Kansai regions are key research and develop­ment centres. As Kinoshita pointed out, the quality of UK–Japan joint research is the highest in the world. And as Hayashi added in closing, “The two countries can work together to achieve the super-smart, data-driven economy to find solutions to the same social agenda”.

After an hour of presentations, attendees enjoyed an hour of food, drinks and the chance to meet people from a wide range of industries. The session was a wonderful chance for firms and individuals who may not normally cross paths to find common ground and identity opportunities for the kind of collaboration Kinoshita and Hayashi spoke about—all while Australia and Georgia fought it out in the Rugby World Cup on the large screen at the front of the room.