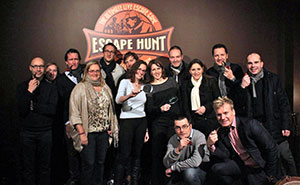 Excitement rises as we don our Sherlock Holmes-style cloaks and deerstalker hats and are shown into a room, from which we have to flee within 60 minutes. Looking for clues among the furnishings—all in keeping with a special theme—anticipation gives way to survival: we need to solve the mystery.

Our hosts are Escape Hunt Japan, Ltd. The firm celebrated its first birthday in August 2016 and, given the popularity of escape games worldwide, has big ambitions. These games are increasingly seen as the ultimate team-building activity: accessible, engaging and relying on grey matter rather than muscles.

As the only business in Japan with such offerings in English and Japanese, Escape Hunt has drawn global brands, such as Microsoft, Google and Nike.

Thought to have been started about 10 years ago, escape games have taken the corporate world by storm, in particular, given their value as a tool in supporting brainstorming, collaboration, creativity, trust and feedback.