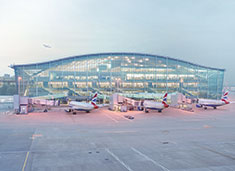 The Tokyo–London airline route—one of the longer international flight paths—is a focus of Japanese airlines.

The use of both of Tokyo’s airports—in well-separated locations—has enabled British Airways to offer customers effective services and great options. Both Narita and Haneda are strategically important for the airline, representing gateways not only to Tokyo, but also to locations nationwide.

Travellers arriving at London Heathrow Airport Terminal 5 will find a state-of-the-art, award-winning terminal exclusively for use by British Airways and Iberia Airlines customers. From this convenient hub, over 65 destinations in the UK and across the rest of Europe are easily accessible on the airline’s network.

With the launch of more than 10 new short-haul routes from London Heathrow and Gatwick Airport, British Airways is helping firms in Japan to foster greater business opportunities in Europe.

Based on March 2014 surveys of over 12mn frequent travellers, Terminal 5 was named Best Airport Terminal for the third year running by UK-based consultancy Skytrax. It also won the Best Airport Shopping award for the fourth consecutive year, due to the availability on the premises of more than 100 shops carrying some of the world’s best brands.

British Airways has a partnership with Japan Airlines and Finnair, offering customers an unrivalled range of destinations and fare options on flights between Europe and Japan.

Travellers can choose a different carrier for each sector of their journey—with an expanded network to suit their travel schedule—and fly from 40 points across Japan to 88 cities in the UK and the rest of Europe.

A pioneer in the airline industry, British Airways is also proud to have introduced many industry firsts, such as flat beds in business class and four-cabin aircraft with a dedicated premium economy class section.

New initiatives designed to save customers time before their flights, such as automatic check-in services and electronic baggage tags, are currently being trialled.

British Airways continues to develop and refine its ground-breaking products and services, in order to offer its customers an optimum travel experience.