With demand for air travel rebounding, Heathrow Terminal 5 over its teething problems, new aircraft ready to join the fleet, and alliances with other airlines enhancing its coverage, British Airways looks to have put behind it the turbulence of recent years, according to CEO Willie Walsh.

At an upbeat breakfast presentation to BCCJ members at the Hilton Tokyo on 24 November, Walsh outlined the airline’s achievements since he became CEO in October 2005, as well as its ambitions for the future. 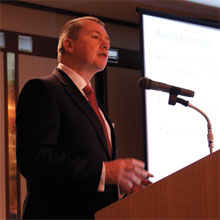 A former pilot with Aer Lingus, where he served as CEO before joining British Airways, he began by pointing out that in 1948, when the airline first started services linking London to Tokyo, the flying boats then used were required to travel 17,099km via Alexandria, Karachi, Bangkok and Hong Kong before arriving here. The journey that then took seven days, thankfully today is a fair bit faster, he added.

“It has been tough for our industry over the past two years, and for BA. With the first slowdown occurring in September 2008, by November the market had gone into reverse”, he told some 90 guests at the event, adding that the Lehman Brothers collapse means the firm can trace the start of the decline to a specific day.

The way passenger yields just crumbled in 2009 “was like nothing the industry had seen before”, he said, explaining that high-yield business travellers then took advantage of deals or flew economy class — or simply stopped flying.

But that’s in the past, he emphasised, BA having reported a pretax profit of £158 million for the six months to September 2010 and cargo demand up fully 40% year-on-year for the June to September quarter.

The firm’s figures have been boosted by drastic cost reductions — including among staff — and increased efficiency.

In regard to the future, Walsh said the planned alliance with Iberia, also in the International Airlines Group holding company, is “progressing well”.

“This is not a merger of brands, as both airlines will continue to look very much as they do today. But it will be a strong, integrated business that is able to compete with other airline groupings and with an excellent geographical fit”, he said.

Turning to BA’s state-of-the-art facilities, Walsh said that previously, “much of Heathrow had to be tolerated rather than celebrated, but I genuinely believe this will change with T5”.

The terminal recently welcomed its 60-millionth customer and Walsh now receives far fewer complaints about punctuality and baggage. Further improvements are being made in BA cabins, particularly in its long-haul first-class facilities, and the introduction of new Boeing 777 and Airbus A380 aircraft is imminent.

Walsh also said that BA intends to launch flights in February 2011 between the revamped Tokyo International Air Terminal (generally known as Haneda) and Heathrow, with five round-trip flights a week supplementing its presence at Narita International.

In addition, he mentioned the proposal for a venture with JAL that is being considered. Costs would be reduced by sharing facilities in an arrangement similar to the joint services agreement BA has with Qantas Airways of Australia.

“I’m very optimistic that 2011 will be a better year for this industry than 2010 has been, and I firmly believe that we will see a better economic environment than we saw in 2010 — which was already so much better than that of 2009”.