It is a rare person who doesn’t feel some kind of stress from their job, with a myriad of potential pressure points leading to mental strains and even adverse effects on health. The problem is particularly acute in Japan, due to its work culture norm being one of long hours and high pressure. But it is a global problem, too. Indeed, the UN’s World Health Organization has described stress as the health epidemic of the 21st century. 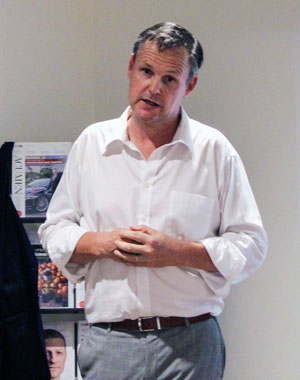 Developing strategies for managing and limiting stress have become more important then, and on 3 October at the British Chamber of Commerce in Japan, Tove Kinooka and Gavin Dixon, the co-founders of and consultants at the training firm Global Perspectives K.K., presented a toolbox session on how to develop resilience. Developed in conjunction with Refugees International Japan (RIJ), the session drew on the stories of refugees as examples of how to overcome major challenges.

After the introductory remarks, the toolbox participants were asked to come to the front of the room and arrange themselves in a line according to how stressed they feel on a typical day at work, with one end representing one (not at all stressed) and the other 10 (extremely stressed). Many clustered in the three to six range, and a few stood near or at the top of the scale.

Asked by Kinooka why they stood where they did, a number of responses were forthcoming. One man, who stood around the three mark, joked that he didn’t want to admit he was stressed, while others cited time-related pressures and demanding stakeholders as reasons for being further up the scale.

But the long-term effects of stress are no laughing matter, either for individuals or those around them. Attendees spoke of sleep deprivation, grouchiness and not being present at meetings as some of the effects of stress.

“Usually I start to feel a negative energy and an inner voice tells me, ‘You cannot do it’ or ‘It’s time to change your job’. But then I have my inner voice on a positive side, so I always have a conflict between the two of them”, one person said.

Although a certain level of stress can help push us to greater performance—for example in the way a looming deadline can encourage focus—over the long term, research shows it can lead to bad health, poor relationships, lack of engagement, erratic decision making and decreased productivity.

For firms, that can mean resistance to change, performance slumps, failing projects, a toxic culture at the firm, poor staff retention and erratic earnings.

Learning by example
To deal with stress, it is imperative for firms and individuals to build up their resilience.


“Things are changing so fast nowadays—more and more stress, more and more change—so organisations need to really get with this and build resilience to cope with it”, said Kinooka.

But what is resilience? According to Kinooka, it is “competence in the face of stress”. That is, “the ability to remain focused on your task, productive and connected to the organisational mission, rather than getting distracted by other things, while experiencing tough times”.

To understand what this can mean in practice, participants were asked to consider two extreme cases—that of refugees. In small groups, attendees read their stories and shared their thoughts on how they had demonstrated resilience. Adaptability, reflection, perseverance, determination, kindness and open mindedness were just some of the qualities identified.

Participants also spoke about the community aspect of the stories and how the subjects were able to turn to others around them or to offer help to those also in need. Similarly, it was noted how we can also do this when it comes to dealing with stress and cultivating resilience.

Growth mindsets
Dixon then shifted the session to focus on how we can build resilience on both a personal and organisational level.

“Looking at other people’s experiences, it’s very, very easy to understand what’s going on and what you should do; judging other people is simple”, he said. “But what we want to think about is how we can break out of a negative cycle to build resilience and overcome challenges.

“So what do we do? We develop a different mindset”.

However, this is easier said than done, not least because mindset has become an ill-defined buzzword.

To bring clarity to the situation, Dixon spoke about fixed and growth mindsets, as defined by Stanford University Professor Carol Dweck. According to her, fixed mindsets exhibit an inability to change, are usually based on fear—be it of failure, change or loss of status—and are the default setting to which we revert at times of stress.

Dixon went on to highlight a few key differences between fixed and growth mindsets:

“If you have a positive, growth mindset, you can embed positive habits to fall back on at times of stress, and outwardly that looks like resilience. But really it is just having the toolset to be able to deal with stressful situations”, explained Dixon. “It enables you to thrive when you’re faced with change, unforeseen challenges or difficult situations”.

Making the change
Making a transition to a growth mindset involves first identifying where you have a fixed mindset. To do that, Kinooka invited the audience to think about a situation about which they are unhappy. She then posed a series of questions: How might I be contributing to the situation? What is preventing me from doing something about it? How can I learn from this situation or view it differently?
To help with the move to a growth mindset, Global Perspectives has developed what it calls the 5As process:

“If you have a framework like this, then you can begin to break out of that cycle, create positive new habits, which then builds resilience in the face of stress”, Kinooka said. “You can then revert to them when things get more stressful. And if you’re doing that with individuals, the ripple effect goes throughout the organisation to help develop a resilient corporate culture”.

But Kinooka also emphasised that this needs to be supported by the wider firm. Teams should look at how they work under pressure, departments and organisations should look at their culture and how this helps or hinders resilience, and senior management should consider how they tolerate failure and what they are doing to create an environment where people can take risks.

Put into practice
The final words of the evening fell to RIJ Executive Officer Jane Best OBE, who addressed the lessons that can be taken from the experiences of the refugees with whom her NGO works.

“Once people have got over the trauma, and it’s a pretty awful trauma of losing homes and losing everything, they’ve then got to rediscover that they’re like us and they have these skills and talents that they can put into effect”, she said.

“Their stories are a powerful learning tool because it’s much more interesting to talk about somebody else and it pushes you to think outside of your box, and in some cases out of your comfort zone.

“It created a discussion, and then you’re able to look back and illustrate this and use these as examples”.