Statistics released by the United Nations Educational, Scientific and Cultural Organization in June this year confirmed that, during the past seven years, little or no progress has been made towards the United Nations Millennium Development Goal of achieving universal primary education by 2015.

A staggering 58mn children aged between six and 11—9% of the global population of this age—still have no access to schools. The figures for slightly older children (between the ages of 12 and 15) are even more damning: 63mn, or 17% of the world’s young teens, are not at school.

As caring, thoughtful human beings, we cannot but look at these numbers and feel concern, pity or perhaps even a sense of responsibility. Every child has the right to an education. Some of us might be moved to find out more or maybe make a small donation, but then the news moves on to another story.

Inevitably, most of us return to more mundane preoccupations and demands of day-to-day life. At least that was what I did until I was introduced to the remarkable work being done with some of the world’s poorest and most vulnerable children by United World Schools (UWS).

Their mission statement sums it up: “We work with communities to build schools and develop local teachers, providing a low cost and sustainable way to teach the unreached”.

Having built and opened no fewer than 20 schools in remote rural regions of the Kingdom of Cambodia, where it offers an education to more than 4,000 young people, the charity can certainly claim to be transforming lives in a very real and practical sense.

One of the newest of these schools, opened in early October at Dor Village, Ratanakiri Province, is sponsored—and will be sustained—by the community of the British School in Tokyo (BST).

This year BST celebrates its 25th anniversary. As we began to lay out our plans to mark this milestone, we knew that we wanted to celebrate just how far the school had come since its foundation, but we were equally keen to write another memorable chapter in its history.

From the outset, I was determined that one of our primary goals would be to build something lasting and meaningful for our students: something that might add to their understanding of the world around them, and help them to appreciate their place in it. 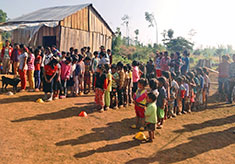 The local community is involved in school development.

The Dor Village School is that project, and it is our partnership with UWS that has made it possible.

To build the school we raised an initial sum of ¥2mn, but for our students and wider community, this work is so much more than a one-off charity fund-raising exercise.

Over the next 10 years we will continue to support the children and teachers of the village, and build on our links with the school—now our Cambodian sister school. There will be visits and exchanges, and I firmly believe the young people at BST will gain as much from the relationship as the children over there.

When so many in our world have so little, and so much is held by so few, it is surely more important than ever that education should take us beyond the narrow confines of our own experiences, and help us to stand in the shoes of others. With UWS I believe that we can do just that.