This year marks the 70th anniversary of the BCCJ, and as such we are bringing you a range of articles looking at the history of the chamber and UK–Japan ties.

This month we present the final instalment of an article written by Peter Bacon MBE in Britain & Japan: Biographical Portraits Volume X, published in 2016 by Renaissance Books, which was compiled and edited by Sir Hugh Cortazzi GCMG, a former ambassador to Japan.

This excerpt looks at how British electronic component manufacturers sought to sell their products to Japanese firms in Japan during the 1990s and 2000s, and the lessons they learned and successes they had.

We would like to thank Sir Hugh and the Japan Society in London, owners of the book’s copyright, for allowing us to reproduce the following article and for supporting our project.

In the 21st century, the electronics business increasingly moved out of Japan into other Asian countries. As a result, UK suppliers did not have the same clear focus on Japan as they had earlier and the number of new clients in the electronics field was not increasing sufficiently to cover the much higher costs of full-time staff. So it was decided that this venture would have to close. Electronics Link Asia Ltd (ELA) now became a small scale consulting operation and the office in Japan was closed.

The British Industry Centre (BIC) in Yokohama initially had a financial guarantee from the Department of Trade and Industry (DTI), although this was never called on, as the centre was fully funded by its tenants. It grew for several years, but as tenants moved on to set up their own offices the numbers reduced. The DTI decided to withdraw the guarantee and it closed. 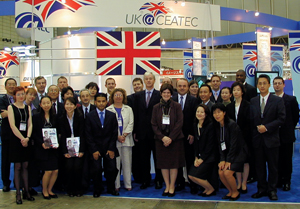 Our successes
More than 20 UK companies were clients of ELA. Ten companies won some 30 significant contracts.

Our most successful client was Cambridge’s TTP Communications Limited, spun out of The Technology Partnership to supply software and semiconductor IP for mobile phones. They grew their business in Japan with our help to £10mn per year. They then asked us to help recruit a Japan country manager and set up TTP Communications K.K. Other clients of ELA such as Wolfson also set up their own Japan office and worked closely with distributors. Our network of Japanese electronics contacts continued to grow.

Apical Ltd, another of our clients, had unique image improvement technology, which could help to improve photographs taken with digital cameras. As Japan was at that time the leading manufacturer of digital cameras, they focussed on the Japanese market. Their first customer was Nikon Corporation. And Olympus Corporation regarded them as the most Japan-oriented supplier they had ever met. Apical appreciated the support, which they had from JEBA and ELA.

Elixent Ltd was enabled to develop such significant business with Panasonic Corporation that Panasonic decided to buy the whole company, and set up its Panasonic Bristol Design Centre with a staff of more than 30. They had no experience with Japan until they worked with us. They had the right technology at the right time, and thanks to links with senior Japanese executives their CEO made a particularly good contact with Toshiba Corporation in his first week in Japan. They accepted all the challenges of the Japanese market and worked hard to meet Japanese targets. The late Kenn Lamb, CEO of Elixent, knew well how to do business in the United States and was determined to make a success of the Japanese market. He told us frankly that he knew nothing about Japan, and asked us to teach him everything that mattered. His only large customers were in Japan.

After Apical had gained four Japanese customers, they considered setting up their own office or at least a support facility for their customers. A new joint-venture company, Electronics Link Japan, with a sales and support function was set up under Steve Crane who brought some former staff members of the company of which he had been CEO. As time passed, Apical’s customers lost business to other Asian makers, and some Japanese customers developed their own technology.

Other companies such as Arm Holdings, CSR plc, and Imagination Technologies have made a huge success in Japan by having the advanced technology and absolute commitment that Japan was central to their plans.

Conclusions
The most successful companies were those where senior directors (including CEOs) were personally involved with their sales in Japan, and were willing to learn.

Japanese companies at times seem to be among the worst with which to do business with their pressures over quality and delivery, endless questions and seeming delays in decision-making. Yet they could be the best long-term partners and most reliable customers.

The main requirements for success in Japan were:

These basic rules apply not just in the electronics business area, but in all areas of doing business with Japan.

Footnote: June 2018
It is true that the Japanese electronics firms have lost some ground to other Asian competitors, but it is also clear that in terms of quality and specifications, Japanese firms still reign supreme.

Some of the UK firms with which I have worked are still developing impressive business links with Japanese firms, and I believe that the lessons we learned are still valid today.

World-leading technology, persistent and endless quality improvement, and the personal commitment of the CEO of the UK firm to the Japanese market are still key to success.

As an example, I have followed Apical tech­nology which is still used in a famous Japanese electronics firm’s products, and we remain in contact with that Japanese firm, who regularly want updates. Apical was bought by ARM which was bought by SoftBank Group Corporation. Elixent Ltd was purchased by Panasonic, and I believe this is also to the long-term benefit of Panasonic.

I have contact with some other firms working with Japan, and see that there is still an appetite for technologies that are world leading, and when they are persistent enough I feel sure of success and still advise one who has been persisting for seven years or more. But their time will come soon as 5G and similar technologies emerge and Japan readies itself for the 2020 Tokyo Olympics and Paralympics, where some world leading Japanese products will surely be seen.

So while times change, the need for strong relationships does not, and we wish all those doing business in Japan the greatest of success.