As we carry on with our series looking at the history of the BCCJ and UK–Japan ties, we bring you an article written by Peter Bacon MBE and commissioned by Sir Hugh Cortazzi GCMG for the 2016 book Britain & Japan: Biographical Portraits Volume X, which he compiled and edited. It was published by Renaissance Books.

The article looks at how, in the 1990s, British electronic component manufacturers sought to sell their products to Japanese companies in Japan, the lessons they learned and successes they had.

We would like to thank Sir Hugh and the Japan Society in London, owners of the book’s copyright, for allowing us to reproduce the following article and for supporting our project. The following is the first part of the piece. The second part will be featured in the July issue of BCCJ ACUMEN. 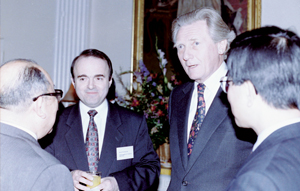 Selling to Japanese companies in Japan
The Department of Trade and Industry (DTI) over many years sponsored various programmes focussing on Japan including ‘Opportunity Japan’, ‘Priority Japan’ and ‘Action Japan’ campaigns. In 1993 Michael Heseltine, then secretary of state and president of the Board of Trade launched the Export Promoter (EP) Initiative. Ten out of the 100 budgeted EPs were allocated to the Exports to Japan Unit (EJU), which was backed by Richard Needham, the minister of trade who had longstanding links with Japan.

I was the 13th businessman seconded to the unit to follow up on the Japan Electronics Business Association (JEBA) initiative and build business links between Japanese inward investors and the UK supply base. I was closely involved with the missions sponsored by JEBA and was then encouraged to set up a company to carry this work forward.

Electronics Link Asia Ltd (ELA) was est­ablished in 1996, at the end of my secondment to EJU, and continued until 2012, working closely with the British Embassy Tokyo and the British Consulate-General in Osaka. The office rental was initially covered by DTI, but British companies who used its services soon wholly funded the costs of the venture.

The Japanese electronics companies with whom we dealt eventually lost market share to other Asian countries, British companies who had used our services set up their own offices and business needs changed. The company was accordingly wound up in 2012. Some limited consultancy work still takes place but on a reducing scale.

Working with JEBA
Sir Ivor Cohen has described in Part I [Britain & Japan: Biographical Portraits Volume X — Part I: Selling to Japanese manufacturers investing in Britain] the establishment of JEBA and its ‘design-in’ missions. A key aim was to persuade British suppliers to learn from the Japanese companies and in doing so, to develop long-term business relationships. It would have been fruitless to insist on more local content, when many of the UK suppliers were not in a position to supply parts of the quality needed.

We started in 1993 by visiting the Japanese electronic companies investing in Britain. They told us bluntly that British suppliers just weren’t up to the job, and did not understand the Japanese insistence on maintaining the quality of their products. I recall being whisked to one major Japanese mobile phone headquarters to meet four identically grey-suited corporate executives, who took turns to tell us that we had little chance, stressing that their quality must not be compromised by using overseas suppliers.

Several British and Japanese managing directors of Japanese companies in the UK who wanted to increase local content encouraged us to persist. So in 1994 we assembled our first mission of 10 companies.

In one exchange with Mitsubishi Electric (MEI) in Scotland we were told that they had looked for British suppliers but they were “all bad”. We responded by telling them that we wanted to work with their design staff in Nagaoka-kyo, Kyoto, and would introduce 10 good British suppliers to them. The challenge was taken up and when we visited them in Kyoto on our first mission in 1994, we met all their design section heads. One British company at least developed business relations with MEI as a result of that first meeting. The members of our first team were all enthusiastic and a good impression of the UK supply base was created, but this was only a beginning and real business had yet to be done.

One particular supplier who showed the persistence needed to succeed in Japan was visiting Panasonic Kadoma. When he was told that the (key) person he needed to meet was unavailable that day he replied that he must meet someone that day, as otherwise his whole visit to Japan, including travelling to Panasonic Kadoma, would be fruitless. He waited patiently for an answer. Eventually he was asked if he was ready to miss lunch and take a taxi to another office where the key person he needed to meet now became available after all.

These two stories from our first mission explain how the Japanese companies began to recognise our enthusiasm to do business and willingness to learn. 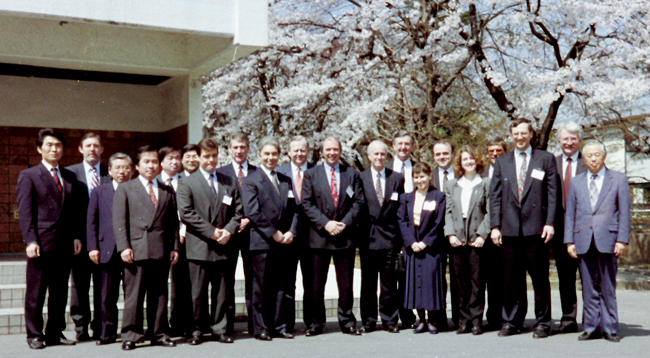 First meeting of initial JEBA mission to Japan in 1994

Better suppliers
The mission’s visits to Japanese factories started with group presentations to the company. One to one meetings followed these presentations. As each company explained what they had to offer in front of one another as well as the Japanese customer, several had to smarten up their stories. We soon learnt what worked, and what didn’t.

The Japanese companies were impressed by the fact that we visited them as a group in places often far away from Tokyo involving demanding travel schedules. We did, of course, have embassy receptions and displays, but the key to success lay in the meetings which we had with decision-makers often deep in the Japanese countryside. For a meeting to be successful it needed thorough preparation in advance, so that the Japanese side could collect the relevant people together who would make the necessary collective decision.

The Japan External Trade Organization (JETRO), noting the support given to us by DTI, started to give us their enthusiastic backing, firstly by funding interpreters, but then also offering to fund senior Japanese executives to travel from Japan to the UK. These senior executives spoke to us in the JEBA seminars in the UK chaired by Sir Ivor Cohen and we asked JETRO to arrange speakers who would teach us about Japanese business and how to be better suppliers. This was industry-to-industry support facilitated by the DTI and funded by JETRO.

Our first speaker was Kanoi Nobuo, who was at that time chairman of Aiwa Ltd. but had been the executive vice-president of Sony Corporation TV division, and with whom, when [working] in Philips, I had had several discussions, as we needed to learn how to become better suppliers. Following Kanoi Nobuo, we had other senior executives, including Dr Sekimoto, president of NEC Corporation, Mr Kataoka, the president of Alps Ltd. who was very supportive, and Mr Sakurai, president of Ricoh Corporation, who had opened the firm’s factory at Telford. This further raised our profile in Japan and opened more and more companies’ design centres to us. Several executives from the UK operations of Japanese companies went on to higher things in their companies, and stayed in contact.

In total there were eight so-called design-in and high technology missions as the programme evolved into supporting technology exports to Japan. An interesting new challenge emerged in the UK, namely how to persuade high technology companies to work together on a mission with companies whom some considered to have inferior technology. The managing director of one Cambridge company initially declined to participate as he thought he would be “polluted” by association with other companies with humbler technology than his. But his wiser fellow director explained that we had the ear of senior Japanese management thanks to the JEBA brand, and embassy support at a high level; so they had nothing to lose. The senior contacts made at one Japanese company on that mission led to business worth millions for this Cambridge company (This was the same company that told us we had no chance!).

The embassy and the consulate-general gave enthusiastic support to companies on our missions. Tsukatani Akiko at the consulate-general was particularly supportive in promoting the companies, and said that their strenuous efforts had generally raised the UK industry profile in Japan. We visited the headquarters of Makita Corporation in Anjo, Aichi-ken in 1995. The Japanese managing director of its Telford factory had explained to his management that a mission organised by the British government was coming to their factory, and urged them to look after us. When we got to the factory the entire top management team of the company was seated before us in proper status order, with scores of staff seated behind.