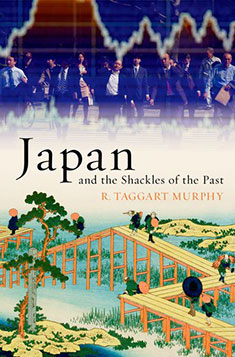 What hinders freedom in Japan

Without doubt, this is the most important book on Japan by a non-Japanese writer to have appeared in the last two decades. It should be required reading for anyone professing to know Japan or wishing to teach others about it.

The author, R. Taggart Murphy, is professor of international political economy at the MBA Program in International Business at the Tokyo campus of the University of Tsukuba. But Japan and the Shackles of the Past is no dry academic treatise.

A long-time resident of Japan, Murphy clearly loves the country and its people. Yet, he is far from being unwilling or unable to criticise and recognise the deep malaise that has afflicted Japan—aspects of which, according to the respected author Karel van Wolferen, invite “future disaster for the region and possibly the world”.

What Murphy has done so masterfully is to put Japan’s current difficulties into an extremely impressive historical context. He articulates, with great clarity, the significance of that history and its impact on virtually every aspect of life today.

The shade of the country’s feudal past is in many ways very much still with us; understanding those influences goes a long way to explaining the many apparent contradictions that puzzle so many Western Japan watchers.

He sheds valuable light on Japan’s “hidden champions” (a term, coined in the late 1980s by management expert Hermann Simon, referring to firms with less than $4bn in annual sales and that enjoy large local and global market shares, while remaining relatively unknown).

Thus, while many business commentators are familiar with the big brands—Toyota, Sony, and so on—these are no longer Japan’s most profitable businesses.

Indeed, as Murphy points out, “the most profitable company in Japan in the first decade of the 21st century was Keyence, making sensors, barcode readers, digital microscopes, and various types of high-precision measuring equipment”.

Never heard of them? Neither had I. Nor had I heard of all but one of the rest of the top five: Fanuc Corporation, Hirose Electric Group, Pacific Metal Company and Union Tool Co.

Murphy offers similar perspectives on other areas of contemporary Japan: politics is understandably in his sights.

His opinion of Abenomics and the real motive behind Prime Minister Shinzo Abe’s need to take control of both houses makes for fascinating reading: it is as much about hard-nosed politics as it is about the economy.

But there are also the matters of gender relations as well as a rapidly changing business landscape, and the culture—both high and low.

Murphy explores each area he touches on with tremendous sensitivity, demonstrating how the shackles of the past hinder true freedom today.

What is likely to surprise many readers, however, is Murphy’s take on current Japan–US relations. Supposedly Washington’s closest ally in the Asia–Pacific region, the country has to all intents and purposes vanished from America’s radar.

In many ways Japan is seen as a spent entity and yet Capitol Hill’s influence over what Tokyo can and cannot do appears to be as strong as ever. Or, to put it another way, Tokyo’s deference to Washington is undiminished.

Author van Wolferen, who wrote of The Enigma of Japanese Power, believes that Japan is not a free country. Murphy’s book explains in no uncertain terms why that is so.