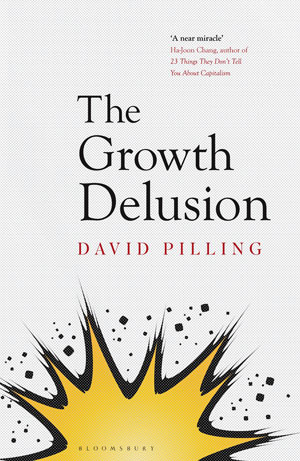 Human beings have long attempted to place a framework on the world, so as to better understand it. While in the past that would have been predominantly philosophical or religious, in the 21st century it is overwhelmingly economic, with one thing at the centre of this worldview—gross domestic product, or GDP.

Giving us a reality check is The Growth Delusion, a new book from David Pilling, the Africa editor of the Financial Times and the paper’s former Asia editor and Tokyo bureau chief.

Criticisms of GDP are nothing new and are far from being outside the mainstream. Indeed, in 2010, then-British Prime Minister David Cameron argued that wellbeing was just as important a consideration as wealth. “It’s time we admitted that there’s more to life than money”, he said.

And in the same week that The Growth Delusion was published, experts at the World Economic Forum in Davos spoke out against overreliance on GDP. But the “Cult of Growth”—as Pilling puts it—persists, and this book presents a strong case for why it shouldn’t.

The limits of GDP as an indicator of national wellbeing were thrown into sharp relief by the twin shocks of Brexit and Trump’s election—events that hitherto had been unthinkable. These were, at least in part, precipitated by economic dislocations that dated back to before the financial crisis, but which had been largely masked by supposedly buoyant or recovering economies.

As Pilling writes, when we look at GDP to see a reflection of ourselves, the mirror is “more of the fairground than the bathroom variety”.

With the two shocks having occurred in a context of declining trust in experts, The Growth Delusion sets about trying to rehabilitate economic expertise by delineating its limits and showing how it might be improved.

Pilling gives an enjoyable rundown of the origins and deficiencies of GDP, including its numerous oversights. These, among other things, mask the harmful effects of growth—most notably environmental destruction—and also overlook the contribution of the Internet, volunteering and the state.

The chapters dealing with the misleading nature of GDP are fleshed out with past and present real-world examples. In the main, these round out the book’s points nicely. Together with Pilling’s prose, the examples help elevate the volume above the kind of academic exercise that any treatise on statistics could so easily become. Yet the sections on Trump’s election and the great financial crisis are less satisfying, given that the topics and their presentation feel well worn, and occasionally seem to stray from the main subject at hand.

That said, Pilling presents some interesting insights in those chapters. He notes, for example, that a 1993 update of the UN System of National Accounts had the effect of making riskier loans contribute more to growth than they had previously. And so, overnight, a seemingly academic change put a gloss on the kind of behaviour that led to the worst recession in recent memory. This also explains the reason that economies have struggled to regain their pre-crisis vigour: that growth was, in part, a trick of accounting.

But more than just being a straightforward analysis of GDP, there is a philosophical and ideological thread to the book, with questions of how we define GDP and the value we place on things saying much about our conception of the world and our place in it. This is expressed most clearly in the final section’s chapters on nature and happiness.

Pilling does not merely present a critique, but also offers some suggestions as to how we might remedy our misunderstandings, although the reader does get a sense of how this is no easy task. In the end, the author settles on a dashboard approach, recommending a suite of indicators—ranging from CO2 emissions to median income—to better show not only how the economy is performing, but also what it means for our lives.

As Pilling writes, the aim of the book is not to declare war on growth but, rather, to set it in its proper context. In doing so, we can make our public debate more insightful and more meaningful, and governance more enlightened. In an era of disputed facts, that task becomes all the more important.