The world came to Japan’s assistance in the immediate aftermath of the disasters that devastated much of the north-east in March last year but, nearly 12 months on, the people of those coastal communities need a helping hand that is slightly different, according to those taking part in the BCCJ’s “Dateline: Tohoku” panel discussion.

The panellists at the 25 January event in Tokyo were representatives of a Japanese NPO, an NGO based jointly in Britain and the US, and a private firm that offers data centre, network and technology services. Forum participants shared the belief that, while specific requirements vary greatly in the different towns and villages up and down the coast, there is now a pressing need for help that will enable the communities to rebuild according to their wishes.

Randolph Martin, US-based Mercy Corps’ director-at-large for East Asia, said the situation he witnessed in Tohoku just days after the quake was different from any of the other disaster zones he had previously visited.

Describing the staff of a shattered convenience store in Kesennuma setting up a table to sell what little stock they had left, Martin commented that their desire to get back out and serve the community was nothing short of remarkable, given that each of those individuals still must have been in shock as a result of their own experiences. 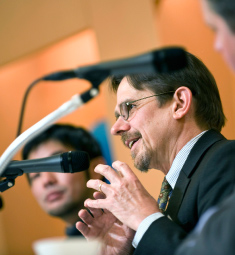 And it also demonstrated that simply trucking in aid is not the long-term solution to Tohoku’s problems.

“We have to assist the people to help these markets recover,” Martin said. “What bothers me is that we describe the people of Tohoku as hapless victims of this disaster, but I see them as resilient survivors—and these are the people we have to reach out to and help for Tohoku to recover.

“The relief distribution in the days after the disaster was important, but that was a Band Aid,” he added. “The businesses in these communities are their hearts, and we have to get them pumping again.”

President and Chief Executive Officer Richard Warley of KVH Ltd. agreed that the ready motivation to assist in the days and weeks after the disaster struck has inevitably dwindled, but stressed that now is the time to re-engage—in ways that will be more effective over the longer term.

In the disaster’s immediately aftermath, KVH donated relief funds to the Japanese Red Cross, but Warley said the firm soon started looking for a way to provide “smarter and more strategic” assistance that would mean a more enduring commitment.

That led the firm to seek out a single affected community, and they had settled on Naraha, which is just inside the exclusion zone around the Fukushima Dai-Ichi Nuclear Power Plant. After half of the approximately 1,200 residents moved to a host community around 100km inland, KVH provided summer clothing for the children, bought a bus—complete with a logo of the village they had been forced to abandon—and held fundraising events throughout the summer.

“We want to build for a long-term economic future,” he said. “And we want to try to avoid actions that have an adverse impact on the community, such as simply bringing in food to give people, which undermines local shopkeepers and the local economy.”

The third member of the panel, NPO executive director Ryo Ijichi, from On The Road, said it was his impression that the government had learned lessons from the 1995 Kobe earthquake and so had been far quicker to throw all its resources at the problem, including mobilising the military to help.

But the two natural disasters are very different, he pointed out. It had been clear immediately that Kobe would be rebuilt as a city, similar in character to that which had been damaged so badly. That is not the case in the north-east of Japan, however, as the quake and tsunami may very well be body-blows to communities that had already been losing their younger members to the big cities.

But there is hope, and that hope needs to be encouraged and nurtured, he said.

In the town of Onagawa, close to Ishinomaki, only five stores are operating, down from more than 50 before the quake. The owners of the stores that have not been able to reopen want to build a temporary shopping centre, but lack the funds to do so, he explained.

It is precisely this sort of project that requires outside assistance today, Ijichi said. If funds are not forthcoming, the former store owners will move away and the community will dwindle further.

BCCJ Executive Committee Member Graham Davis, head of the Economist Group’s operations in Japan and moderator of the discussion, said that following the quake, the scale of the effort by the BCCJ, the British Embassy Tokyo, UK firms, as well as individuals had been “very impressive”, and that Ambassador Sir David Warren’s knighthood had been richly deserved for his leadership. But Davis added that, while much has been learned from the events of last March, a great deal more remains to be done.