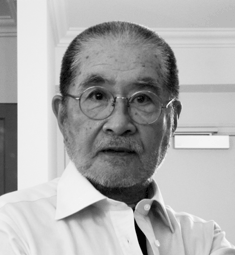 Masayoshi Sukita’s 40-year collaboration with one of the music world’s most enduring and successful artists almost didn’t happen.

The Fukuoka Prefecture native was a 34-year-old fashion photographer when he paid his first visit to England in 1972, initially to photograph Marc Bolan, the former frontman of glam rock band T. Rex.

He arrived to find a country in the middle of a post-1960s funk and gripped by industrial strife, but buzzing with the emergence of a new breed of pop artists spearheaded by the likes of Bolan’s T. Rex and David Bowie. 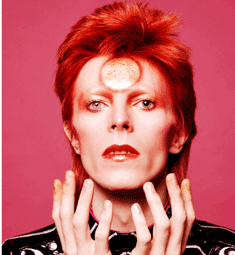 Photographed in 1973, the year of Bowie’s first Japan tour.

Sukita met Bowie’s then-manager through an introduction by Japanese friends in London. The photographer showed him his Bolan portfolio and duly secured a meeting with the musician himself.

“I knew very little about Bowie at the time”, Sukita, fresh from a shopping expedition to—where else—Tower Records, told BCCJ ACUMEN at a Shibuya café.

“I’d only seen him in a poster and was struck by the fact that he didn’t look like an average rock singer—he was wearing make-up for one thing. I’d only ever seen that in independent films and theatre productions.

“I spoke hardly any English, so I had to rely for translation on my friend, Yacco, a make-up artist in London. Despite the language barrier, Bowie and I immediately hit it off. There seemed to be an understanding between us, even though we sometimes had no idea what the other person was saying”.

The hefty, limited edition publication contains photographs taken in the UK, Japan and several other locations on 14 separate occasions between their first encounter in 1972 and 2009.

The book’s first shot shows Bowie in the kind of extravagant costume that defined the glam-rock years: a decorative Japanese silver moon adorning his forehead.

However, the Japan connection doesn’t end with the photography.

Many of Bowie’s most memorable ensembles were the work of Japanese designer Kansai Yamamoto. 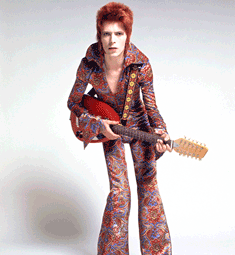 Bowie and Ziggy Stardust in 1972

Sukita’s first meeting with the musician was the start of a professional relationship that spawned countless images of the singer as he underwent numerous stylistic and artistic reincarnations.

But there was time, too, for Sukita to capture him during more private moments away from the stage.

Sukita pauses often to retrieve photos from his iPad that best illustrate a certain time in Bowie’s career. Aside from Bowie, I caught glimpses of Sukita’s other illustrious subjects, including Bob Dylan, Joe Strummer and Andy Warhol.

The collection covers practically every historic gathering of rock and pop musicians of the 20th century, from the Woodstock Music & Art Fair in 1969 to London’s Victoria Park festivals in 1978.

Sukita briefly considered making London his home, but decided to return to Japan and continue his nomadic existence as a music and fashion photographer.

The gaps between assignments with Bowie, he said, gave him a fresh perspective that he might have lost had he been in closer proximity to the star.

“I don’t think our relationship would have lasted 40 years if I’d been living in London,” he said. 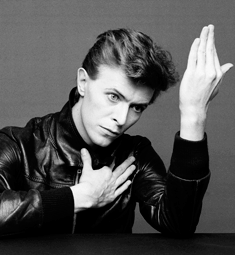 Masayoshi Sukita took the cover of Bowie’s Heroes album in 1977.

Sukita was on hand to photograph Bowie on the singer’s various trips to Japan, including a visit to Kyoto in 1980, that show his subject at, perhaps, his most relaxed.

The images show Bowie in a café, dressed in a simple striped shirt and tank top, puffing his way through a pack of Japanese cigarettes; looking through samples of colourful fabrics in a kimono shop; conspicuous in a full-length black leather overcoat as he inspects unagi (broiled eel) at a market.

“I sat in the back of the car and David drove while I guided him around the city”, Sukita said of their time Kyoto. “When other foreign stars came to Japan they went to see all the same sights, then you just sent them on their way back to the US or the UK. But he was different. We both wanted to get to the heart of the city, into the markets and the backstreets”.

In the foreword of the new publication, Speed of Life, Bowie makes clear that the affection and admiration Sukita clearly feels for his most famous subject is reciprocated.

The sheer number of photographs took Bowie by surprise, the foreword reveals—from those covering the Ziggy Stardust years to the legendary Rainbow concert in London, and their adventures on the Tokyo subway. 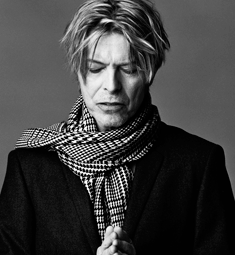 Heathen was released when this photo was taken in 2002.

“It seems Sukita-san got them all,” Bowie wrote. “I can’t thank him enough for putting this book together as it represents a wonderful volume of memories for me, the great times that I had in Japan and the friends I made”.

Bowie drastically reduced his workload after undergoing heart surgery in 2004, and Sukita isn’t sure they will ever be reunited, at least in Japan. He is certain of one thing, though—that Bowie, as an artist and a person, is a one-off.

“He was constantly changing”, said Sukita, who is still working and exhibiting his photography. “At heart, he was a rock ’n’ roll singer, but he brought something different to his music.

“He took all of these influences and turned them into something new. That’s what I find most appealing about him. There must be something special about him for me to want to photograph him for 40 years”.