During his presentation—entitled Disruption, Expectation and Complexity: The 21st-Century Business Imperative—Jacques shared with the more than 100 attendees his views on how indus­tries must respond to complex and constantly changing realities.

According to Jacques, four themes define the era of complexity:

Acknowledging geopolitical uncertainties—particularly in the realm of trade—Jacques said: “The first [theme] is the rise of powerful global forces which are impacting geopolitics and trade. Geopolitics have become more complex, and we have seen a breakdown of political consensus in several major economies”.

He noted that Japan, Rio Tinto’s third-largest market, is an exception to geopolitical tensions. As one of the largest suppliers of raw materials to the country, the firm established a corporate office here in 1966 and has since fostered an indestruct­ible relation­ship. Today, Japanese firms are joint-venture and technology partners in various Rio Tinto projects around the globe, includ­ing AutoHaulTM, the world’s first auto­mated heavy-haul long-distance rail network, which has been deployed in the Pilbara region of Western Australia.

In addition to geopolitical tensions, he stressed the negative consequences of political shifts. “The rise of protectionism is threatening global trade,” he said. “Globalisation has led to many major compa­nies relying solely on complex supply chains, which means that products often cross borders many times before the finished item is ready for sale”.

The second theme, according to Jacques, is that global growth will remain biased towards emerging markets as economic power shifts from West to East. Experts predict that by 2030 China will become the world’s largest economy, followed by India. In the face of this anticipated growth, Japan is expected to drop from being the world’s third-largest economy to being the ninth. Jacques, however, remains opti­mistic about Japan’s ability to take advantage of opportunities.

“There is absolutely no doubt that Japan is well placed to capitalise on this shift,” Jacques said. He then praised Japan’s leadership for initiating free trade and bringing the 11-nation Compre­hensive and Progressive Agreement for Trans-Pacific Partner­ship (TPP11) to fruition despite the US having abandoned the original plan.

“Technology, in all its forms, will play an ever-greater role in both enabling and disrupting industries,” said Jacques. As Japan pioneers Society 5.0—a super-smart society—the importance of tech­nology will remain high. In particular, he suggested that Japan leverage tech­no­logy to address the drop in labour productivity and shortage of skills that come with an ageing workforce.

And, in the disruptive mindset, Rio Tinto began building its first “smart mine”, Koodaideri, in the Pilbara region. Once completed, Koodaideri will have autono­mous trucks and drills, as well as data analytics capabilities. It will also have a digital twin—a virtual simulator of the mining operations. Koodaideri is expected to deliver its first iron ore in late 2021. 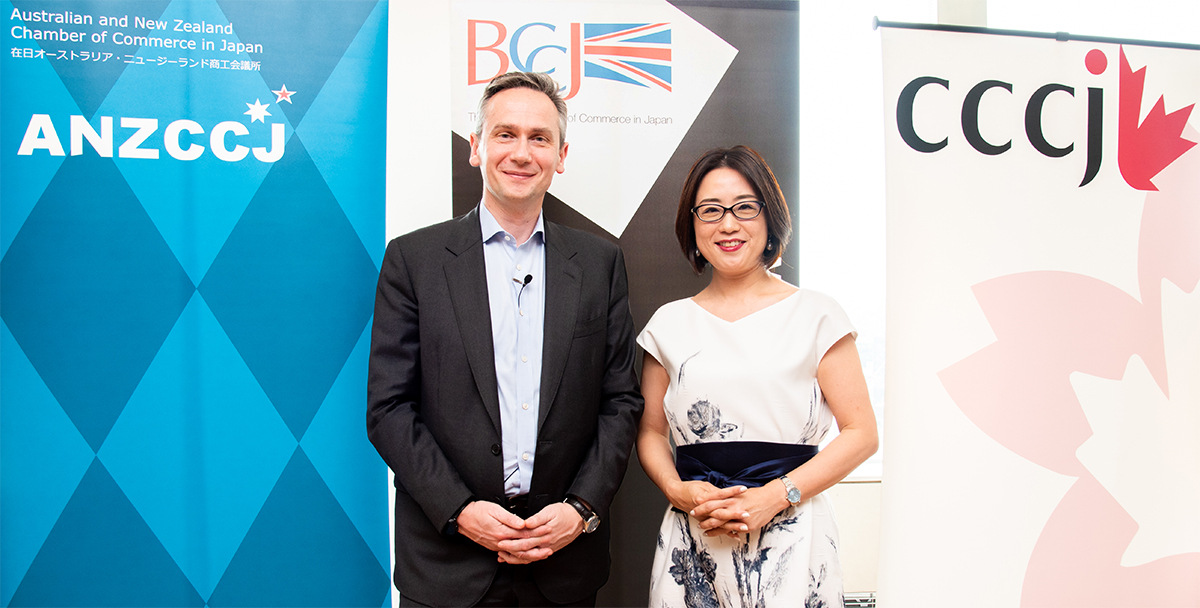 This year, Rio Tinto published its first report on climate change, using as a framework recommen­dations by the G20’s Task Force on Climate-related Financial Disclosures. In doing so, Rio Tinto esta­blished four key ways the company intends to transi­tion to a low-carbon future:

In highlighting the importance of a low-carbon future, Jacques said: “The environment and climate change are top of the agenda. The next generation of employees want to work for companies with purpose”.

After almost 150 years of pioneering exploration, expansion, diversification and innovation, Rio Tinto has become one of the world’s largest producers of essential materials and a major force driving human progress.

In addition to the four themes, Jacques addressed how to capitalise on opportunities:

While the presentation was largely about tackling the key components of excelling during the age of complexity, the main takeaway was the willingness to partner. “I believe success in this new era will require a type of leadership. One that embraces complexity and partnership in all its forms”.