The British Chamber of Commerce in Japan (BCCJ) played lead host for the second Rugby Alliance event, “Diversity in Rugby,” on 26 March at the Conrad Tokyo.

More than 200 attendees learned about the sport’s wide appeal and how it is not just a game for men but is also embraced by and supports women and children.

“Back in 2009, women’s sevens became an Olympic sport. This had a major impact on the world of rugby,” Asami said. “The tradi­tional strong­holds of rugby have been, of course, England, Australia and so on—for both men and women. But the adoption of seven-a-side rugby by the Olympic Games played a key role in the exponential growth in the number of rugby players—especially in the Asia region and among woman”.

Moving on to regional participation and the use of rugby as a learning tool, Bickle asked Hansson how Jaguar Land Rover, one of the world-wide partners of the Rugby World Cup, supports the community.

“Rugby World Cup gives us the opportunity to promote rugby and Land Rover all across Japan,” he said. “It deals with youth sports, which we—and me personally—believe in as a strong societal contribution, and it also brings activity to parks, which is a big focal point”.

The event was closed with remarks from Rugby World Cup Limited 2019 Executive Director Rob Abernethy, who said: “We believe that rugby is the perfect vehicle for inclusivity and diversity. To put it simply, World Rugby’s mission is to grow the global rugby family and vision as ‘a sport for all, true to its values’”.

The Rugby Alliance is a joint-chamber group comprising chambers of commerce in Japan representing Australia, Canada, France, Ireland, Italy, New Zealand, South Africa, the United States and the UK, along with the Tokyo Chamber of Commerce and Industry. 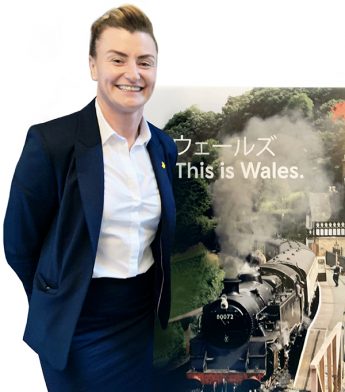 On 28 March, the Welsh Government hosted a rugby-related press conference at the British Embassy Tokyo. Former Wales women’s captain Rachel Taylor, seen on this issue’s cover, joined the event, which focused on the role that rugby can play as a core part of the Wales–Japan relation­ship and what it means for Welsh Rugby to be coming to Japan for the 2019 Rugby World Cup.

Taylor, one of Wales’ most celebrated women rugby stars, won 67 caps for her country as a player. Last July, she made history by becoming the first female head coach in the Wales Rugby Union, taking the head post with the Colwyn Bay Rugby Football Club, where she began her rugby journey at age eight. She also provides coaching assistance to schools to further encourage children.