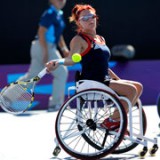 Jordanne Whiley became the first British woman to earn the trophy, with her partner Yui Kamiji.

Both players were Wimbledon runners up, and edged a doubles pair from Germany and South Africa in their final match in Mission Viejo.

Whiley and Kamiji will also compete together in the Australian Open in January.