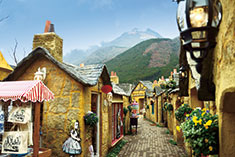 A hamlet on Japan’s third-largest island has been modelled in the image of the Cotswolds, Japan Today reported on April 21.

Yufuin Floral Village was opened by a local proprietor in November 2012. The buildings in the development were designed to look like those in the Cotswolds, an area with charm that led to it be chosen as a set for several Harry Potter films.

Although the Kyushu town is quite small, it features manicured English gardens, a Peter Rabbit petting zoo, as well as several small shops and restaurants with quaint, cottage-like storefronts.

There’s even a small inn for those who want to maintain the fantasy for longer than one afternoon.