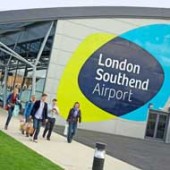 Southend Airport is a successful example of a public–private partnership.

A representative of the research think-tank went to the UK following the passage of legislation allowing the privatisation of state-owned airports in Japan.

Shingo Mochimaru was dispatched by the central government and briefed the Ministry of Land, Infrastructure, Transport and Tourism on his return to Tokyo.

The Essex airport was recently named the Best in Britain by the consumer magazine Which?.