A look at the pivotal year when the world changed dramatically 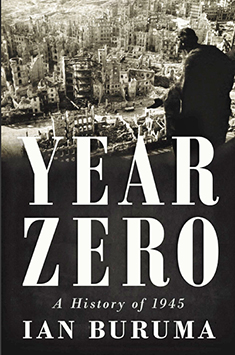 I have long been an admirer of Ian Buruma’s writing. Aside from his considerable journalistic output for such publications as The New York Times, The New Yorker, and The New York Review of Books, he has authored an impressive backlist of books that covers an equally impressive range.

One thinks of The China Lover, Murder in Amsterdam and Taming the Gods in particular.

The books cover subjects that are very different, yet each rings with Buruma’s distinctive voice; one that is compassionate and authoritative. Arresting and engrossing, as all of these volumes are, it is hard not to feel that the work under review is the book Buruma was born to write.

Luce Professor of Democracy, Human Rights, and Journalism at Bard College in New York, Buruma was born in the Netherlands to a Dutch father and a British mother. He studied Chinese literature and Japanese film and his exposure to both the European and Asian cultures informs his writing on every page.

The year 1945 marked the official end of the Second World War. It was a pivotal year that marked the collapse of one world and the beginning of an uncertain new one.

Cities across the world, from Berlin to Tokyo, lay in ruins. The people in those cities—and many more like them—were starving and displaced; whole populations were decimated.

In a series of carefully paced and beautifully written chapters, Buruma explores exactly what the events of 1945 brought about: for example, the creation of the United Nations, the European Union and Japanese pacifism. Here is his take on the Supreme Commander for the Allied Powers Directive of 15 December 1945:

“Ordering Emperor Hirohito to announce on the radio that he was a human being like everyone else did not seem like such a bad idea … What the emperor actually said was that his ties with the Japanese people were not ‘predicated on the false conception that the emperor is divine’.

“This satisfied the Americans. Most Japanese were hardly surprised by the statement, since they never doubted his humanity. But they saw him as a ruler descended from the Sun Goddess, something he never repudiated. In any case, few Japanese seem to have cared much one way or another”.

But this is no dry re-telling of history. Woven through the meticulously researched chapters that embrace the entire theatre of war is a deeply personal story. Buruma’s father fell victim to the Nazis during the occupation of the Netherlands, and remarkably survived the ordeal of being in a Berlin labour camp.

In a moving epilogue, Buruma recounts a visit with his father to Berlin in 1989 to witness the fall of the Berlin Wall. He is prompted to ask whether 1945 really was the end of the war, or whether it was actually 1989.

“With the fall of the Soviet Empire, there was hope that the gash running through the spine of Europe might heal at last. More than that: hope that the world would finally come together briefly flickered again in that miraculous year [1989], despite what happened in China in June … Now there was only one Big Power left. There was talk of a new world order, even the end of history”.