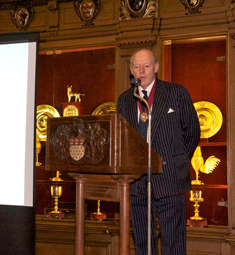 
Four centuries after the first diplomatic mission from the UK set foot in Japan, the two nations are marking 400 years of trading, diplomatic, scientific and cultural relations with a series of events that celebrate the mutual regard and friendship between the two societies.

The initiative has been undertaken by a number of professionals—from the worlds of business, media, academe, cultural diplomacy and public life—as well as a remarkable team of young British and Japanese volunteer helpers.

The Media Group, organisers of the festival, is chaired by William Horsley, the former chief correspondent of the BBC in Japan, and now UK chairman of the Association of European Journalists.

The Japan400 festival got under way in London at the end of January with the opening night of Anjin: The Shogun and the English Samurai at Sadler’s Wells Theatre.

The play tells the true story of William Adams, a sailor from Kent who is believed to be the first Englishman to arrive in Japan, and his friendship with Tokugawa Ieyasu. Adams was shipwrecked in 1600 off what is today Oita Prefecture, but rose to become one of the shogun’s most trusted advisers. As a minor samurai, he was given the moniker of Anjin (pilot) as well as an estate near Yokosuka in Kanagawa Prefecture.

Thirteen years later, Adams acted as guide and go-between for the first English diplomatic mission when it arrived aboard the Clove, an East India Company ship that had left England in January, 1611.

The Clove reached the island of Hirado on 11 June, 1613, with its commander John Saris, who had official letters and gifts from King James I for the shogun.

The gifts included a telescope—which had only been invented in 1608 and was the first in East Asia—as well as an item described as “a burning glass”, believed to have been a device used to set light to items using a lens, and vast amounts of cloth. The gifts were valued at about £150—a remarkable sum in the day.

In return, the shogun presented Saris with two suits of armour for King James, while his father, the all-powerful former shogun Tokugawa Ieyasu, presented the delegation with 10 spectacularly painted gold screens, a personal letter to the king and a shuinjo, an official letter bearing a vermilion seal, that granted the English permission to live and trade throughout Japan.

The letter from Ieyasu to the king included the words: “Though separated by ten-thousand leagues of clouds and waves, our territories are, as it were, close to each other. Send your subjects to any part or port of my dominions. They shall be most welcome”.

“This is a very interesting story”, said Professor David Cope, former director of the Parliamentary Office of Science and Technology and a member of the Advisory Council for Japan400.

“The Portuguese and Spanish had already come to this part of the world ahead of the English, in part because we had gone for the attractions of more tropical areas and the Americas, in particular”, said Cope, who took up a post at Doshisha University’s Institute for Technology, Enterprise and Competitiveness in February.

England’s other rivals in the region were the Dutch.

“We were also motivated by the hope of finding the North-East Passage to China and Japan without going past Portuguese or Spanish territory”, he said. “Of course, the English did not succeed in that, but they were probing”.

The other aims of the UK government were to promote trade and secure silver from the mines in Shimane Prefecture—one of the most important sources of the precious metal in the world at the time—and to buy spices in Java.

One of the suits of armour presented to James I is still in the Tower of London—the other is in Leeds’ Royal Armouries museum. It is recorded that the king treasured his presents, although he never believed all the tales he heard of the “strange country on the other side of the planet”, fearing they were “the loudest lies”.

Unfortunately, the gifts that were presented to the shogun have gone missing without a trace.

The British set up a trading station on Hirado, where profits for the East India Company from Japan were not as expected, thus the money that was to be made in the spice trade seduced trading firms’ executives. As a consequence, the trading station was wound up in 1623, although “there were pledges of eternal friendship”, Cope said.

“Another dimension is that soon after [the withdrawal of the East India Company], Charles I became king, and England started on the path to civil war, meaning that everything became focused inwards, which was a great pity”, he added. “We can speculate as to what might have happened in Japan–British relations, and so much sooner, if [the civil war] had not happened and Britain had been at peace”.

Other events to mark the anniversary have already included a gala launch party at London’s historic Skinners’ Hall, attended by the Lord Mayor of London and Their Royal Highnesses The Duke and Duchess of Gloucester, with the duke attending in his capacity as patron of the Japan Society.

Noriyuki Shikata, the political minister of the Embassy of Japan in the UK, spoke at the reception and pointed out that the anniversary also marks 150 years since the arrival of the Choshu Five in London.

“On their return, these men played some of the most important roles in the establishment of a newly industrialised, modern Japan.
“I studied abroad in the United States”, he added. “I cannot help thinking now that, in order to climb to the top of the career ladder, I should have made the choice to come to university in this country”.

Appropriately, the opening event was sponsored by the present-day East India Company, which still trades with Japan in fine foods and teas.

The duke and Shikata proposed toasts to the quatercentenary of Japan–British relations with the best sake from Hirado, generously sent by the mayor of Hirado and the island’s top two sake breweries.

In a historical briefing, Professor Timon Screech, Japan400’s co-chairman and head of the School of Arts, SOAS, University of London, told the 200 guests many colourful stories about the initiative by the king and the East India Company in 1613.

In another speech, Co-chairman Nicolas Maclean, who is also initiator of the UK model for what is now the JET Programme, thanked the scheme’s many British and Japanese supporters—including British Airways, the City of London, Chugai Pharmaceutical Co., Ltd., Hitachi Europe Ltd., HoriPro Inc, Fujisankei Communications International, Inc. and the Great Britain Sasakawa Foundation—and volunteers.

As a mark of the enthusiasm for Japan400, he mentioned that the website, launched on 10 January, is receiving more than 1,000 hits per day.

Maclean also mentioned historic commemorations that will take place in Japan in Hirado, Usuki, Yokosuka, Ito and Shizuoka, with more still to be announced. He added that the two sides “are not just remembering the past”.

“Through the events of this year, we are celebrating the strength of today’s bilateral relationship in a variety of fields: [not just] trade, investment and finance, but also science, education and the arts”, he said. “We are building a firm foundation for future partnerships”.

Screech and Maclean then painted in one eye of a traditional Japanese daruma doll for good luck. The website will highlight many events and initiatives before the second eye is painted in at the end of the year.