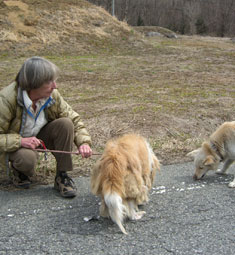 In the year following the Great Hanshin Earthquake (1995), Animal Refuge Kansai (ARK) took in 600 animals: dogs, cats, rabbits and birds. Everyone thought we would never again experience such a calamity, but we were wrong.

On 11 March 2011, a more devastating triple disaster struck. This time, it was the Tohoku region. People were evacuated and left everything behind—their valuables, documents and pets—thinking it would only be for a few days.

The latter group died a lingering and painful death from starvation and dehydration. On farms, horses, cattle, pigs and chickens suffered the same fate. Animals being left without food or water represent a man-made catastrophe.

Just after the Tohoku disaster, ARK could move freely around the area and rescue animals. However, over time, a 20km no-go zone was set around the stricken Dai-ichi Nuclear Power Plant, and our staff were threatened with arrest if they tried to enter.

As predicted, the surviving dogs and cats within the 20km zone bred thousands of feral animals that the local government would have to deal with in due course, another tragedy that could have been prevented.

ARK was able to rescue about 200 animals, mostly dogs, which were transported to our Osaka shelter via Tokyo, no small logistical challenge.

Within a few days, these animals were health-checked, blood-tested, vaccinated, micro-chipped and neutered. Photos of the pets with details of where they were found were posted on our homepage and on other sites set up to reunite pets with their owners. In some cases, a happy reunion was possible.

However, even now, three years on, many families still live in temporary housing. Some have given up hope of living with their pets again and have given us permission to find new homes for their animals.

Others still cling to the prospect of a reunion.

Eleven dogs rescued from the Tohoku region are still at ARK, and we have promised their owners that we will care for them as long as it takes.

Our new kennel in Sasayama, Hyogo Prefecture, is nearly ready, and it is fitting that the first dogs to occupy it should be those from Tohoku. But however comfortable this facility will be, nothing can replace the love of a family and the security of their own homes.