Animal Refuge Kansai (ARK) combined its annual reunion with a party on 28 May to mark the opening of its latest kennel block, with representatives of Dogs Trust UK on hand to witness how their advice and support is being put to use there.

Seven years after ARK founder Elizabeth Oliver MBE purchased just over two hectares of land in a natural bend in the Shitsukawa River on the wooded outskirts of the hamlet of Shitsukawa Shimo Aza in Osaka Prefecture, ARK’s Sasayama sanctuary has grown into arguably the best in the country. 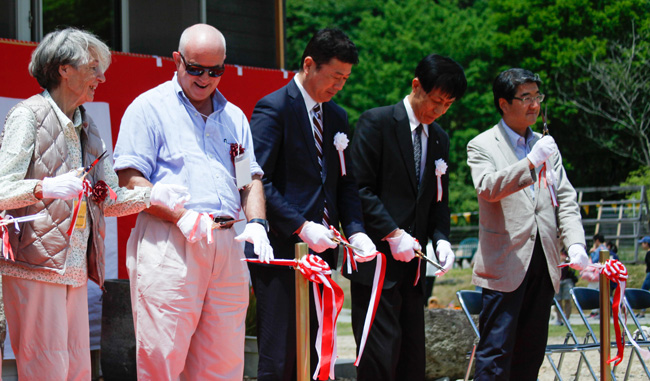 On 20 May, 17 dogs moved into the newest kennel block, built to complement the first kennels for 29 dogs, which was opened in 2014. There are also facilities for a number of other unwanted pets, including cats and rabbits, while residents in the past have included goats, pigs, ducks, tanuki (Japanese raccoon dogs) and silver foxes.

And while 76-year-old Oliver was delighted at the turn out—close to 100 re-homed dogs and their new owners visited for the day—she admits that the problem of pets being abandoned is not going away and that much work remains to be done.

“Both in Japan and the UK, changes in peoples’ personal situations—divorce, bankruptcy, death—are causing them to have to give up their pet”, she told BCCJ ACUMEN. “The difference is that, whereas in the UK there are many organisations able to take these pets in, here in Japan there are very few, so there is no safety net”.

Local authorities have also become wary of putting down pets that residents no longer are able to care for, and stray animals. In the case of pets, they have started recommending that owners contact ARK.

“Unfortunately, a lot of [the referrals] are of older animals given up by their elderly owners due to ill health or death, which means ARK is getting full of older animals, which are more difficult to re-home and are also costly to care for”, Oliver added. 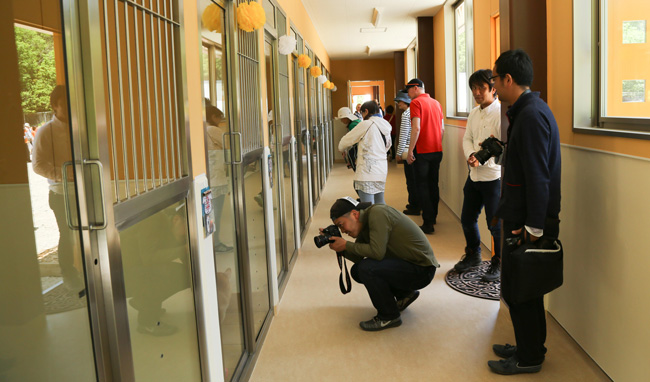 Pets are also very susceptible to trends in Japan.

“We call them pets that are the flavour of the month”, she said. “Apricot poodles are everywhere right now; two years ago it was dachshunds.

“Given the small living spaces in Japan, small dogs are inevitably popular, but we are also seeing a trend of older people—who are living longer and are active into their seventies—of wanting a dog to take for a walk”, she pointed out.

Unfortunately, they make the mistake of buying a puppy from a pet shop. And a few years later, when they are less physically able, they have a full-grown and energetic dog to take care of.

“If those people had come to ARK in the first place, we would have recommended an older dog—easier to keep, size and character known, training unnecessary—rather than a puppy”, she said.

Despite the latest additions at the Sasayama site, Oliver says she has many more plans.

“There is still a long way to go”, she said. “We need an education building where we can hold training for dogs on rainy days and that can double as two rooms for seminars, symposiums and so on, because I believe the future is in education. 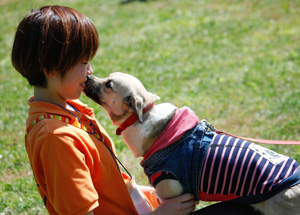 “We also need to build a reception building that will include a clinic, as well as a library where children can study about the wildlife around the site.

“Moreover, we are considering running courses for kids at schools, based on the Dogs Trust manual Staying Safe Around Dogs”, she said. “We would start with international schools—we have around 10 contacts within Kansai and Kanto—and then move onto Japanese schools”.

UK support
The Dogs Trust Worldwide has been supportive of Oliver’s projects for many years, with managers and behaviour experts from the London-based charity visiting ARK—which was originally set up in a valley above the nearby town of Nose, where it still has a facility—to offer advice on training individual dogs with specific challenges. Two more trainers visited Japan earlier this year as part of the organisation’s international activities.

Adrian Burder, chief executive officer of the trust, said the Sasayama refuge is among the best he has ever seen.

“The facilities are absolutely stunning”, he said. “The location and housing units are among the best I have seen anywhere in the world, and the quality of the build is extraordinary.

“We are very proud to have been able to play a small part in this project, but we know that Elizabeth still has big plans and we are keen to be a part of that moving forward”, he added.

ARK’s Sasakawa project is being used as a flagship for other similar organisations around the world, Burder said, in order to showcase what can be achieved.

“Something like this helps to raise the status of dogs in societies”, he added.

The hurdles, however, invariably come back to finances, Oliver admits.

“Since there are now many smaller groups rescuing animals in Japan, people see our new facility and think we must have enough money so they donate to less well-off groups”, she said.

“Our running costs are high, especially staff salaries, but since we believe in giving our animals the highest level of care, the animal ratio is around 15 or 16 to one”, she said. “This means that they not only take care of routine things—the cleaning, feeding, walking—but also have time for playing with dogs and socialising them”.

Donations covered around 70% of the ¥90mn cost of the new kennel block, but Oliver says ARK needs to come up with new ways of generating income rather than simply relying on donations.

“There are several ‘business’ ideas we can consider: one is to build a memorial garden in Sasayama where the cremated remains of people’s pets can be laid to rest”, she said. “Another is to board dogs as many foreigners in the Kobe area go away for a long vacation, while another idea is to lease our Dogland area to other groups to hold their own events, or just let their dogs play there”.

In July 2000, Elizabeth Oliver MBE led the ARK team in dealing with a serious issue involving a female hoarder. The woman in question lived alone with more than 100 dogs in squalid conditions.

After speaking with the woman, ARK was able to take away six of the dogs for neutering. However, they had to return the dogs to her when faced with the woman’s unstable condition—she threatened to burn down the ARK facility. This is when Oliver realised how volatile hoarders can be.

They managed to rescue one puppy, named Gachan, who is now 17 years old and lives in the ARK office.

However, the situation was not over and Oliver never gave up on the other dogs. A few years later, when the woman was in prison for a traffic violation, ARK was able to have all the dogs signed over for neutering.

Seventeen years later on 6 March, a call from Tamba Hokensho explained that a fire had killed the hoarder and many of the dogs. Over the following two days, Oliver and the ARK team were able to rescue four dogs—DWEF (meaning Dog Which Escaped Fire), DWEF Too, Beacon and Flame—all of whom are available to go to a loving home that can take them.

Oliver’s persistence meant that she was able to close a case that could have been a lost cause.