Climate change is one of the biggest worries of this generation. Rising temperatures and disrupted weather patterns impact not just the lives of individuals but also the health of business. The average global temperature in 2018 was the fourth-highest on record and just the latest hot spot in a trend that has seen a rise of more than one degree since the late 19th century. While efforts are being made to address the problem, the pace is too slow. 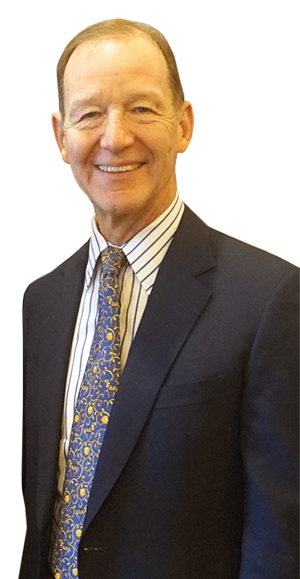 At the breakfast session held at the Shangri-La Hotel, Tokyo, Roosevelt, who is managing director for investment banking at British multinational investment bank Barclays in New York City, spoke about the real threat that climate change poses to the planet and the global economy, as well as how Barclays has been shaping the world of sustainable finance.

Previous financial models that have been used by investors, financial institutions, economists and risk managers have, according to Roosevelt, stopped working. Models such as the Phillips curve, price-to-earnings ratio and purchasing power parity have become outdated, and their use futile.

“One [area] that really needs to change drama­­tically are the models used by the insurance indus­tries,” he said. “You often hear the insurance industry say that a storm is a 100-year event. That assumes that each 100-year period will be exactly like the prior. They assume it’s going to be completely stable. If you look at the good city of Houston, Texas, in the past two years they had a 1-in-500-year event. I think that suggests the model no longer works”.

Scientists began predicting rising sea levels in the 1970s, he said, adding, “If anything, climate models have underestimated the risk”.

Climate change, which is the prolonged shift in the Earth’s temperature, is causing freak weather, rising sea levels and the destruction of various ecosystems. Many studies have found that human activity plays a large role, suggesting that the crisis can only be dealt with by changing the way we live.

“For the past 10,000 years, we have lived in a period of unusual climate stability, which has enabled the development of agriculture, allowed us to build cities and we became rich,” Roosevelt said. He pointed out that the CO2 levels in the atmos­phere correlate with the increase in the average global temperature.

Roosevelt pointed out the importance of the West Antarctic Ice Sheet, the Greenland Ice Sheet, the Palearctic permafrost and the Tibetan Plateau, which is also known as the Third Pole. “These are areas where we are going to see climate change occur relatively rapidly,” he said, “and the implications will be dramatic”.

Permafrost is ground that has remained frozen for at least two consecutive years. Using a chart, Roosevelt demonstrated areas where rising temperatures were most prominent, emphasising the danger this poses to the permafrost if the ground continues to melt. “We can’t estimate how much methane is going to be released [and] at what speed, but we do know it is going to have an impact. Methane is 100 times more potent as a greenhouse gas than CO2”.

One area that doesn’t get the kind of attention it should is the Tibetan Plateau, or the Himalayas, he said. The area is important because it is the source of most of Asia’s rivers. These run from the plateau and, as temperatures rise, their flow will change. The Yellow, Yangzi and Ganges Rivers—among others—cut a path through countries with high populations. Increased flow will cause flooding, affect farming and disrupt communities. This will not only impact residents, but also each country’s economy.

“Most people think that India is going to continue 3.5–4% GDP growth. But if [changes to] the Third Pole happen … it’s going to become too hot and it’s going to impact agriculture, migration and human health”.

According to graphs shared by Roosevelt, it is predicted that 49% of all electricity generation will come from fossil fuels by 2040. “That being the case, we are not limiting emissions fast enough. We need to put policies in place that are going to accelerate that change. That is one of the things that I think green finance can help us do,” he said.

“We need government policies which, among other things, will attempt to address what I call ‘climate inequity’”. The countries of the Organisation for Economic Co-operation and Development, he pointed out, are responsible for a large percentage of the greenhouse gases that have already accu­mulated in the atmosphere. “We have a moral obligation to help the developing [world] get access to reliable and competitively priced energy, but it can’t be coal fired— because we are all on a boat, and it is going to sink”.

One change that Roosevelt feels is needed, and which will require the cooperation of governments, is a standardisation of cost. “We need to put a price on carbon that, globally, is largely the same. Not every country has to do it the same way, but we want to see the price of carbon roughly the same in the US as it would be in Europe and China, so that there is a clear financial incentive to move away from the carbon-intensive industries,” he explained. “This will provide revenues for investment and infrastructure, and revenues for more research and development”. 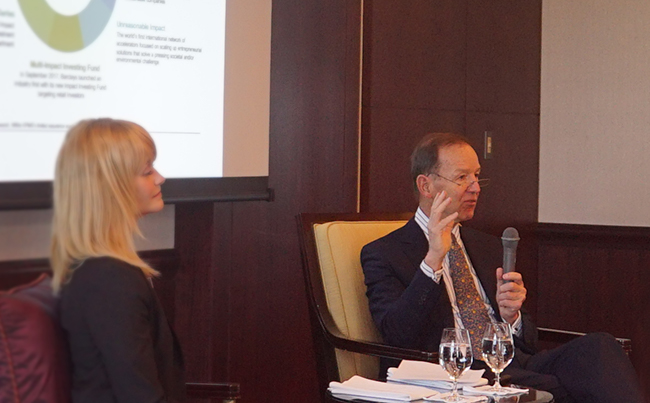 “Internally, we are making changes within Barclays so we can have the kind of intellectual conversations that will hopefully make us a leader,” Roosevelt said. The firm has multiple proactive focuses that are pushing it to the forefront of sustainable finance.

The Barclays Green Banking Council first convened in January 2017, with the objective of establishing Barclays’ leadership in green finance through innovative products designed to support their clients’ transition to a low-carbon future. Also launched in 2017 is the Green Loan, a term-lending product where proceeds of the loan are used exclusively for eligible green projects, as defined by the Barclays Green Product Framework.

In November 2017, Barclays issued a €500mn green bond—the first from a UK bank—using UK assets (residential mortgages). Their investment bank helped clients issue more than £31.7bn of green financing and environmental, social and governance financing in 2017. Barclays is committed to the green bonds market as an investor, with one of the first and largest treasury green bond investment commitments, totalling £2bn.

Roosevelt highlighted many of the positive out­comes that might result if green finance is imple­mented, but the major takeaway from the event was the impact of human activity, the impor­tance of making responsible decisions and dedica­tion to getting the problem under control.

The younger generations, he said, are far more invested in making a change, and organisations now must prove that they are committed to turning the tide if they are to find young talent willing to join their firms. “The younger generation want to get on with it. If you’re not doing it, they don’t want to join you”.