The GSK Human Performance Lab (GSK HPL) is a state-of-the-art science facility based in West London, in the UK. It is owned and operated by GlaxoSmithKline plc—one of the world’s leading research-based pharmaceutical and healthcare firms.

The 1,672.25m2 facility has some of the UK’s most advanced sport technology, scientists, research and development capabilities under one roof. 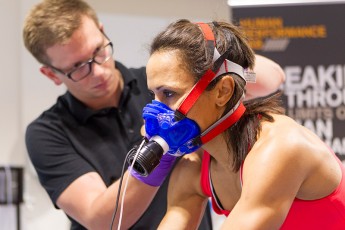 Its team work with performers—such as Jonathan and Alistair Brownlee who took medals at the London 2012 Olympic and Paralympic Games, the McLaren-Honda Formula 1 Team and world No. 1 golfer Rory McIlroy MBE—to help them break through their own limits.

The lab carries out research with these elite performers to better understand how their bodies and brains function.

GSK HPL scientists are then able to identify very specific areas for potential development, so partners can improve their training, recovery, nutrition and competition programmes.

In return, GSK has research and data from elite athletes that can help drive scientific innovation across its business.

Charles Leslie, global head of GSK HPL, said: “The GSK Human Performance Lab is very exciting, as both the GSK business and our elite partners benefit from its research.

“Our elite partners have a very detailed understanding of what can drive and improve their own performance, and the science behind their success will help us develop products that better meet the healthcare needs of consumers. Research the lab is carrying out will also contribute to R&D across the wider GSK business”.

Recent research includes protein strategies to optimise the impact on reducing the incidence and severity of muscle damage after exercise.

The lab’s neuroscience team have also been exploring the role that cognition plays in supporting readiness for performance, examining the athletic brain and the impact on it of nutrition and fatigue.

The lab’s work has not gone unnoticed. The Duchess of Cambridge, as patron of the charity SportsAid, visited the facility in November 2014 to see 30 young athletes aged 16–20 undergo testing.

This process was designed to help the athletes achieve their goal of competing in the Tokyo 2020 Olympic and Paralympic Games.

Tests in the lab’s environmental chamber were set to match the heat and humidity of a typical Tokyo summer. Scientists then provided extensive feedback to the athletes and their coaches, helping them develop improved nutrition, training and recovery programmes.

On the visit, the duchess took two cognitive tests—which measured her reaction times—to experience first-hand what the athletes had been doing. She also went into the environmental chamber to experience the conditions the athletes are likely to face during the Games. 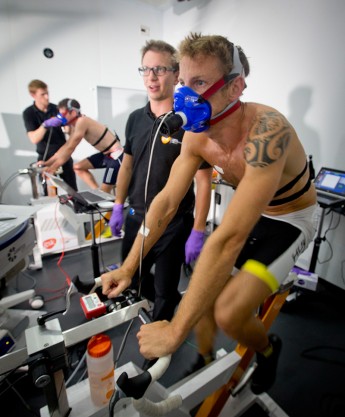 McLaren-Honda racing driver and triathlon devotee Jenson Button MBE recently took on one of the toughest challenges of his career in the GSK HPL—a head-to-head test with Jonathan and Alistair Brownlee.

Jenson, who trains and regularly competes in triathlons to stay fit for F1 events, was put through his paces in the lab in a series of triathlon and F1 tests to compare and contrast his physiological and cognitive performance with the Brownlee brothers.

Using GSK HPL cutting-edge science, Jenson and the Brownlees went head to head in a series of swimming, cycling and cognition tests under strict lab conditions.

The group also underwent skin and core temperature tests to assess how their bodies perform in the heat and humidity that Jenson experiences in the hottest Grand Prix of the F1 season (35˚C and 70% relative humidity).

The tests helped Jenson understand the ways in which he can improve in the triathlon, and are helping the Brownlees acclimatise to the heat and humidity they are likely to experience during the Rio 2016 Olympic and Paralympic Games.

Dr. Ken van Someren, head of R&D at the GSK HPL said: “The research with the Brownlees and Jenson was about showing the interesting physiological and cognitive differences between a group of world-class athletes from very different sports.

“Both McLaren and the Brownlees are GSK HPL research partners. We support McLaren with nutrition strategies, and wide ranging physiological and cognitive assessments to help improve race team and driver performance.

“We are delivering in-depth research for the Brownlees and the British Triathlon Federation that focuses on acclimatisation to support their preparations for Rio 2016”.