A very warm welcome to the first in our series that will run throughout the year on the rich and varied history of the British Chamber of Commerce in Japan (BCCJ).

Every issue this year will celebrate specific chapters, milestones, industries and the people fundamental to the BCCJ during the 70 years since it was formed.

Since the middle of 2017, we have searched for records of the people and events behind the BCCJ. Unfortunately, we soon learnt that important official papers, which could have shed light on this subject, had mysteriously vanished from the BCCJ office several decades ago. We are still searching for them.

The untimely death in December 2017 of the BCCJ’s longest-serving executive director, Ian de Stains OBE, further set back this chall­eng­ing project, as he had been set to play a key role in producing the series.

However, we start with a two-part intro­duction to the BCCJ produced by de Stains and commissioned by former British Ambassador to Japan (1980–1984) Sir Hugh Cortazzi GCMG, who compiled and edited Britain & Japan: Biographical Portraits Volume X, published in 2016 by Renaissance Books. 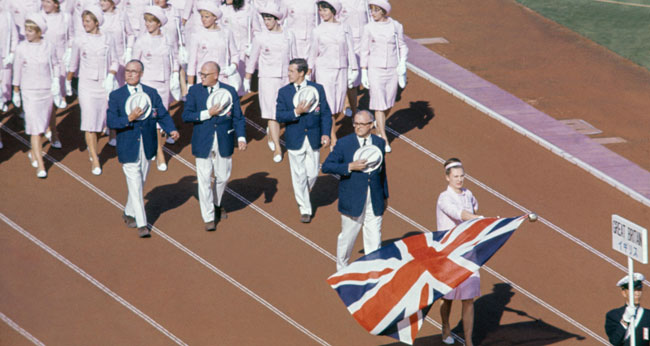 Team GB at the opening of the 1964 Tokyo Olympic Games.

I would like to sincerely thank Sir Hugh and the Japan Society in London, which owns the copyright, for generously granting us permission to reproduce this revealing essay, and for their valuable advice and keen support in our project.

The early years
Early in 1948, a handful of British businessmen—post-war pioneers—met in Tokyo to discuss ways in which they might help each other take advantage of the obvious business opportunities that peace and the Occupation afforded. Among them were the late William Salter and the late Douglas Kenrick, two men who essentially spawned the idea of creating a British Chamber of Commerce in Japan.

Although founded in 1948, it wasn’t until 1955 that what was then the Ministry of Trade and Industry (MITI) permitted the use of the name British Chamber of Commerce in Japan (BCCJ). This granted the organisation Foreign Juridical Person status under Article 36 of the Civil Code. The Treaty of Commerce, Establishment and Navigation between Japan and the UK ratified that status in 1963. Only then did the chamber set up a permanent secretariat, which was initially manned by a volunteer. 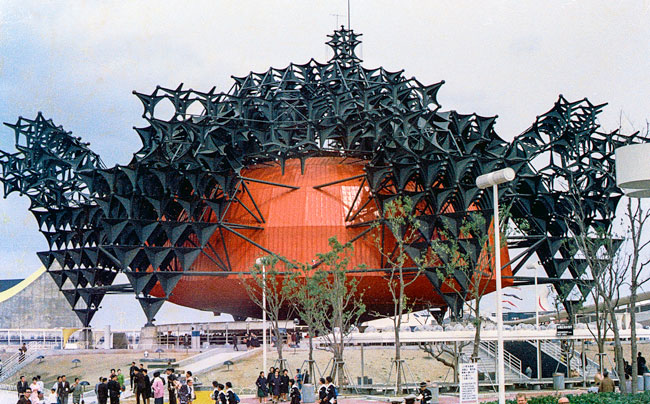 The Toshiba-IHI Pavilion at Expo ’70 in Osaka, which showcased British achievements.

Olympics and the Expo
Hugh Cortazzi, who was commercial counsellor in the British embassy from 1966 to 1970, recalls that he tried to attend all the main meetings of the executive committee of the chamber (as his predecessor Colin Harris had done). If he could not do so, either John Whitehead or Alan Harvey, first secretaries (commercial), would represent the embassy.

Hugh Cortazzi writes: “Our aim was to ensure that British companies were briefed on the trade promotion activities of the embassy and our efforts to prise open the Japanese market. Bill Salter, who acted as secretary, was at that time one of the few British businessmen who was fluent in Japanese. We helped as much as we could, even sometimes drafting the minutes of meetings. We planned a major trade promotion British Week in Tokyo in 1969 and when Ben Thorne was appointed as head of the British Week office he worked hard with members of the chamber to engage British companies in backing our efforts.

“The chamber elected Duncan Fraser as its chairman during the run-up to British Week, who represented Rolls Royce and who galvanized the enthusiastic support of the British business community in Japan”.

Sadly, much of the chamber’s early archive was lost during a move, so we can only speculate about what issues dominate the early proceedings of the chamber. It would be fascinating to know, for example, what the BCCJ’s position was with regard to the 1964 Tokyo Olympics, which was a catalyst for the rapid development of the capital.

A similar effect is expected as a result of Tokyo having won its bid for the 2020 Olympic and Paralympic Games, which should generate renewed investment and growth in the nation.

The British Week, with the backing of the BCCJ and its members, was a success. But this was not intended by the embassy or members of the chamber to be a one-off event. Expo ’70 in Osaka attracted many visitors from Britain, including the Prince of Wales on his first trip to Japan, and the British pavilion showcased some British achievements, but this was not a trade show. The embassy and the chamber were determined to keep up the impetus and show that Japanese accusations that British business was not trying hard enough were unjustified.

Boosting exports
An important step in the promotion of British exports was the establishment of the British Export Marketing Centre (BEMC) in Aoyama 1-chome. Peter Wakefield succeeded Hugh Cortazzi as commercial counsellor in the rank of commercial minister.

When he returned to London to run the official campaign to promote exports to Japan, Ben Thorne, who had returned to Japan as director of the BEMC, became commercial counsellor. In both capacities Ben Thorne worked closely with the chamber, having been co-opted on to the chamber’s executive committee. Mrs Kazuko Kon, who spent her entire career with the British embassy in Tokyo, has commented:

“The BCCJ and the commercial section of the embassy were always extremely close. The BEMC was also a key partner. I have happy memories of our collaboration on such things as the Opportunity Japan, Priority Japan and Action Japan campaigns that ran through the nineties. 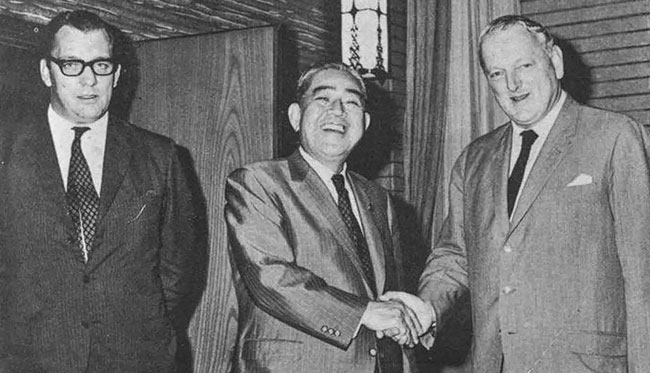 Martin Barrow, who for many years headed Jardines in Japan, was president of the chamber from 1979 to 1980 and he, too, remembers the close connection with the embassy:

“Of course we had very good connections. But at the time we had few links with the relevant people in the Japanese government—with MITI, the [Ministry of Foreign Affairs], the Ministry of Finance, and so on. So we set out to build those links, as at the time there remained several barriers to trade and investment that we needed to bring to their attention”.

All the British ambassadors in Tokyo and their staff responsible for commercial and economic work have consistently given high priority to working closely with the chamber and its members.

Trading Places
The BCCJ’s chairman was usually the head of a major British firm in Japan. Trading firms such as Jardines, Swire, Dodwell’s and Cornes were always active members of the chamber, the heads of these and other firms taking it in turns to act as chairman of the chamber. Among these were Graham McCallum of Swire, Lew Radbourne of Dodwell’s and Martin Barrow of Jardines.

Meanwhile, some chairmen were representatives of industrial firms, such as Norman Macleod of ICI, and the executive committee reflected the then-makeup of the British commercial community, which included senior expatriate managers from major banks, accountancy firms, traders, as well as from heavy industry, including BSC, Wiggins Teape and Beechams.

Until responsibility for trade relations passed to the European Economic Community (later the European Union), negotiations on trade issues with Japan had to be negotiated by the Department of Trade in London and the embassy. Issues that closely affected British firms, and consequently members of the chamber, included the various quotas and restrictions imposed by the Japanese government.

The problems faced by Scotch whisky in the Japanese market was one in which members of the chamber were closely involved.

The chamber of the 1970s and early 1980s was as much a social grouping as a centre of expertise and lobbying on trade and investment issues. It held regular lunches at which distinguished visitors—ministers and senior officials, both Japanese as well as British—would address large audiences. The economic climate was difficult in the aftermath of the first and second oil shocks, while the Japanese government continued to rely on voluntary trade restraint arrangements with trading partners to rein in exports in sensitive sectors, as well as discriminatory tariffs on imports of scotch whisky and confectionery.

There was constant tension between the embassy—seeking to encourage British firms to be more active and aggressive in a market which, while difficult and expensive to exploit, was nonetheless significant and growing—and Whitehall, which wanted to take a tougher line on trade barriers and systemic Japanese trade surpluses.

The chamber, which for the most part comprised firms who had taken the plunge and understood the Japanese market, played an important role in helping to get these messages across, as well as in identifying areas where the British and Japanese governments could be more active.

Market entry
At the same time, the chamber and embassy working together played an equally significant part in helping newcomers to the Japanese market understand how business was done in Japan. Also made clear were the unique pressures of a market whose size and sophistication made it crucial for exporting firms seeking to become active on the world stage while, at the same time, requiring major investment in time and money, despite a lower level of return on equity than could be found in smaller, more accessible markets.

Throughout the 1980s, the chamber developed a valuable hand-holding role for new entrants to Japan. It was a time when the terms of trade began to turn more in favour of countries exporting to Japan, as a result of the Plaza Accord, the revaluation of the yen and the gradual elimination or amelioration of those tariff and non-tariff barriers that had inhibited business development.

During this period, the chamber went from strength to strength, with important figures such as Ray Giles, then of Beecham Group plc, playing a key role in the creation of what would eventually become today’s European Business Council (EBC). The year 1987 was particularly significant. The BCCJ Executive Committee made the decision to hire an executive director with a media and communications background.

At the same time, thanks to the generosity of Robin Maynard MBE, of Sedgwick Japan, the chamber was moved to a central location with improved office space and a large meeting room at its disposal.

For the first time, the chamber had a proper home. Maynard has commented:

“My enthusiastic support for the BCCJ was based on what is known in the treaty reinsurance business as a reciprocal trade. Particularly during my extended spell as the Lloyd’s of London general representative in Japan, speakers at chamber events delivered helpful new business concepts and direction sourced from outside the financial services sector. My reciprocity was to have successive Lloyd’s chairmen, who were no longer simply selected from the insurance and reinsurance market, lift the shrouds on the workings of the city”.

Don’t miss the March issue of BCCJ ACUMEN, in which we will present the second part of our introduction to the BCCJ. It will feature anecdotes and observations of Operations Manager Sanae Samata, the chamber’s longest-serving employee, who joined the staff in 1987.