A message of this kind would not be complete without a look back at a remarkable year for the UK and our Royal Family. Last year saw the Queen’s Diamond Jubilee, marking the 60th year of Her Majesty’s reign, which began when she succeeded her father, King George VI, in February 1952.

I remember, in 2002, while serving as one of the queen’s private secretaries, helping to organise her golden jubilee. It was wonderful to see the nation and the commonwealth rising to the occasion once more (and knowing that this time I could just sit back and enjoy it!).

Many people found the celebrations a fitting tribute to Her Majesty, whose keen sense of duty and absolute commitment to her responsibilities have rightly won her the admiration of millions around the world.

She is, so far, our second longest-serving sovereign. When she came to the throne in 1952, her first prime minister (of the 12 who have served during her reign) was Sir Winston Churchill.

She is, of course, also the queen of 15 commonwealth states—all of which marked the anniversary in their own ways.

Japan took part in the celebrations, too. It was heartwarming to see the UK–Japan links strengthened further when the emperor and empress visited London for their jubilee state visit.

Following on from the visit, and the tremendous work done by a range of Britons in supporting the rebuilding of Tohoku (including distinguished contributions from members of the BCCJ), it was very good to see a plaque from the emperor unveiled last month at Holland Park’s Fukushima Gardens in London.

And then of course, sports fans’ eyes around the world focused on the UK last July, when the triumph and brilliance of the London 2012 Olympic and Paralympic Games presented not only a magnificent festival of sport, but also showcased the diversity of modern British life.

The enthusiasm, creativity and celebrations of 2012 are still resonating. The Games were designed to provide a lasting legacy for the Olympic Park’s host community of Stratford, East London—the most diverse in Europe, with over 300 languages spoken.

The park itself, which is the largest of its kind to open in Europe for generations, will this year become the Queen Elizabeth Olympic Park, providing new homes, parkland and sports facilities to the local communities for generations to come.

With an emphasis on sustainability, I have decided that the Queen’s Birthday Party celebrations at the British Embassy Tokyo later this month will follow the theme of Green is GREAT.

It will showcase UK excellence in low carbon growth and sustainability, as part of a wider three-year campaign we are running that invites the world to take a fresh look at everything Britain has to offer. The focus will be on areas of British excellence: technology and innovation, entrepreneurship, creativity, knowledge, green, heritage, sport, shopping, music and the countryside.

We want to send a clear message that Britain is one of the very best places in the world to visit, live, work, study, invest and do business.

Whilst in Fukuoka in March, I was struck by the young Japanese entrepreneurs—especially in the digital world—who are keen to learn from Britain’s digital expertise, and who signed a memorandum linking London’s Tech City in Old Street with the city of Fukuoka.

And change continues to amaze. Who would have thought, in the midst of The Troubles (1960s–1998), that the British government would choose to invite the leaders of the world’s top economies to Lough Erne, Northern Ireland. But that is exactly what is happening in June, when Prime Minister Shinzo Abe and seven other world leaders will once again travel to the UK, to attend the 2013 G8 Summit in Northern Ireland. The rich ironies of history.

Because Japan and Britain’s history goes back so far, and is so deep, there are few years that don’t mark a significant milestone.

However, this year marks the 400th anniversary since the presentation of credentials from King James I to Tokugawa Ieyasu, the first Tokugawa shogun of Japan—when our trading relationships first started. The letter is still at the Bodleian Library in Oxford.

This year also marks the 150th anniversary of the visit to the UK by the Choshu Five, the young warriors who broke Japanese law by travelling on a British vessel to the UK, and who studied at University College London. They later returned to Japan to become the first generation of Meiji political and industrial leaders.

Events to celebrate both these anniversaries will be taking place here and in the UK over the summer and autumn.

Hard work and dedication makes anything possible, and Her Majesty embodies these values, which both our countries share. 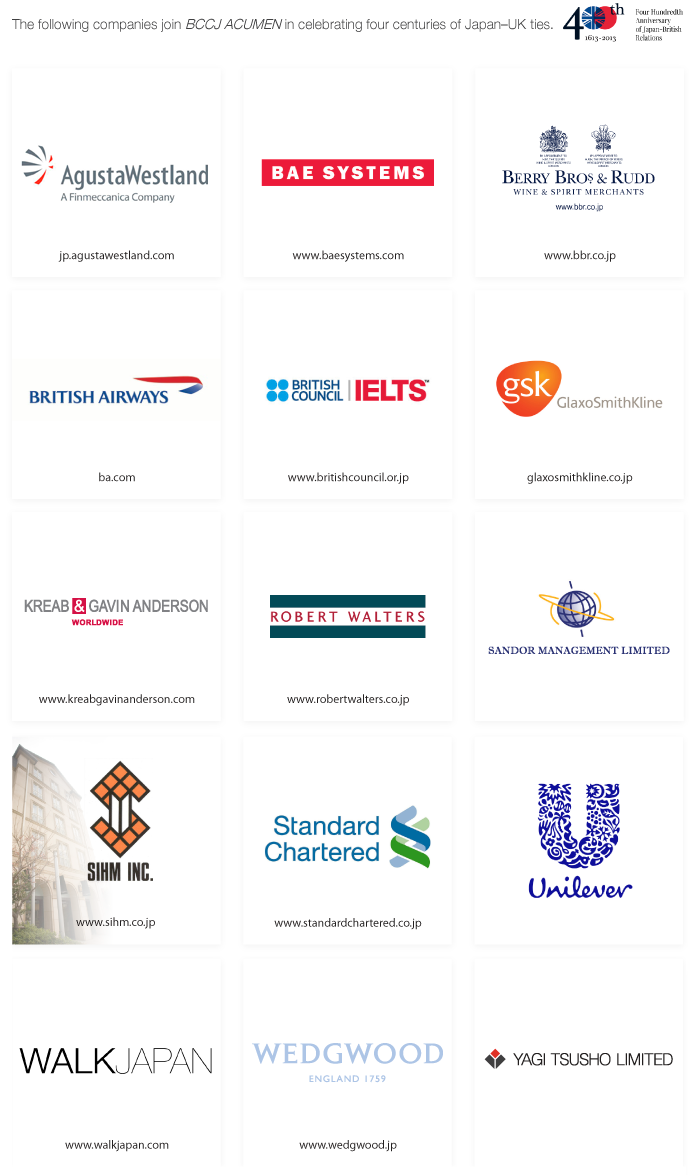