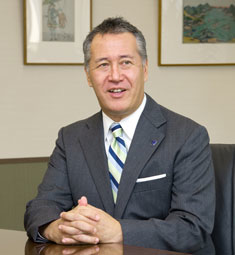 Danny Risberg is chairman of the EBC’s Medical Equipment Committee.

The first health policy white paper to be jointly compiled by the European Business Council in Japan (EBC) and the American Chamber of Commerce in Japan (ACCJ) has made numerous recommendations—156 across 36 topic sections—on improvements in healthcare here.

Significantly, the authors of the report, Lengthening Healthy Lifespans To Boost Economic Growth, points out that wellness among the general population is not simply a question of the health of the public.

Increasingly, wellness is linked to the fundamental economic health of the nation at large, they emphasised.

Despite major improvements in Japan’s healthcare over recent years, the experts agreed that plenty of enhancements remain that could help people live longer, healthier and more productive lives.

“We have met different challenges depending on products, such as the well-documented time lag [that exists] here in the approval of drugs, diagnostics and devices”, said William Bishop, director of corporate affairs for Nippon Becton Dickinson Co., Ltd (BD Japan) and chair of the ACCJ Healthcare Committee.

“But there have been changes. The time lag has definitely been shortened and the Japanese authorities have provided the funding and manpower to carry out reviews more speedily, meaning that approvals are coming sooner”, Bishop explained.

As well as cutting the time lag—from an average of 22 months in 2009 to 11 months today—a change in the vaccine law here has brought more drugs to market quicker, and funding has been continuous for an anti-cancer initiative that was started in 2009.

“There has been a shift towards a prevention paradigm in the last five years or so in Japan, with the recognition that prevention is important”, he said. “Because of this, there has been a move away from a system that provides acute care to one that is driven by a rapidly ageing population and the need to address chronic diseases and their management”.

“The cost of medical care is continuing to grow for the Japanese government and for the country’s population. Everyone is worried about this; not only the government but businesses as well”, Risberg said.

“We have been asking for stuff for years, but there has now been a realisation about the ageing of society on the part of the Japanese government and they are now aware that things really are changing”.

With Prime Minister Shinzo Abe so keen to breathe new life into the national economy, the medical sector is one obvious place where reforms—as well as planned free-trade agreements with the European Union and the US—can reap a sizeable benefit.

According to the white paper, disease costs the Japanese economy ¥3.3trn in lost productivity per year, while a shift to prevention and early detection would increase healthy life spans, lower the economic burden of disease, and support economic growth.

The report points out that, while Japan is famous for having the world’s longest life expectancy, the last 9.2 years of a Japanese man’s average 79.6 years currently require medical and nursing expenses. For women, the last 12.8 years of their average 86.4-year lifespan similarly requires care and assistance.

The white paper further underlines the point made by the World Health Organization that every one-year increase in life expectancy is linked to a 4.3% increase in global GDP.

The recommendations in the report are not ranked in order of importance, However, the authors point out that there are several fairly straightforward measures that could be taken quickly and would have an immediate, beneficial impact.

“A shift to an early treatment model has already been proven to be the most effective way to approach disease, and right in the front of this would be smoking cessation”, said Bishop. “This alone would give you a good bang for your buck, although I accept that it’s difficult.

“Funding for the fight against cancer is already there, the cancers have already been largely identified, and there is a well-funded campaign in place”, he added.

The goal is to identify cancer early but, despite high public awareness of the most common variants of the disease—cervical, breast and colon cancer—screening rates have remained “stubbornly low”, said Bruce Ellsworth, director of government affairs for Japan at Johnson & Johnson K.K.

“Cancer screenings are not always included in company medical checks, so they require a separate trip to the hospital”, said Ellsworth, who is also the ACCJ board liaison for the Healthcare Committee. “We believe [screenings] should be mandatory, particularly for members of identified high-risk groups, because this is the low-hanging fruit.

“If we can catch these cancers early, then the cost to the health service will be reduced, while there will be a similar lower impact on workers’ productivity”.

The screening rate for cervical cancer, for example, is 90% in the UK, 62% in Organisation for Economic Co-operation and Development member states, and a mere 24% in Japan.

GE Healthcare Japan, a gold sponsor of the white paper and one of its core compilers, particularly focuses on solutions for breast cancer, stroke and abdominal aortic aneurysm.

“These diseases can be prevented by good screening, and we are recommending that the government introduce adequate measures to promote early diagnosis”, said Jun Kawakami, president and CEO of GE Healthcare Japan.

GE also has high hopes regarding the application of information technology.

“The major paradigm shift from care to prevention—or from hospital to home—is an ambitious target, but the government and industry must cooperate to achieve this goal in the next five to 10 years”, Kawakami said.

“Many innovations will occur in the homecare market, where the devices and regulations are still not ready.

“From a healthcare IT perspective, we expect to see opportunities that enable a growing shift to home healthcare, such as through health information exchanges and telemedicine, where we move data rather than patients”, he added.

“Although past governments have taken a conservative stance in respect to the pace of the adoption of IT in healthcare, the Abe administration has indicated a potentially greater willingness to accelerate change by naming IT one of [healthcare’s] four core growth pillars, and the establishment of an Office for Healthcare and Medical Strategy within the Cabinet Secretariat”.

Other key headings in the white paper deal with in-vitro diagnostic testing, food with health benefits, as well as influenza and other potential biological disasters.

Women’s health issues are also high on the list of priorities, along with mental illness, a number of the most common infectious diseases, together with safety for health industry workers.

Ellsworth is particularly keen to see a pricing system in the industry that rewards innovation.

“In comparison with Europe and the US, Japan spends a large amount of its medical budget on old drugs and devices. If [the government] wants to stimulate innovation, they have to change the pricing system for the newest and best solutions”, he said.

“Creating this environment will enable doctors and nurses to spend more time preventing chronic conditions—such as obesity— and devoting less time to people who have become sick”, he said.

“The net result is greater opportunities in innovative medical solutions, exports that support the people and the national economy, people who are healthier and live longer and more productive lives with lower health costs for the nation”.

The EBC’s Risberg said the improvements that have already provided better care for people who need it are the result of different pressure groups—foreign and domestic—within the industry who have teamed up because they realised they have many goals in common.

“It used to be hard for the authorities to reach decisions, because it was very bureaucratic and everybody could come up with a reason why something could not be done”, he said. “We are keen to turn this around and present everything that is positive, what we can do, and how we can do it better.

“And anything that can be done is a thousand times better than simply saying something cannot be done”.

Risberg is full of praise for the way in which the two chambers have worked so closely together to compile a white paper outlining so much that is at stake.

“We share so many aims, but the one that matters the most is that we want the best medical results to be delivered to the Japanese people”, he said. “[The white paper] is a live document that can be updated and revised by any of the committees and we hope to have more collaborations like this in the future.

“We want a lot of the same things, so why would we do it individually?”