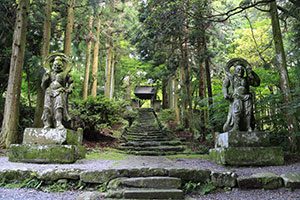 The entrance to Futago-ji, a temple on Kunisaki Peninsula.

Clouds get snagged on the forested hills and mountains that run down to Japan’s Seto Inland Sea as my plane approaches Oita Airport. Below, fishing boats dot the water and a ferry draws a white line across the bay. Although many places nationwide boast similar offerings to Oita Prefecture, it feels special.

Asami Kageura of the Oita Prefectural Tourism Board and David Bullington of the Kunisaki Tourism Association smile when I mention this at the airport. “I’m always learning something amazing”, said Kageura, who was born and raised here.

Bullington nods. “The people here are so open”, he said as we drive. “It’s an exceptional place”.

Kunisaki Peninsula
Our first stop, Kunisaki Peninsula, is just south of the airport but feels worlds away. Bypassed by train lines and highways, it’s forested interior—creased with mountains and valleys—remains much the same as it has always been.

“When our [temple’s] founder, Ninmon, came here he felt something special”, says Gojun Terada in the perfect English he gained during a three-year stay in the US. “So he built his temple here”.

Terada is the 66th abbot and the fourth of his family to lead at Futago-ji. This grand temple in the mountains comprises several halls that house carvings of stone and of wood, nearly all of which are more than 1,000 years old. Wearing his priestly robes and geta (traditional wooden sandals), Terada climbs the moss-covered steps to Okuno-in, a temple cave where the walls are etched with ancient Buddhas.

“There is no square land”, he explains with a gesture to the forest. “Our ancestors worked with nature”.

A serene and subtle feeling accompanies those who spend time here, one that is reminiscent of the mixture of Shintoism and Buddhism that is ingrained in every fibre of its esoteric culture.

The Kunisaki Peninsula will celebrate its 1,300-year anniversary in 2018, just four years after being named one of the Globally Important Agricultural Heritage Systems by the Food and Agriculture Organization of the United Nations.

The peninsula’s intricate irrigation system uses the natural environment to create a network of more than 1,000 irrigation ponds. This network provides water to farmers in numerous valleys.

A seven-year resident, Bullington is an enthusiastic proponent of his adopted home. He helps visitors organise accommodation, rent bicycles or trek along the Kunisaki Long Hiking Trail, a 137km course that visits some of the most spectacular and inspiring sights on the peninsula.

“There’s something for everyone”, he said with a smile. 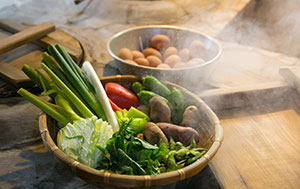 Beppu
“I had a tourist call me once and ask if there was a big fire here”, Kageura chuckles as we arrive in Beppu.

Indeed, great clouds of white steam billow up all along the winding streets of this onsen (hot spring) city. Visitors come, just as they have for centuries, to sit in the warm healing waters or marvel at the eight local jigoku (hells).

The vivid waters that bubble and steam year-round are visual evidence of why Oita ranks first in Japan for renewable energy, and second globally to the US’s Yellowstone National Park for geothermal power.

At Yanagia, a 110-year-old building that, in 2014, was transformed into a hot spring inn, manager Akiko Goto helps us prepare fresh vegetables and meat for jigokumushi (hell-steamed food). She arranges them in baskets that will go on a stone range to which steam from a nearby hot spring is channelled.

“This gets one minute”, she says, turning a practiced eye on a basket of bean sprouts topped with thin slices of pork and slivers of ginger. The pumpkin needs 15 minutes, she adds.

“People stay at the Touji Inn, but cook their own food”, Kageura explains over lunch. “Steam was an easy choice; and it’s healthy”, she adds before biting into a steamed banana.

Mineral-rich waters are also beneficial to the body, but they’re not the only option. Sand bathing, which started during the Edo Period (1603–1868), is also popular.

“If your shoulders are sore—or you have a stiff neck—this takes care of it”, said a woman burying guests in damp, warm sand. Left with only their heads visible, they snooze or chat while the heat works its 15 minutes of magic.

“Now we know how our vegetables must have felt”, quips Kageura.

Yufuin
A town set at the base of twin-peaked Mount Yufu, Yufuin combines Kunisaki’s natural beauty with the bounty of Beppu’s mineral-rich onsen waters. In the midst of lush fields and forests, it brims with cafés, shops, museums and galleries. Visitors can ramble among centuries-old buildings between soaks or after hiking the peaks and plateaus of nearby Aso–Kuju National Park.

At the base of Mount Yufu, Yufuin has a wealth of natural beauty.

Yunotsubo Street, a winding lane that runs 1km, begins at Yufuin Station and is full of artful edible wonders. The Four Seasons Selection of gem-toned preserves and pickles are a feast for the eyes as well as the palate.

Those with children in tow or who are children at heart in search of heartier fare will enjoy a stop at Snoopy Chaya—where everything from omelettes to dessert is graced by the famed beagle.

Onta pottery, Oita’s stoneware made by hand from local clays, can be found here alongside modern versions of other traditional crafts.

“On winter mornings there is often a mist rising from its surface that is quite beautiful”, explained Kageura when we reach Lake Kinrinko at Yunotubo’s far end. Fed by a hot spring and fresh mountain water, the small lake mesmerises visitors all year.

A few streets away is the forested ryokan (Japanese inn) complex of Sansou Murata, where we enjoy modern art at the Artegio museum and sample the adjoining restaurant’s famous roll cake with afternoon coffee.

As we watch silver raindrops slip from the surrounding trees, my original hunch is confirmed. From temple caves to hells to heavenly cake, Oita certainly seems to be something very special.