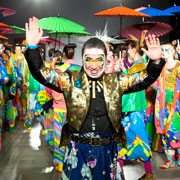 A Japanese fashion designer who shot to fame for his work on David Bowie’s stage wardrobe held his first runway show in 42 years in London on 1 November, The Japan News reported on 19 November.

Kansai Yamamoto became the first Japanese to show his designs on the UK capital’s catwalk in 1971, making his international debut.

The 2013 revival was held at the Victoria and Albert Museum.

This year’s show was themed “Basara”, a term referring to the extravagant spirit of the Sengoku era (1493–1573).