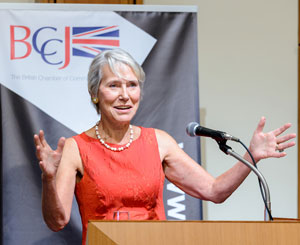 As chair of the board and chief executive officer practice at executive headhunting firm OB International Search Limited (Odgers Berndtson), trustee of The Economist Newspaper Limited, chancellor of the University of Hull, non-executive director at Smith & Nephew PLC, and a member of the international advisory council of Chugai Pharmaceutical Co., Ltd, her experience in the upper echelons of business is extensive.

Bottomley, who is also a member of the House of Lords, addressed members of the British Chamber of Commerce in Japan at The Peninsula Tokyo on 22 September. She explained how boards can achieve more balance and diversity, and presented arguments in support of this.

Based on her work for Odgers Berndtson, Bottomley said that firms are looking to fill the gaps in skills and to bring together different people who are going to fit. But, she noted, the terms of that conversation have changed.

When acting as a member of the supervisory board for Akzo Nobel N.V. from 2000 to 2012, she said she was the only woman on the board. “You look like a strange and rather frightening person”, she laughed. But this situation has changed drastically.

“The barrier has been broken—it’s not a majority, but it’s coming up to 10%”, she said.

Here, with Tokyo Governor Yuriko Koike and the appointment of Kanako Kikuchi as representative director and president of GlaxoSmithKline K.K. (GSK), female leadership is beginning to pick up speed as well. But there are still some deeper issues acting as barriers to women taking on leadership roles.

“One of the problems as to why women don’t develop their careers is because they sort of say no”, she explained. “They like to be encouraged and mentored and so they stand back”. 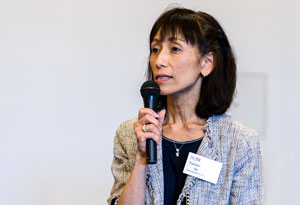 Yukimi Ito, head of the Communication Division at GlaxoSmithKline K.K.

During the question-and-answer session, Yukimi Ito, head of the Communication Division at GSK, spoke about the tendency of Japanese women to be respectful and shy, something deeply rooted in the education system.

“Japanese women are told to be three steps behind men, and still there are some generations that believe in that”, she said. “What’s your advice, and how can we encourage those shy ladies to be more proactive, demonstrate their skills and talk about it?”

Bottomley recalled the time when she was first asked by Margaret Thatcher, the then-prime minister, to become the minister of state for the Department of Health. “I had spoken about defence, transport, anything not to do with education or health, nothing girly—I was sort of being very masculine—so I said I don’t know anything about it.

“Now, a man would have said, ‘Prime Minister, I’ll bring a clear mind to the problem’. I mean, a man would never say, ‘I know nothing about it’—how pathetic”, she laughed.

“I’ve got a great thing about women: never apologise”, she said. “I often say to women in the UK, stop whining and start winning”.

International input
As Japanese and international firms look further afield, the relevance and value of an international advisory council is second to none. Having global input, debate and influence was something that Bottomley stressed. “It gives those firms [international] perspectives, it gives challenge, it gives debate”, she explained.

Referencing McKinsey & Company research, she suggested that there is a strong case for businesses to pay attention to cultural sensitivity. 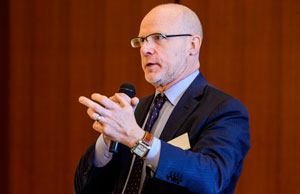 Paul Hunter, secretary general of the International Bankers Association of Japan, asked about the benefit of having an international advisory committee and the issue of language in this.

“You mentioned earlier about the high prevalence of overseas nationals who are on boards in the UK … how could [boards in Japan] be internationalised a bit more and [what is the use of the] international advisory committee?” he asked.

“In the UK, there is massive offshoring, so many businesses are investing in India or China, and to have the whole of the board being little-Englanders … it just isn’t relevant, how could they judge, advise and scrutinize without global experience? I always feel you have to argue the business case, and that’s how it happens. But the advisory board is quite a clever way through … a lot of non-British firms in the UK who want to have a British identity will have a UK advisory board”, Bottomley responded. 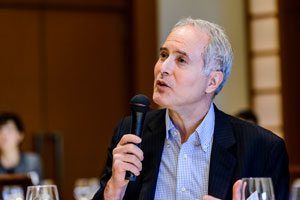 Nicholas Benes, representative director of the Board Director Training Institute of Japan

Nicholas Benes, representative director of the Board Director Training Institute of Japan, asked, “What is your advice to the closed island nation of Japan, with a much more homogeneous society than yours, where change is not something people are comfortable with?”

Bottomley believes that one crucial issue is providing better conditions for women at work. “If you make it more acceptable for women to continue their careers once they have had children, then they are more likely to have them”, she said. A large part of this is providing a flexible environment.

“So if what we are saying is that business is going to be evermore competitive, evermore global, maybe its needs-must, respectfully, of the traditional culture in Japan”, she added.

Ken Katayama, cybersecurity and privacy policy lead at Microsoft Japan Co., Ltd., asked about maternity and paternity leave, noting that his firm had recently expanded what it offers. “I was just wondering what your ideas are on paid leave— maternity or paternity leave”, he said.

“Well, I personally don’t think that when the baby is born it is the hardest time”, Bottomley laughed. Instead it is as the child grows up and goes to school that things get tough, she said.

But, the idea of paid leave should not be a problem, she added. “People go off on business degrees, men do leave work for different reasons, and it has not been acceptable for a women to do this. Now there are crisis times for women when her children are going to secondary school”.

She explained that what is crucial here is flexibility and affordable childcare.

A lot of this is related to culture, but it also, “works partly through celebrities, through generations and then through enlightened best practice in business”. Many businesses want to show best governance, be socially responsible and practice diversity. The ones that do not adapt will find people will go to international firms for work. 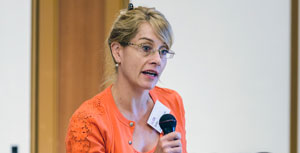 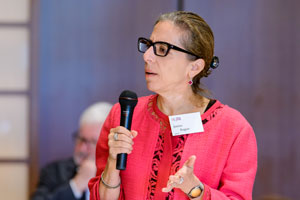 The final question came from Jenifer Rogers, non-executive director at Mitsui & Co., Ltd.: “I would be curious if you have any thoughts on how quickly change can or should happen and, maybe, some of the ways to improve the business case, or encourage Japanese boards’ activism … to go down the diversity and inclusion route?”

“I absolutely think that if we all think the same way, then we are not going to get to where you need to be”, Bottomley replied. “Different nationalities, personalities and genders are required to get the best solutions, and that is a business argument.

“I think we are at a tipping point, and it comes from all sorts of angles. Some of it will be about high-profile and successful females, some of it will be international firms putting pressure on their way of working, but a lot of it is going to come from the pressure of the work force—Japan needs its top talent”.