Last December, a tunnel on one of Japan’s key arterial highways collapsed. Among the grief and sadness that followed this accident, one lady’s comment stood out: “You can’t even trust the tunnels in this country anymore”.

Historically, despite a revolving door of governments and political leaders and a trail of corporate scandals, trust has been surprisingly stable here.

So, the huge drops in trust last year seem not to have been a reaction to the 2011 Tohoku earthquake and tsunami. Rather, they seem to be the result of frustrations pent up over many years.

The triple disaster was simply the straw that broke the camel’s back and changed the trust profile in Japan.

As illustrated by the woman’s reaction to the tunnel incident, this year’s Edelman Trust Barometer shows how widespread and deep-seated the lack of trust is in institutions.

We believe that trust in institutions has been permanently damaged, and that Japan’s trust profile is now closer to that of Europe than to the profiles of other Asian countries.

While there was a small rebound in trust across the board, trust in the government remained at the lowest recorded level: 32%.*
This was almost the same ratio as the low level of trust in non-governmental organisations (NGOs): 37%.

Now, trust in NGOs in Japan is about half the global average. That’s due to the perceived failure of NGOs to achieve post-disaster relief and reconstruction objectives, as well as concern regarding what has become of donations.

The ratio of people who trust NGOs a great deal (6%) is well below the global average level (22%). People seem to have lost faith in NGOs’ ability to bring about real, sustainable change. In addition, transparency remains a huge issue.

The monocultural nature of Japan means local businesses and brands historically have attracted a trust premium over their foreign competitors.

However, during the past year, we have seen well-known Japanese names announce huge financial losses and layoffs. The global criticism maintains that they have lost the edge in innovation.

Events have combined to cause Japanese to lose faith in their own firms. At the informed-public level, this represents a fall of 10 points to 71% over the past two years.

*Informed publics now have almost as much trust in German firms (67%) as they do in those from their own country.

But the decreased trust in local firms is providing opportunities for foreign firms.

It is interesting to note that not one of the smartphones that are in the top 10 in terms of sales in Japan is produced by a Japanese manufacturer.

In recent consumer surveys, foreign airlines have ranked above Japanese airlines for service. The local premium is beginning to erode.

The time is right, and the door is wide open, for foreign firms in Japan.

However, the opportunity is not the same for all foreign firms.

The territorial rights issues with China, Russia and South Korea that have occurred over the past year have had a huge impact.

Trust in Chinese firms has plummeted 27 points to a mere 3%, while trust in South Korean and Russian firms has similarly fallen (25 points) to 16% and 14%, respectively.

Meanwhile, trust in UK-based firms jumped 11 points to 61%, bringing those firms back into the zone of trust.

When we look at the attributes needed to build trust in Japan, we see a picture that may suggest greater opportunities for firms from the developed world.

Integrity-related issues—such as whether a firm takes responsible action in the face of a crisis, and whether it has transparent business practises—are not the only areas in which stakeholders have greatest business expectations.

But they are the areas regarding which people are most convinced that business is not performing.

Some 48% of respondents cited transparency as important, although only 8% said they believe firms are doing well in this area.

Fully 45% of respondents said they communicated frequently and honestly on the state of a business. Yet only 8% believed that a good job was being done.

This year’s Trust Barometer data suggests that Western firms, who have a long history and experience in the proactive communication of integrity and transparency, probably have a small window of opportunity to leverage that experience in gaining a competitive trust advantage in Japan. 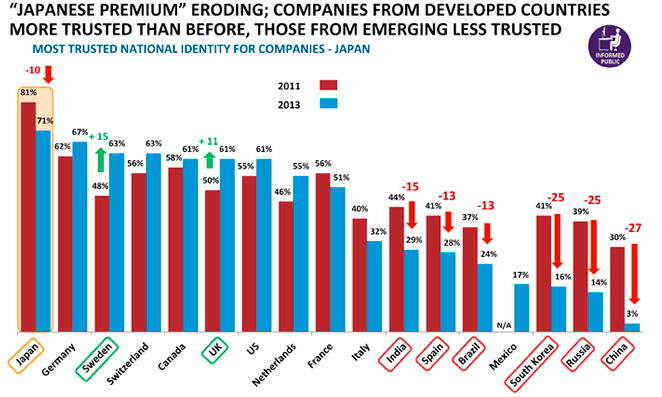