The 19th Japan Market Expansion Competition (JMEC) has produced a new crop of 62 talented and capable businesspeople, with Team Aurora emerging as the overall winner.

This year, the contest again was fiercely fought and attracted 11 teams, up from the eight that had participated 12 months earlier. They were feted at the annual awards ceremony at the Tokyo American Club on 5 June.

Founded by the Australian and New Zealand Chamber of Commerce in Japan in 1993, the competition is today supported by 17 foreign chambers of commerce in Japan. The idea of the competition is to have entrants work in teams to sharpen their skills as up-and-coming managers, while at the same time helping each client firm develop a high-quality business plan tailored for the Japanese market.

Announcing the winners of this year’s competition, BCCJ President Emeritus Philip T Gibb OBE emphasised that the JMEC contest is challenging and time consuming, but that those who have been put through its paces will have learned a great deal about themselves and their ability to work in a team.

“JMEC, in my opinion, is the best practical business training and learning experience that there is”, Gibb said. “And what makes it even more remarkable is that all those taking part had to do [the work for the JMEC competition] in addition to their regular jobs”.

The reports submitted by the teams were equally impressive.

“The quality of some of these plans was far superior to some that have been put together by professional marketing companies, and that for a measly ¥1.2mn”, he said.

“Team Aurora’s presentation and thinking was as good as anything I have seen from marketing agencies in ‘real life’”, said Dominic Carter, CEO of The Carter Group and project client of the winning team.

“They took my concept forward in such a clear and convincing way that I intend to use the JMEC plan to launch the Wa Group business starting pretty much immediately”. 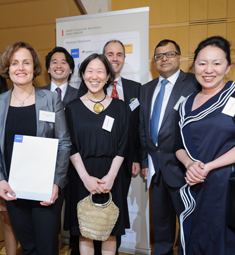 “The JMEC team did a tremendous amount of research on the value that students and companies put on an MBA, their motivation in committing to an MBA course, and an analysis of the competitive set for our EMBA market”, Mori said.

“The team’s recommendations were well laid out and gave us reasons to expect that following their business plan will lead to the outcomes they project.

“JMEC exceeded our expectations”, he added. “Temple is very pleased with the JMEC business plan and our long history as a JMEC sponsor organisation”.

The prizes include tablet computers from Hewlett-Packard (for the first-place team) a well as British Airways return air tickets to London, and domestic air tickets from Jetstar Japan—JMEC’s newest sponsor.

To date, there have been 954 graduates of the competition from more than 54 countries. There have been 178 business plans written for JMEC project clients, including some firms that are household names around the world, such as Dyson, Bang & Olufsen, The Financial Times, Lloyds TSB Bank plc and Waterford Wedgewood plc.

The JMEC 20 programme is scheduled to begin in August, with information seminars held to enable potential participants to find out more about the programme.

As happened this year, the schedule for the coming year has been broken down into four phases, the first period of training and development to run from November to December.

The lectures and workshops will focus on entry and expansion into the Japanese market and business planning, and will be followed by preparation of the business plan for five months from January.

With guidance from a mentor and a business consultant, each of the teams will be required to develop an effective plan for a firm operating in the Japanese market. The plan will cover the areas of business strategy, marketing, distribution, finance, organisation, human resources and legal issues.

The plans will be judged in May, on the basis of written and oral presentations, before the winners are announced next June.

Publish your best Japanese nature photograph on one of the BCCJ social media sites for your chance to win the use of a Land Rover for a weekend.