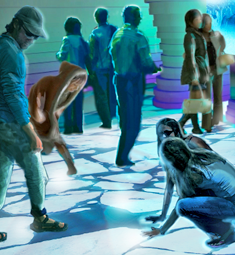 
The ambitious project—named Orbi—was developed over two years with close involvement from BCCJ member firm, Eat Creative K.K. Unveiled on 29 May, the project’s park will open in Yokohama’s Minatomirai district on 19 August.

“The BBC has been producing wonderful wildlife footage for more than 50 years, and we have decided to try to create something that will be distinctive in the world”, said Sega President and Chief Operating Officer Naoya Tsurumi in a press conference. “We have been able to create outstanding content that has never been seen before”, Tsurumi added.

Orbi, which takes its name from the words “orb” and “orbit” and is designed to have appeal across all nationalities and generations, will be the world’s first “supercharged nature experience”, he said.

“We want to offer an experience that people can’t get even in the real world”, he said, explaining that this includes, for example, the experience of being in the middle of a stampede of 1.3mn wildebeest.

As well as high-resolution images and the sound of being caught up in the creatures’ annual migration, the attraction will incorporate the vibration and shock waves caused as the animals’ hooves hit the ground.

“We want to transport people from their lives in the middle of the metropolis to the heart of the natural world”, he added.

Eat Creative has been central to Orbi’s global brand development, naming and visual identity since 2011. “We’ve worked closely with the BBC and Sega”, said Executive Creative Director Steve Martin, as he described the one-of-a-kind experience.

“We’ve created a ‘living’ logo that can change and grow as the experience evolves”, Martin said. Integrated into all aspects of the experience, both physical and online, the logo has evolved into a device that becomes a guide as you explore, transporting you between interactive experiences and providing facts and figures along the way.

Orbi will be spread over nearly 4,800m2 in the city’s new MARK IS Minatomirai building and it will take visitors around two hours to complete the tour.

Orbi will be a journey in three stages. Visitors will initially enter what is termed the pre-show area, which invites them to explore some of the mysteries of the Earth by travelling to 12 different zones, including soaring through the skies, travelling to the depths of the oceans, hiking through dense jungle, and even braving -20°C temperatures in a room that will be a recreation of the Arctic.

Visitors will also be able to learn about biology by communicating with life-size projections of animals through camera recognition sensors.

The main show is a spectacular theatre experience that portrays nature on a grand scale. The 340-seat auditorium has a wrap-around screen that stretches 40m edge to edge and stands 8m tall, making it the largest display panel in Japan.

The theatre will make use of BBC Earth’s vast stockpile of nature images to create an original 20-minute story produced by the BBC specifically for Orbi, and building on the international successes of groundbreaking television series such as Blue Planet, Life, and Planet Earth.

Beyond the visual and the 3D super-stereophonic surround sound system, Sega is using its technological knowhow to work additional elements into the presentation. This will include the use of smells, a fog generator, blowers to recreate for the audience the sensation of wind, and flashlights to create lightning.

The post-show section—the final area through which visitors will pass—will offer a behind-the-scenes look at how the BBC captures its spectacular wildlife footage and will include a shop and cafe.

“The BBC films the greatness of nature and tries to spread that information around the world”, said Ken Munakata, president of BBC Worldwide Japan Limited. “By using augmented reality, we have been able to spread this knowledge through commercial facilities so that more people can share the experience and we can expand our business.

“Orbi is the next major step for us, and we want to work with Sega to bring the appeal of nature to as many people as possible”, said Munakata. “We have been able to create an unprecedented project in a multi-sensory way”, he added.

The BBC and Sega have declined to reveal the scale of the investment in the new Yokohama park, but have confirmed that they plan to use it as a showcase to build further theme parks around the world.